Derailed, In More Ways Than One 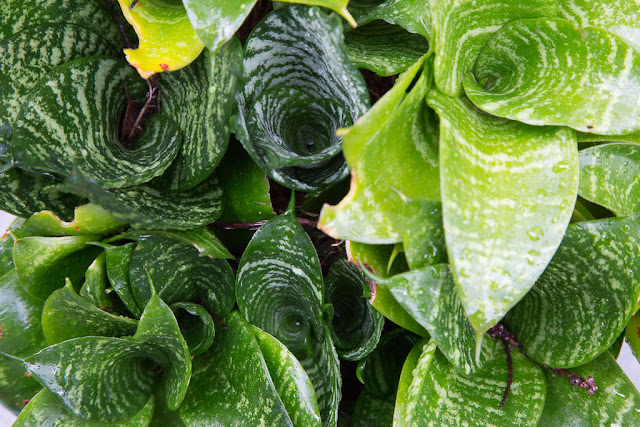 Well, yesterday's travels were certainly eventful. Ultimately they were successful, and I'm now in Florida, but there were times I didn't think I was going to make it.

I carefully checked the Transport for London web site before I left home, and saw that there were no tube outages. The trip planner recommended that I go to Victoria Station and take the train down to Gatwick. One hour, it said.

But what the trip planner didn’t say was that there had been a train derailment outside Victoria at 3 a.m., and all the trains were in chaos. All Gatwick Express trains were cancelled, as were many others. People were milling around Victoria by the hundreds, looking uncertain. I wound up having to take one train — which moved at a snail’s pace — down to East Croydon, and then changing to another train for Gatwick. The journey took more than two hours, and I had just enough time to check in, get through security, buy a Starbucks and get to my gate before boarding my plane — which wound up being delayed about half an hour anyway.

As I stood in line next to a duty-free shop while waiting to board, my anxiety slowly ebbing, two American guys — possibly a father and son — were talking behind me. Clearly they had never been in an international airport before.

“Duty Free? Is that the name of the shop? That’s a strange name. What does that mean, Duty Free?”

“It’s confusing. It’s like Chick-fil-A. Why’s it called that? What are they filling the chicken with?”

On the plane, I managed to read most of "Lady Chatterley's Lover," which I've long been curious about. It's a remarkably frank book for its day, but of course now it hardly seems scandalous. I didn't realize how much of it was about ecological, social and economic concerns in post-World War I England. There's a lot of that woven in with all the sex. Lawrence was clearly concerned with how we could all live authentic lives in the midst of not only stifling morality, but also soul-sucking industrialization and capitalism.

Finally, after nine-plus hours of flying, my stepsister and her husband picked me up from the airport in Tampa and took me to dinner. We wound up going out afterwards, and we ran into some old co-workers of mine from my years in journalism, with the end result that I am not just jet-lagged but also hung over. I'm not sure how effective I'm going to be today. 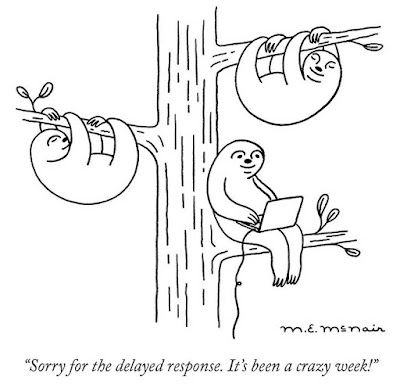 My brother sent me this New Yorker cartoon because he always jokes that this is what my blog is like -- me talking about how busy I am doing nothing. Prepare for more of the same!

(Top photo: Plants on my stepmother's porch.)
Posted by Steve Reed at 1:17 PM

Gawd. That all sounds awful. I'm really glad you finally made it to Tampa. I think that you should designate today as "rest day". How strange that you ran into people you knew so long ago. I mean, Tampa is not a small town.

there are times when having a car is the best way to go but glad you made your flight. now a day to acclimate to hot and steamy.

I'm glad you made your flight. And at least you're getting the hangover over with at the same time as the jet lag!

Brothers always know how to tug our sleeve, don't they? Well you certainly had a busy and heart-stopping day yesterday! Welcome back to what is becoming known is these parts as Terrible America.

Welcome to the USA. I almost wrote "Welcome Home" but your home is now England, so Welcome Back.

Why is it so hard to get updated info on such catastrophes as derailed trains?? It's the same here -- a truck falls off the helix into the Lincoln Tunnel and all is chaos and the cops and the transportation authority stand around looking at each other for the next six hours while traffic comes to a stand still.

What is sadder than you suppose is that that father and son actually have travelled quite often to and from international cities and they STILL can't figure out "Duty Free".

Well that was quite a trip to the airport. Glad you made it on time and then to Florida. Have a wonderful time in your home state. Looking forward to the pics you'll be posting. Love that comic!

That conversation made me laugh out loud. Makes me wonder where they live. What a nightmare with the train situation. Reminds me of the time I stayed in the Air B&B in Balham. It seemed like there was a train problem every day. That convinced me never to stay that far from the city again. Welcome to America where our idiot leader thinks he runs England as well.

I guess we're seeing the results of the dumbing of American in those two trying to decipher the meaning of Duty Free. Glad you made it to Florida unscathed.

Wow - that was cutting it close getting to your plane. Good thing you left lots of time to get there.

I like your "busy doing nothing" - maybe because I like the small details of life and maybe also because you write it in an interesting way. Keep on, please!

And I like Ms Moon's suggestion of a rest day. But then I'm always up for a rest day :)

Gawd, why would you deliberately go to Florida in July?

What a relief that you made it to the airport on time! I bet that there will have been many missed flights. "Lady Chatterley's Lover" is a fine novel and it is a shame that it so often caricatured - as if all it was about was the sexy interludes.

That conversation reminded me of the US exchange student who travelled with us to Rome and who wanted to invite us to a truly Italian meal on his last day - it was quite challenging for him to understand that no, Pizza Hut was not the place to go to.

Travel is such fun, isn't it? But glad you finally made it.

Well, that was a gripping tale! So glad you made it and you certainly deserved those drinks, hangover or not. The photo is gorgeous!

It always seems that travel to and airport is tense. Our nearest airports are 90 miles.

I am very happy that our holiday this year just involves us driving to Gloucester and getting on a boat for a holiday cruising the River Severn. No airports, no flying, hopefully no traffic hold ups, but we are going the day before, to stay in an hotel overnight, so no problem! Oh, and the temperature should be bearable.....anything over 20c and I am not comfortable.Enjoy Florida.

Enjoy the US
IM MISSING U ALREADY

Tell your brother that I, for one, love reading your "nothing." It soothes me, and there's the bonus of Olga and your incredible street and nature photography.