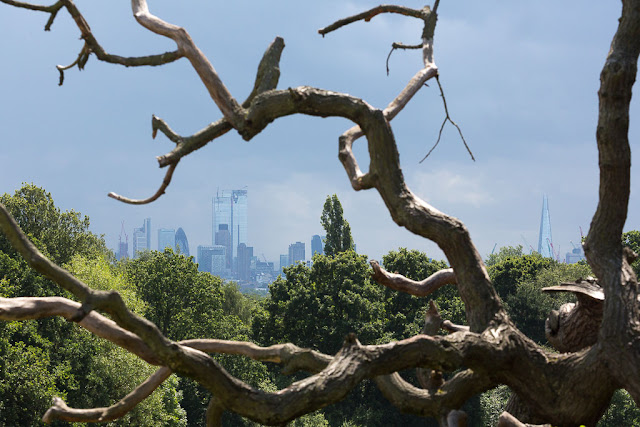 Olga and I went back to Hampstead Heath yesterday, which I know made her happy. Dave walked her while I was in Florida, but he's not exactly a fan of walking the dog, and he didn't take her as far as the Heath. So she was ready for some off-leash adventures in the woods. The rosebay willowherb, which is known as fireweed in the states, and the yellow ragwort are blooming up a storm. 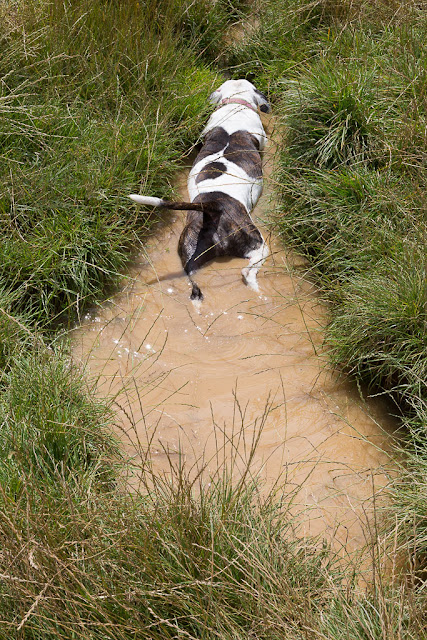 Olga, of course, found a muddy puddle in which to relax. It's a spa treatment of sorts. 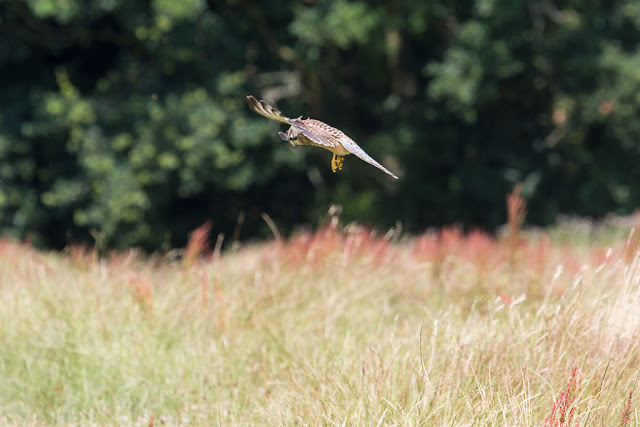 We also saw a kestrel hunting in the fields. It would flutter above the long grass, hovering and looking for prey, and then dive down to grab whatever looked appetizing.

The temperatures were pleasant, but we're supposed to get into the low 90s F later this week. This morning the starlings, having a noisy squabble on the bird feeder, were interrupted briefly by a bright green parakeet.
Posted by Steve Reed at 7:09 AM

She looks so happy and I'm sure you were happy ambling about after being on the road so much!

Great shot of the kestrel!
I bet that you were as happy as Olga to get out and ramble.

Good to see Olga out for a nice long walk. Beautiful photo of that kestrel.

Kestrels put on a great show with their hunting tactics.

I love that first photo. You've framed the skyline beautifully. And, the kestrel photo is pretty spectacular too. And, Olga looks so happy in the weeds....and the mud.

What a happy dog Olga is! She is lucky to have you both. Or vice versa.

We have tons and tons of these green parakeets now. They love feeding off the hornbeams at the moment and make the biggest racket. I was told by a serious birdwatcher that they always sleep as a group in the same one or two trees and never miss their night time gathering rituals.

Olga has a good life! She knows it, too.

I'm working a jigsaw puzzle with fireweed on it (I think - I wasn't sure what flower it is, but it sure looks like your picture). Cool!

Love the gnarled tree in photo #1.

And, as always, LOVE OLGA :) She looks so doggone happy!

Are you getting the heatwave from North America? Good luck with that!

nice shot of London through those gnarled limbs. I'd like to get some fireweed but I don't know if it will do down here. I've only seen it in the wild in the Northwest.