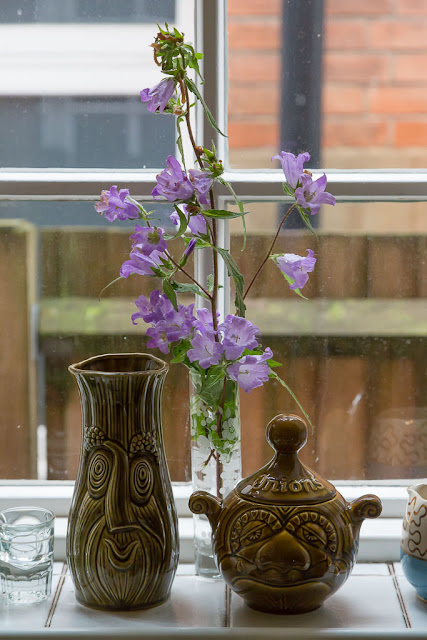 Well, we had some domestic drama yesterday.

Rain was in the forecast, so I hadn't intended to take the dog on any long walks. But we got a break in mid-morning and she was getting antsy, so I decided to quickly walk her around the neighborhood. I grabbed my umbrella and Olga and set out.

Dave was home, so I wasn't especially careful about what I took with me, and only after I'd closed the front door did I realize I didn't have my house keys or my phone. (The door locks automatically when you close it.) I rang the doorbell, but he didn't answer. I figured he must be in the living room, at the back of the house, wearing his noise-cancelling headphones.

This gave me pause, but I decided to just walk the dog and then hopefully, by the time I got back, Dave would be able to hear the doorbell. So that's what I did. About half an hour later, I was back at the front door, ringing -- but no Dave. I rang and rang. I stood there for what seemed like an eternity, Olga looking at me quizzically, like, "Why don't you just open the door like you always do?"

You can imagine how frustrating it was to know Dave was inside but unable to hear me. And of course, I couldn't even text him on the off chance that he'd see or hear my message.

Finally, seething with anger, I tied Olga to the front porch railing, walked to the side of the house, carried one of our heavy trash bins to the garden gate, climbed up on the bin and hoisted myself over the top of the gate. I got covered with dirt and drenched with rainwater from the shrubbery and the bin. I came to the back door where Dave could easily see me through the glass, looking as disheveled as Bigfoot. He opened it, completely confused. (And of course by this time he had his headphones off.) 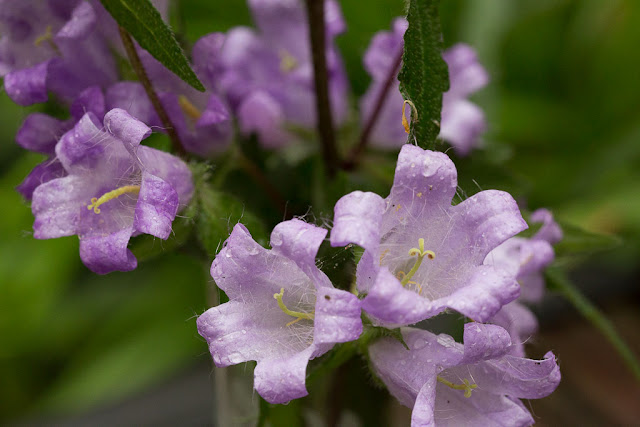 I proceeded to stomp around, cursing and venting. I acknowledged right away that the situation wasn't all his fault, and said I was angry at myself too, but that it was infuriating to be unable to reach him when I needed him. I took a shower and put on clean clothes, and that calmed me down a bit. Then Dave and I talked. He was genuinely puzzled and hurt that I would blame him at all. After all, I'd forgotten my keys and my phone. This led to a whole conversation about the nature of anger and its expression. I told him I understood it wasn't rational, but anger isn't rational or intellectual. It's animal. I just had to let it out.

After a few hours, it all seemed kind of ridiculous, and we were able to laugh about it. Then last night, we were watching "Big Little Lies" when one of the characters said, "This is what families do -- we get angry with each other, then we get over it." I pointed at Dave, and said, "There you go!"

Anyway, next time I'll remember to bring my keys whether Dave is home or not.

In the process of hoisting the rubbish bin up the garden steps and positioning it next to the gate, I broke off a stalk of some kind of campanula that grows wild in our side alley. I put it in a vase on our kitchen windowsill (top). It's a nice flower but we almost never see it under normal circumstances, because we never use that part of the side alley. Looking at the blossoms close up, I'm amazed at how hairy they are. 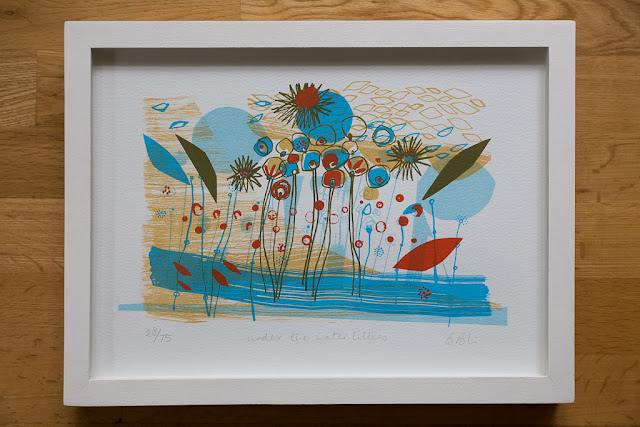 While walking Olga on the high street, I saw this print in the window of our local Oxfam charity shop. I went back and bought it later in the day. It's called "Under the Water Lillies" by UK artist Becky Blair. Isn't it great?

So at least something good came from that ill-fated dog walk.

I spent most of yesterday afternoon reading "Outside Looking In," by T. C. Boyle, a novel about the early years of LSD experimentation under Timothy Leary at Harvard. It's an excellent book. I may finish it today. I'm not sure I'd recommend it to kids at school, but it's good for the adults!
Posted by Steve Reed at 7:25 AM

I so understand your crossness! It seems that whenever I really really need to contact my OH he doesn't hear his phone or it is on silent, or some such excuse when I eventually get through to him !

"But we got a break in mid-morning" - could be misinterpreted. Did you have a "break in" - presumably by a robber - or did you have a short rest period - a "break"?

I disagree that LSD is good for the adults! I tried LSD a couple of times in 1971 and it blew my mind. I am still trying to get back to normal.

Yes. That's what families do. And I'm sure that a counselor would have a heyday with that story. You were locked out of your own home. Your mate, your partner was seemingly oblivious. It was like a nightmare in some ways. I'm so glad that it all got worked out and you got that pretty print. It is gorgeous!
I haven't read that TC Boyle book. I don't think I have, at any rate. I love his books. I'll look for it.

Quite the the day of drama. You will look at your new print in time to come and recall this day and laugh - I hope.
Alphie

That must have been a very frustrating experience. I'm so glad my door doesn't automatically lock when I close it. Of course, that leads to having occasional worries that I've forgotten to lock it when I'm far away from home. I've certainly walked back to the door many times to make sure.

Many years (decades) ago, pre-mobile phone days, I got locked out of my ground floor apartment by my almost 3-year old son who shut and locked the sliding door behind me when I just stepped out to retrieve our bulldog who had escaped from our porch. Did I mention I was very pregnant, wearing a kaftan, it was 90 degrees out and I didn't have a leash for the dog? The kiddo refused to unlock the door and the front door was locked, too. Had to find a neighbor to use their phone to call my husband home from work. Meanwhile, the little blighter just stood looking at me through the glass with a beatific smile on his face. Almost two hours later, I got in, but was so furious I couldn't even get near or talk to him. The good news? The kid lived--he's about to turn 45. Here's to the F word---Family. :)

We have a very well-hidden key outside in our backyard. If we ever get locked out we know how to get in. It is a bummer getting locked out. Glad it all worked out.

Oh , I've gone through many issues like you where I get really mad and it's something I brought on myself.

you never mentioned retrieving Olga as you stomped around and vented and then had your talk with Dave. I kept expecting you to write that you had completely forgotten about her out there but of course not. I've only ever locked myself out of my car, not my house.

Sorry you went through that...

Funny that you should end your day reading "Outside Looking In" as that was exactly what you were doing earlier.

My husband has gotten more and more hard of hearing and won't get a hearing aid, so after many frustrating episodes similar to yours, I decided just to prepare as if I live alone. I take my keys. EVERYWHERE. Even just to water the plants on the front step! Because he's been known to pass an unlocked door and lock the d*** thing - lol

I love that picture. You scored with that :)

Lol, poor Dave. But I think it speaks to the health of your relationship that you could vent your feelings, and then you could talk about it later, and even laugh about it.

I thought the same thing that Ellen did, since you included the detail about fastening her to the front porch, that you would remember poor Olga hours later.

Oh man how FRUSTRATING! And interesting that you wrote about it today since Mike & I are staying in a hotel tonight prior to his back surgery tomorrow. We were joking that if we lock ourselves out of our room at least the hotel staff can let us back in (unlike the time we locked ourselves out of the house at 5:30 am prior to my surgery two years ago). Love the print!

Oh I just loved this post and I laughed my hiney off. I even read a portion to my daughter and she was nodding her head in agreement saying "I have been there" lol and I think that in one way or another we all have.
I know I have. From locking myself out of my home and losing the fob on my car keys to unlock my doors on my vehicle. Ugh the upset is always dramatic. Once I lost my car keys in the lot of a supermarket and the next day I locked my keys in my car. Both times I was lucky. I found my keys by sheer luck in the parking lot of the store and a friend with me had a set of keys and I had forgotten I had given him a set when he came to get my car to take to the shop. Yep I was lucky but I was ranting and raving and stomping around calling myself every name in the book.
So glad that you and Dave had a chance to talk about it all and then have a good laugh at it. Still I can just imagine how confused Olga was.

I just love the plant that you put in water but I totally love the vases. Can you tell me who makes them and where you got them? They are right up my alley. Thanks. Beth