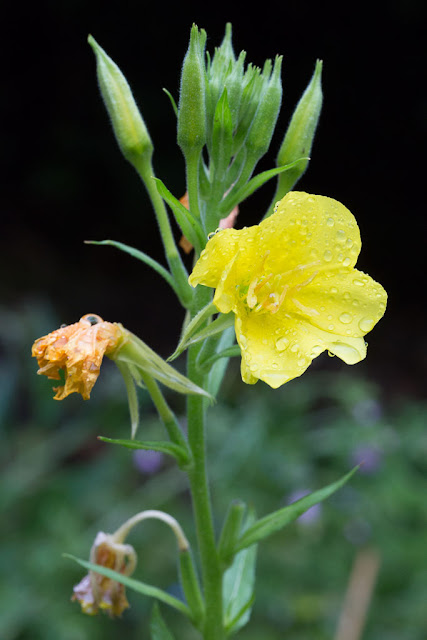 As promised, here's a shot of our evening primrose, blooming after yesterday morning's rain. It's supposed to be great for bees, so we're happy to have it!

I didn't tell you about Saturday's big drama. Remember how devoted Olga is to her Kong toy? It's her security blanket. She carries it everywhere, and she associates it with fun because it accompanies us on all our outings. Whenever she's excited about something, she runs to get her Kong.

Well, we were walking back from the Heath along Church Row in Hampstead when she dropped it. That isn't unusual -- she drops it all the time -- but this time it bounced through a fence and down into a recessed patio off the basement of one of the multi-million-pound houses on that street.

(I'm not really sure what to call this patio. Is it a light well? An airshaft? In any case, it's only accessible via the ground floor of the house -- there are no steps down from the street itself.) 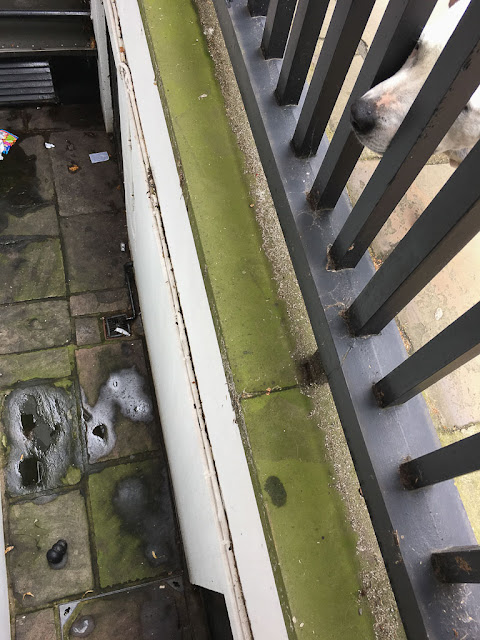 See the Kong, down on the basement patio at lower left? And Olga peering despondently through the fence at street level, upper right?

I rang the doorbell of the house, but no one answered. I went to the quaint little restaurant next door, but they didn't have access to the patio. My only option was to write a note to the residents of the house explaining what happened, put it through their letterbox with my phone number and hope they'd call me. We abandoned the Kong, and Olga was not happy -- as we walked away she kept pulling me backwards as if to say, "Hey! We've forgotten something important!"

I thought about the situation as I was lying in bed that night. I wasn't thrilled about waiting for a call. What if whoever lived at that house was away for the summer? What if it was someone's second home? What if no one lived there at all?

I began considering other options. Could I retrieve the Kong with a garden rake?

A cursory inventory of our garden shed yesterday morning revealed that we don't actually own a garden rake -- but we do own a sort of three-pronged garden hoe on a long pole. I thought that might work.

So Dave and I walked back to Hampstead, carrying the hoe. (Dave joked that he looked like Oliver Wendell Douglas from "Green Acres.") When we got to the house the Kong was still lying where we'd left it, and again, no one answered the doorbell. Dave tried to reach through the fence with the hoe, but the handle wasn't long enough. Even with his long arms, we were a few feet from reaching our goal. The floor of that patio has to be at least eight or nine feet below the street.

As we walked back home, inspiration struck. We needed string. 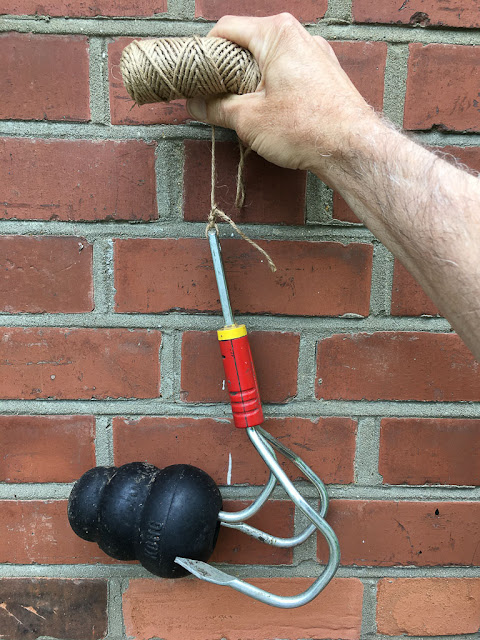 I tied a ball of twine to the detachable head of the hoe, and carried it back to Hampstead. My giant fishhook worked like a charm! Within minutes, I'd hoisted Olga's Kong out of that rich person's basement patio. Although I wasn't doing anything wrong, I was vaguely aware that I might look somewhat suspicious to a passerby -- fortunately the police didn't show up to question me.

I felt compelled to leave another note telling the residents how I'd solved the problem, and saying, basically, "Never mind!"

So how's that for some tool-making ingenuity? I definitely feel justified, at least for a day, in claiming the evolutionary designation of "higher primate"!
Posted by Steve Reed at 6:38 AM

You guys are awesome!

What ingenuity!
Incidentally, the space it had fallen in to is called the 'area' and is [usually] accessible by the 'area steps' which allowed deliveries directly to the kitchen.

Uknown: Thanks for the info! I did notice that other "areas" had steps to the street, but this one -- for whatever reason -- did not. I guess the steps had been taken out at some point.

Wow and wow again! The lengths you had to go to, just to retrieve that Kong from "the area" (new term for me, thanks Unknown). I am not sure whether you have actually photographed said Kong before or displayed it to us, but I was fascinated to see it closer up. For some reason, all previous references to the Kong raised images of a frisbee-like toy - certainly something shaped like a saucer. It took me a fair while looking at the first photograph to actually find the Kong at the bottom of "the area."

It might have been easier just to buy a new one? I hope that Olga was suitably grateful for the return?

In American street language a "hoe" is a promiscuous person - usually a woman with little sexual inhibition. Dangling a "hoe" over railings is not usually the done thing in cultured Hampstead. When you are back in Florida you will be able to do as much hoe dangling as you like.

Lots of worry in this one between Dave and Olga. Now I'm curious about what's going to happen with your notes!

I wonder if they will call you about it?

I can't believe you got the prongs of the cultivator (that's what the rake like thing is) into the kong especially on the end of string!

Well done! MacGyver has nothing on you!

That is truly an act of love. Very impressive work there, and really I don't know how you got those prongs into Kong. Well done!

That was ingenious. I'm impressed that you could maneuver it onto the hooks while it was on that rope. I probably would have knocked it further away. Good job!

those quarter machines in every lobby of Fred Meyer, would be panic stricken to see you coming! You could win every toy in the bin! Good job, sir!! Brilliant. Olga has a couple of amazing, devoted, Dads.

Yup. You must have had to swing those prongs mightily to get them to imbed themselves in Kong. Good job.

I feel a little cheated that there's no video of this amazing accomplishment! Also, YP is hilarious as usual (for the record, YP, I don't think dangling of hoes is ok in Florida either).

I loved reading this - Olga is a lucky girl, and you're definitely a higher primate to figure out that solution!

Higher primate, INDEED!
Olga would be so impressed if she understood what you and Dave had gone through to get her beloved Kong.

This is just the sweetest story - what you've gone through for your Olga. Now I think you should go out and get a second Kong to have ready in case something like this ever happens again and you can't retrieve it!

That was a very creative solution! I'm sure Olga is happy now but a back up Kong would not hurt either. Good job on the retrieval!

The kind of hoe you're talking about is spelled "ho" in American street language...just fyi.😃

I might have had to buy Olga a brand new kong! That was a lot of work, Steve!

...and now we know the true meaning of Puppy Love!

Thanks for all the comments, everybody. (Possibly the most I've ever received on any single blog post!)

Yes, YP -- Jennifer is right when she points out the correct spelling of "ho." Although the plural might be "hoes."

We actually DO have a backup Kong for Olga, and we pulled it out to tide her over during the period hers was inaccessible. But I feel like she could tell the difference! It seemed very smooth and cold and new, and surely Olga wanted the well-gnawed texture and all the smells and tastes of the many places her old one had been. Her Kong is such a part of her that I didn't want to just let it go that easily. So possibly my own sentimentality was the real driver here, as opposed to Olga's needs. :)

No video, sadly, because there's NO WAY I could have been filming AND trying to work that hook!