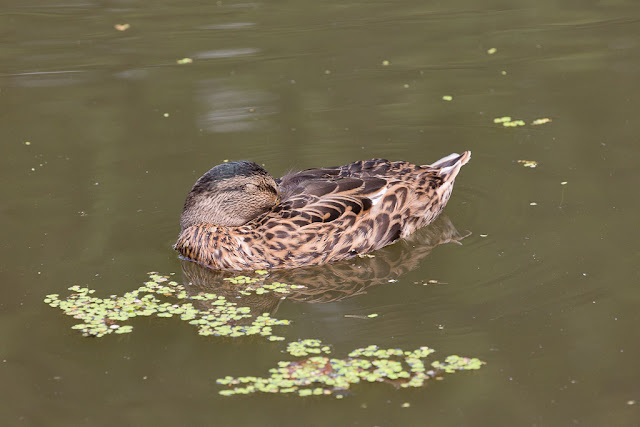 I had to get out of the house yesterday. We're in for a rainy weekend, so I knew there wouldn't be a whole lot of activity around here -- and I feel like I've been sitting around forever, given our recent heat wave and my travels to equally hot Florida. I needed a good, long walk.

So yesterday I did a 5.5-mile leg of the Capital Ring, from Greenford to South Kenton. It's been more than a month since I last walked part of the Ring, so I was long overdue.

The walk started at Greenford tube station and soon joined up with the Grand Union Canal, where I saw lots of birds, including some peacefully sleeping ducks. 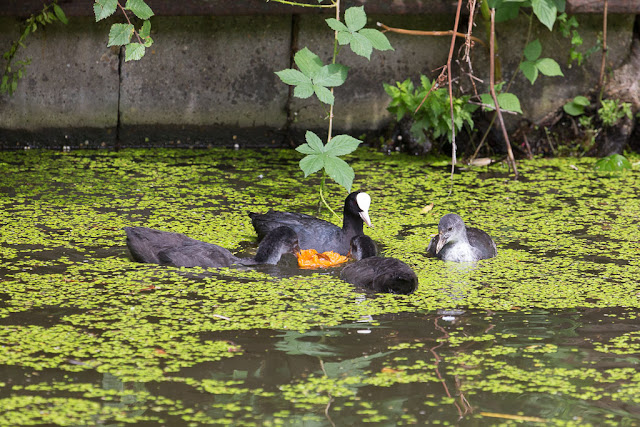 I saw a coot diving for something bright orange and gulping it down. Initially I was alarmed, thinking the bird was eating plastic -- but then I realized it was a peach. (God only knows why a peach was in the canal.) Some chicks soon joined in.

I also saw a stately blue heron and a pair of moorhens with tiny, tiny babies. I wonder if it was their second brood of the season. 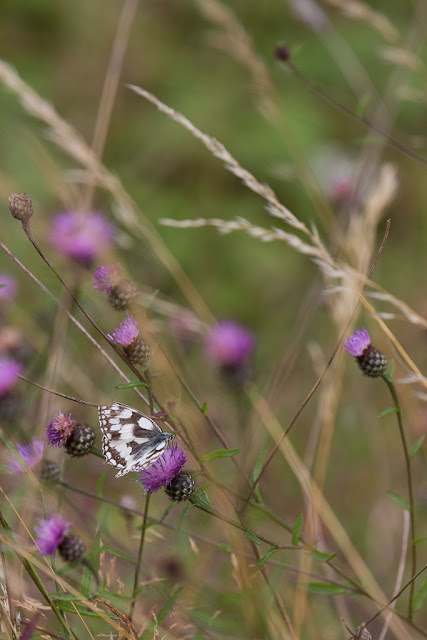 At Horsenden Hill I walked through a historic publicly owned farm, with a farmhouse dating from the 19th century and a nature trail based on the Gruffalo, a fictional character from a much-loved British children's book. (I'd never heard of the Gruffalo before I moved to England, but it's a huge thing here.)

I didn't find the Gruffalo, but I did find lots of interesting wildlife including marble white butterflies (above). 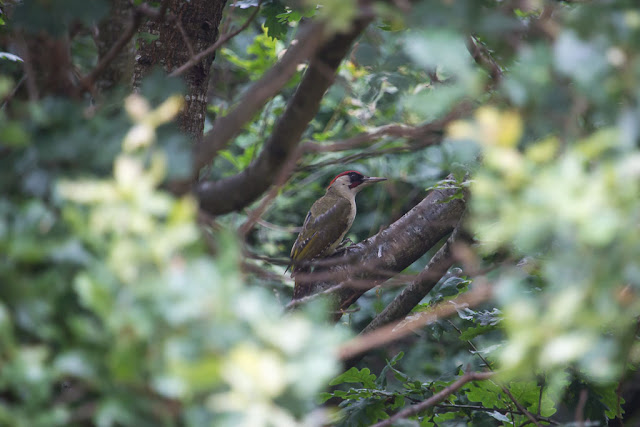 Atop nearby Horsenden Hill, which is about 275 feet high and has views over much of West London, I saw a pair of green woodpeckers flitting among the trees. The shot above was the best I could get. Green woodpeckers tend to be shy and hard to photograph, at least in my experience.

Not long afterwards, a fox ran across the path directly in front of me! 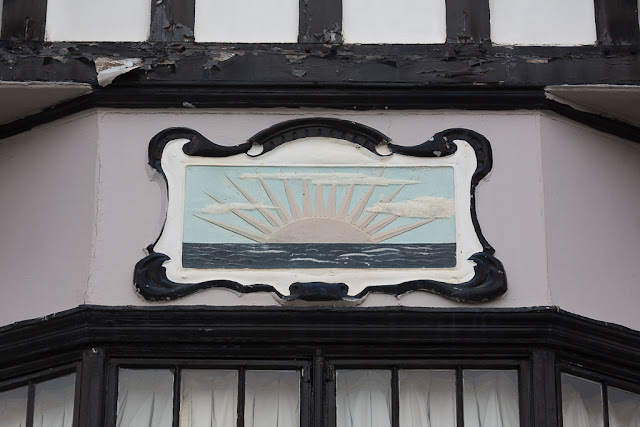 I stopped in the community of Sudbury Hill for lunch -- a quick sandwich and coffee from a takeaway shop. There was a large hotel and pub nearby called The Rising Sun. The building looks like it needs a spruce-up, but I liked the painted relief on the exterior wall. 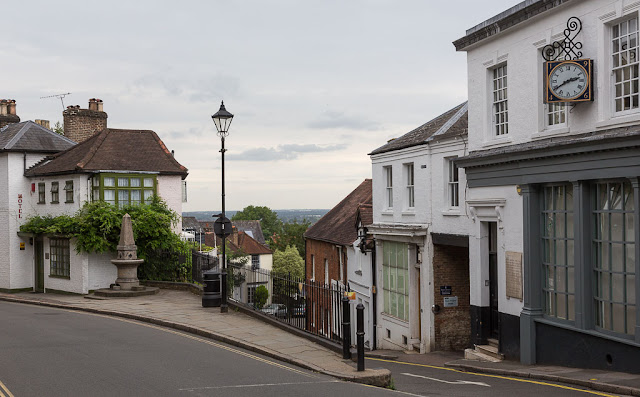 From there I walked into Harrow-on-the-Hill, the location of the famous Harrow boys' school. It's a charming village with sloping streets, quaint buildings and shops that stock suits and straw boater hats and whatever else a life at Harrow demands. 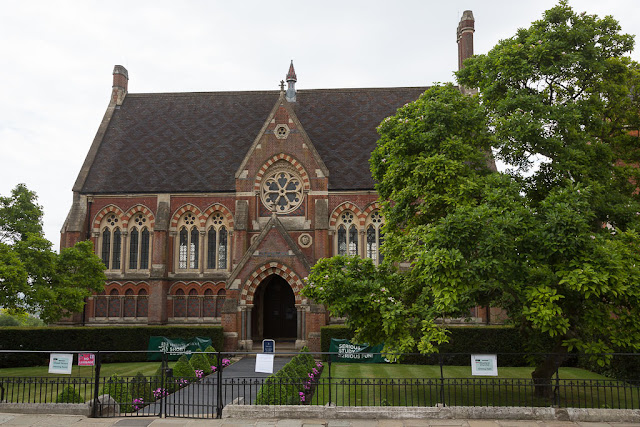 Here's the school chapel. A lot of the buildings are ornate structures like this, with Gothic decorative elements. 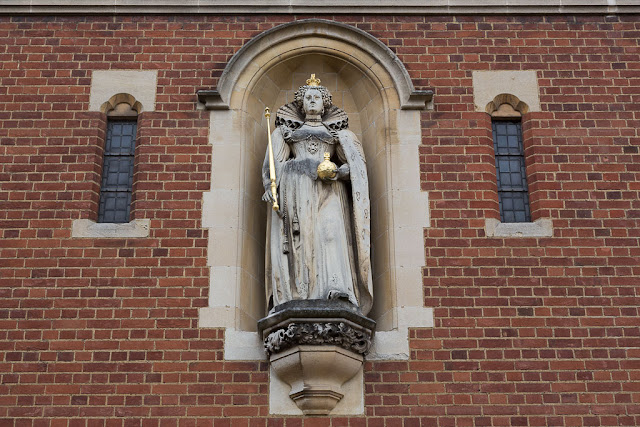 Harrow school was founded in 1572 under a royal charter from Queen Elizabeth I, which is why she's featured prominently on the "new" speech room (which is more than 100 years old!). 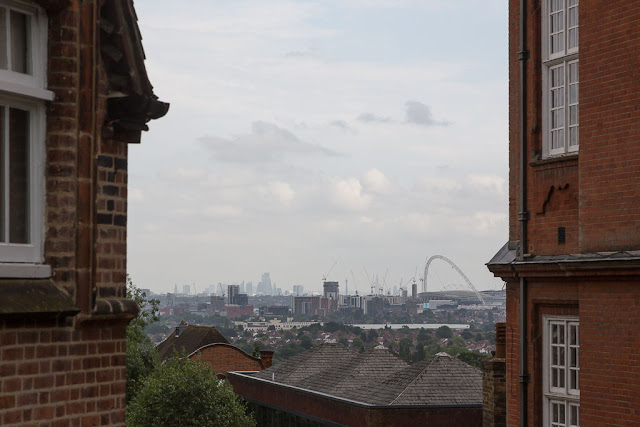 Harrow has great views over the city -- you can see Wembley Stadium on the right, and all of London stretched out behind it. (This is looking in a southeasterly direction.)

From there I walked across the school sports fields and past a nearby golf course. ("Stay close to the high chain-link fence and keep it on your right-hand side. It gives some protection from stray golf balls," my map helpfully informed me.)

At South Kenton station, I got on the tube for home, having avoided being clobbered by errant sports equipment. But I didn't want to go all the way into town in order to switch tube lines to get to West Hampstead -- so at the next stop, North Wembley, I had the bright idea to get off and walk to Wembley Park, which is on the same line as West Hampstead. It wound up being more of a walk than I'd intended, but that was OK  -- I got to see some of the always-interesting neighborhoods around Wembley.

And now at least I've had some exercise!
Posted by Steve Reed at 6:43 AM

Wow, I love your photos and descriptions, so much more variety than the neon and asphalt in my locale though we do have the ducks you discovered. After days of rain, I'm a bit antsy myself.

Did you purchase a straw boater in Harrow? I think that this stylish traditional hat would suit you and protect the top of your head from sunburn. Besides, it's cool to make a fashion statement.

As always with your walks this was a great read.

I am so envious of your and Mr. P.'s walks. So incredibly scenic.
What WAS a peach doing in the water?

Good eye. Many people walk by things and never notice them.

I love your walks. so many great little details and photos.

That was such an enjoyable walk. Thank you for sharing it with us.

Now I have to add Harrow-on-the-Hill to my list of places to visit next time I'm in London. It looks like a place I'd love to explore. Your walk sounds wonderful and you got to see so many interesting things. It's supposed to hit 110 here today so unfortunately, I won't be walking anywhere. Next weekend I'll be in California where I can walk on the beach. I can't wait.

We have been away for a week on a river cruise on the River Severn, so just been catching up on your posts for the week....some great photos. We saw some baby moorhens on the river in Upton on Severn . The holiday would have been nicer with cooler temperatures! The worst thing was having to get on a bus on Wednesday that had no air con and no opening windows......over half an hour of hell!! We were going to a steam railway..(.Severn Valley) and of course that didn't have AC either, but at least the ( very small) windows were open, so not so claustrophobic !

I can't believe that duck didn't even wake up! Great shots here. And Yay for not getting "clobbered by errant sports equipment" - LOL!

Oh wow what a wonderful walk. I miss walking. I use to be able to walk every day for 5 miles and more. I loved the very early mornings in Nevada. I lived in the desert at the foot hills and I would take off with my dog every morning and we would walk and walk and walk. We would get to our 21/2 mile mark and turn around much to my dog Bandit's disapproval but we turned around and I would go home, hydrate, shower and go to work where I was on my feet 10 hours a day. I MISS IT. I am not able to walk anymore like that. A trip to the supermarket makes me ache for hours now.

London is an awesome city from what my online friends say that live there. I totally love hearing the stories and such. I loved the church. Wow...
I am happy you had your exercise. Have a great weekend... Beth Reed

Nice tour. I think if you ever tire of being a librarian, you could make a living as a tour guide.