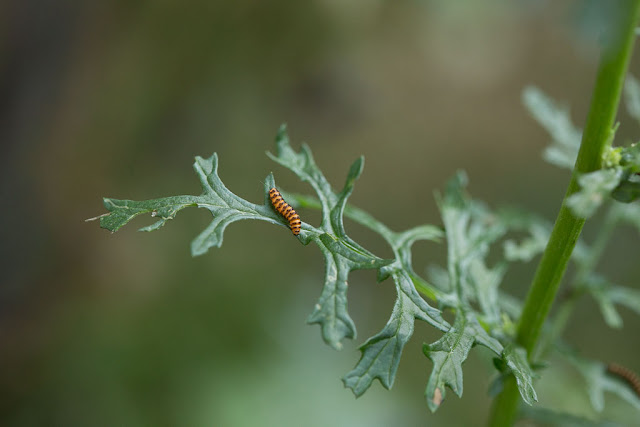 For several years, we've been allowing wild ragwort to grow in our garden over the summer. The reason is that it's the food source for the cinnabar moth caterpillar, and cinnabar moths are apparently a species in decline in the UK. (I've personally never seen an adult cinnabar moth, though I have occasionally seen their caterpillars in parks and wild areas.)

We've never found any in our garden -- until yesterday! I was looking at some of our ragwort and saw these little orange critters crawling around. They're tiny compared to the caterpillars I've seen in the wild, but I'm pretty sure they're cinnabar moths. 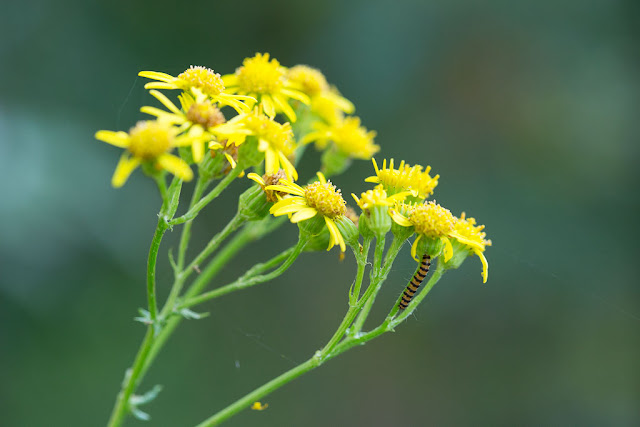 I was so excited to see this! I put a wire plant support next to (but not touching) the ragwort so the dog won't brush against it and dislodge the caterpillars. Hopefully they'll live a few weeks and then pupate and become moths. Apparently birds don't like to eat them because they absorb toxins from the ragwort, but like all insects the vast majority still die for one reason or another before ever reaching adulthood. My fingers are crossed! 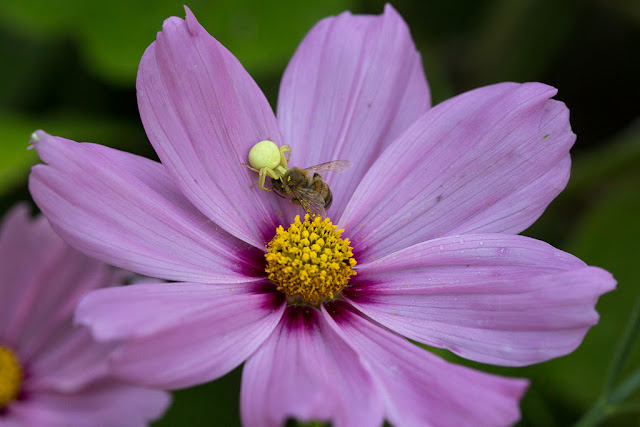 I also found this crab spider on our cosmos, feasting on a bee. These pale spiders lurk beneath flowers and grab unsuspecting insects that are drawn to the blossoms. It's hard to be a bug!

I had a very quiet day yesterday. I mostly sat in the garden and got caught up on magazines. I don't know about you, but I find little more oppressive than a stack of unread magazines. Books don't affect me the same way -- a book can sit on my shelves for years without being read, as long as I plan to get around to it one day. But I gotta stay on top of magazines, I suppose because their content is usually more timely.

Dave left yesterday morning for Heathrow, bound for the U.S. He's going to visit his parents in Michigan and also attend Drum Corps finals in Indianapolis. He'll be gone about two weeks. So it's just me and Olga holding down the fort. I have a few small trips I hope to make in and around London, and then I'll be going back to work around the time Dave comes back. The summer always passes too quickly.
Posted by Steve Reed at 6:58 AM

Having been stung by a tropical caterpillar, I am not a fan. I hope you and Olg a enjoy the last days of your summer break and safe travels to Dave..

Dressed in black and amber stripes, the cinnabar moth caterpillars must be Hull City supporters so I like them! And now I have just seen images of cinnabar moths courtesy of Google, I realise that I saw several of them in real life when walking in Derbyshire last week.

You are right about the toxins in Ragwort, it can damage a horses liver and even kill them, that's why you usually will not see this plant in a field containing horses.
Let's hope those little caterpillars survive and flourish.
Briony
x

I love your insects and butterfly pictures. We have seen a total of three butterflies in the garden this year, after the abundance of last summer, this is such a scary thing. We have a huge buddleia and lots of flowering sweet william but no luck.

I will now begrudgingly tolerate the growing of wild ragwort in your garden if it assists the life cycle of the cinnibar moth.
While Dave is over in Michigan visiting his folks I'm sure he'll get the lowdown on potato harvesting from that expert branch of the family...
Alphie

books are a one time thing, magazines multiply, insisting on coming every month. we currently don't have any magazine subscriptions. Like Sabine I have seen almost no butterflies this year.

I can't believe it's almost time to go back to work but, I just heard a co-worker here talk about her kids going back to school next week. Wow, that seems early. I love those caterpillar photos. I hope those tiny critters survive.

I can't believe how quickly the summer is going! I've got to start preparing lesson plans for my students and help my sons to go off to their respective colleges. My son Henry will be spending the semester in Florence, so I'm hoping to get to visit him sometime in October. I will also, hopefully, be staying for some part of the trip in London with an old friend. Maybe we can finally meet?

Love learning about the cinnabar moths. It will be so cool if you get to see adults there. I was reading today about the hot weather there again. Hope you and Olga stay cool.

Love Drum Corps competition. Have seen several.
The people who are dedicated to it really work hard.
Can't help but wonder why they always have the finals during the heat of summer.
It can get brutal out there with the heat, humidity and fancy uniforms/costumes.

I had to let go of all of our magazine subscriptions - I decided to not let them be the boss of me. It was ridiculous how guilty I felt when I didn't read every word.

We no longer get magazines either. They just kept coming and coming and we couldn't keep up! lol

Safe travels to Dave. I keep forgetting how short the summer holiday is for you folks. Here the schools closed at the end of June and won't be open again until early September. But we don't have the longer breaks you have, either. I guess it evens out.

Do you think those caterpillars might be juveniles and they may get larger before they metamorphize? or metamorphose? or whatever the dang word is :)

I cut most of my magazines down to just a few. I read my Readers Digest from cover to cover tho and Country Woman and Taste of Home but that is it.

I really hope that the caterpillars make it.

I also hope Dave has a safe flight to and from Michigan. Summer is very long and hot for me. I am wishing for Autumn. Beth