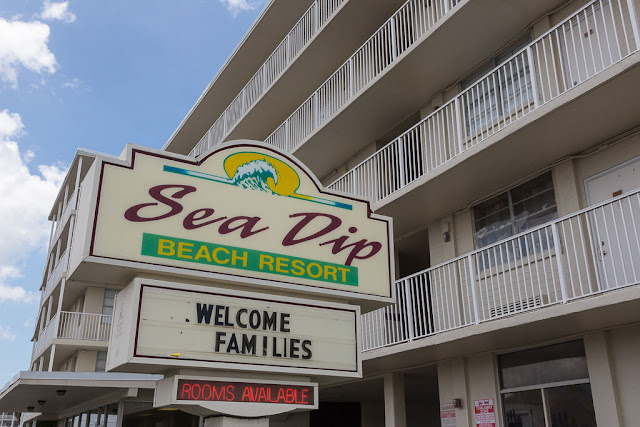 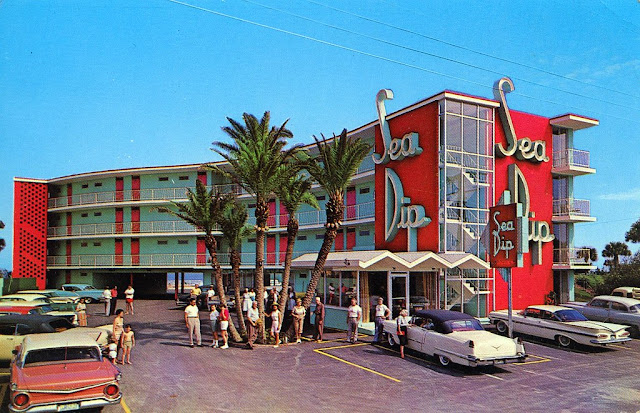 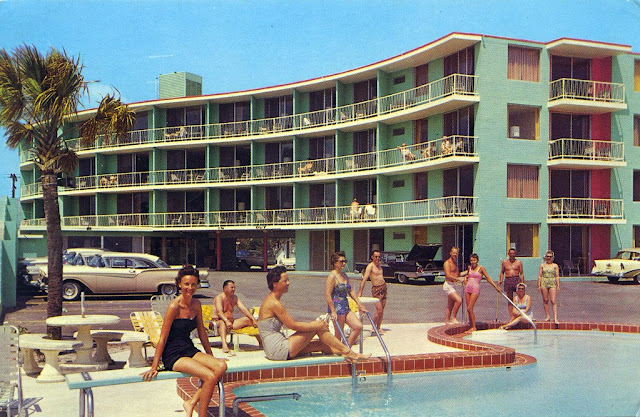 You've got more money than sense Steve - overtipping waitresses! You crazy fool but I love the sequence of "Sea Dip" pictures and how it has changed over the years. If the building could speak it would have so many fascinating stories to tell. Say "Happy Birthday" to your mama for me - from a Yorkshire lunatic.

My parents retired to that locale. I love the colors on the Sea Dip postcard. I wish things were not so bland today. Happy Birthday, Mrs. Reed.

Beige. Tan.
Yuck.
I remember when Florida wasn't afraid of to be different. In a good way. I miss that so much.
I also remember when the word "dip" meant exactly what you said.
"What a dip!"

It's not just hotels. In the olden days, I remember when the hi way was techno-colored, and all the cars were painted in bright, happy, vivid, optimistic colors -- cherry red, lemon yellow, and, my favorite, "Acapulco Blue". Now, all you get is beige, beige, light beige, darker beige, golden biege, and beige.

Happy birthday to your mom! You're such a good son...

I love the old Sea Dip too. But all I can think of is crab dip & now I am STARVING. Ha!

I love that old hotel postcard and photos. What colors. Happy birthday to your mom. Enjoy the journey and the celebration!

Happy Birthday to your mother!
That first post card of the hotel is wonderful. That sign is fantastic. I remember Florida being a very colorful place back in 70's and 80's.

I've only been to Florida once and that was to Orlando and Disneyworld with the kids. it's a shame that we've lost the happiness and optimism of the 50s with it's bright colors. now it's all drab.

I wish the Sea Dip was still brightly colored, it looked great. I would also like to wish your mother a Happy Birthday! But I imagine just having you there with her will be the greatest gift of all.

Such a perfect reason to be in Florida during July, birthday with Mom!
Happy Birthday to her.

I do love seeing the before and after photos of how things change. I wish the buildings were more colorful and happy and alive like in these postcards, so much better than they are nowadays! The old signage is awesome! Why do things have to be so bland now? Have a nice time, and Happy birthday to your mom!

Yes, the Sea Dip has definitely expanded. I wonder if that structure on top toward the rear is now a rooftop lounge/restaurant.

Nice comparison of then and now.

Ever notice how EVERYBODY from old pictures (not postcards necessarily) could have been models? They are all a healthy weight, and dress like they care . . .

I love seeing the cars in those old postcards! A very happy birthday to your Mom. How nice you can be there with her. My Mom's 88th birthday is on the 21st.

LOVE the old photos of the Sea Dip ~ I really miss old Florida. This year I’m celebrating 40 years of living in St. Augustine and just thought I’d mention...if you and your mother and brother might be interested in an afternoon excursion, I highly recommend the St. Augustine Scenic Cruise ~ I call it the painless way to learn a bit about our historic town! It’s a double decker sightseeing boat that’s been in the same family for several generations and it’s a wonderful cruise around our bayfront that lasts a little over an hour. The photo ops are amazing and you often see dolphiins. Wine & beer available and it’s absolutely delightful, especially just before sunset. I think the last cruise leaves around 6:30, so it’s way cooler than the heat of the day. Happy Birthday to your 82 years young mom!!!

Thanks for the comments and birthday wishes, everybody! Isn't the old Sea Dip incredible? If it were still intact, and looking like that, it would be the hottest retro place on the beach. They could probably charge double what they're getting now.

Lulumarie, thanks for the tips re. St. Augustine! I'll let my brother know and if we head back down that way (we surely will one of these days) I'll follow up on that!

By the way, sorry I'm slacking on responding to comments and keeping up with other blogs. It's hard when I'm traveling! I promise I'll be better when I get back home!

The Sea Dip used to be a very groovy place! It's so very toned down now.