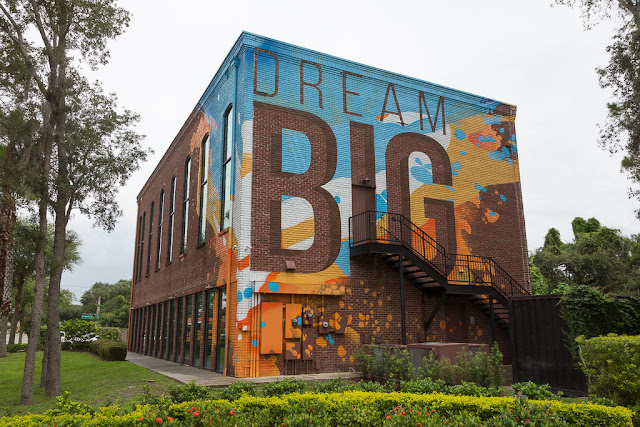 I have already entered that crazy travel/vacation time-warp, in which events seem weirdly expanded and also compressed. It seems like days ago that I wrote my last post! That's partly because yesterday was so busy.

I was like the walking dead for the first part of the morning, but around lunchtime I began to feel better. I couldn't seem to rouse my stepsister or anyone else (they probably felt just as bad as I did), so for lunch I made a solo trip to a Chinese restaurant that Dave and I frequented when we were here in December. I was craving broccoli and tofu in brown sauce. I'm not sure why crunchy broccoli and salty sauce seemed so necessary as hangover food, but it was calling my name.

Afterwards I drove into Tampa and visited blog pal E, who is an old college friend of mine. (She does in fact have a name, but I am respecting her nom-de-plume.) E has been going through some drama lately with her condominium association, which you know if you read her blog, as well as travails with a non-functioning computer. 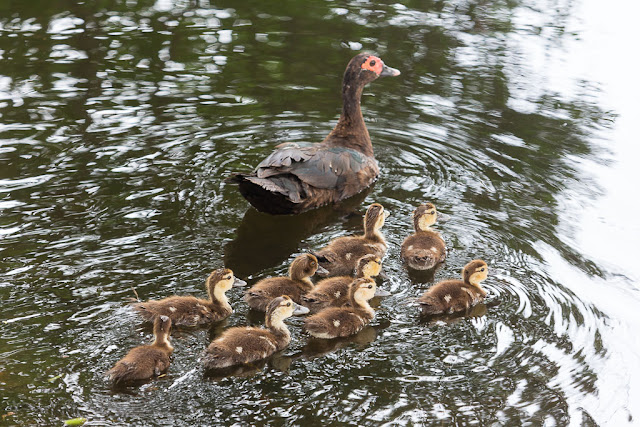 I walked around E's condo complex and outwardly it seems so placid and pristine, with tropical landscaping and lush grass. I met this family of Muscovy ducks -- I think it's so cute that one of the ducklings has a brown face while the others are all yellow. Funny how genes work. Or maybe that's a gender thing? I know nothing about ducks.

Anyway, it was good to catch up with her -- for one thing, she's a trained librarian, and she has inspired me to consider going back to school to get some true library credentials. I've resisted that idea because of the effort and expense, but frankly I do need some new challenges and the school where I work would help pay for it. So I'll think about that. I also met E's confident-but-chill orange tabby cat Lukas. 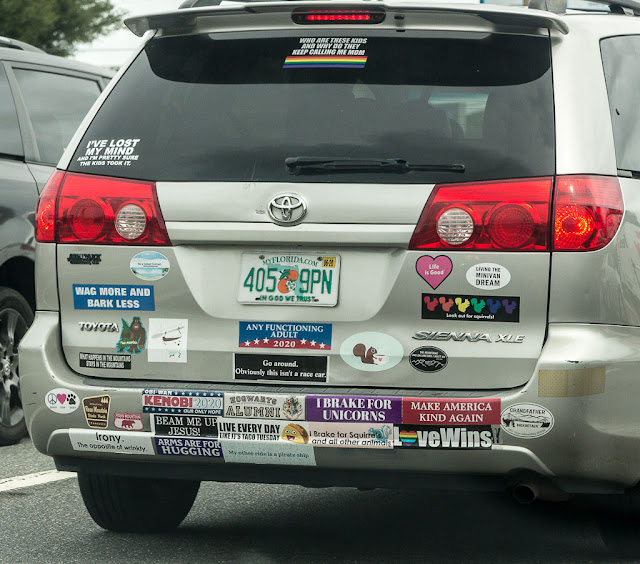 Back in the car, I encountered this van on my way down to South Tampa. I don't know if you can read all those bumper stickers, but the driver's heart is in the right place. I wanted to leap out of the car at a stoplight and give them a hug.

In late afternoon I met my friend Sue -- also from college -- and we had a few drinks (hair of the dog!) and then dinner at yet another swanky, trendy restaurant. It blows my mind how hip Tampa is these days. When I grew up here, there were a few nice old-school restaurants like the Columbia or Malio's or Bern's, but mid-range dining mostly meant Red Lobster and other chains. (At least to my family.) It's so great to see how interesting things have become.

Good Lord. I'm sitting in my stepmother's dark living room and some animal, seemingly about two feet away from me, just started making the craziest, Jurassic-Park type chirping and croaking noises. I'm sure it was just a frog outside, but it sounded gigantic. Florida!

(Top photo: An inspiring building near my stepmother's house in North Tampa. I have no idea what's inside!)
Posted by Steve Reed at 11:42 AM

"Make America Kind Again" is a laudable bumper sticker - especially with what has been happening in the southern border detention centres.

"Any functioning adult", I'd like to give them a hug too. Usually when I see a car with lots of stickers, they are of the "other" kind.
I hope the other ducks aren't making fun of the one with the brown face. I love that building.

a busy trip so far.

Wow! Very busy for a hangover day! I've seen that "any functioning adult" bumper sticker, too, and have the same feeling as you and Sharon.

Did you see that Gatwick shut down yesterday? There was a problem with the computers used by the air traffic controllers, so no planes could land or take off. Your departure timing was fortuitous.

I love all the bumper stickers on that car! I couldn't have any of the kid ones, or the one about going around (because it's not a race car) - because I have no kids & I drive like a demon. But the rest would look great on my car :)

And now I'm in the mood for broccoli. And that's not something I say every day!

Lovely that you got together with e and met her Lukas :) And got inspired to further education.

Love those ducklings - I've never seen brown ones before. Come to think of it, I haven't seen many ducklings before, period.

Those bumper stickers! They are awesome.

The bumper stickers are awesome! "Any functioning adult" is my favorite, too.

The ducklings are darling! Enjoy your Florida adventures. :)

The building is beautiful. I just love painted buildings that are well done like that. Not so fond of those that don't seem well thought out or that don't integrate into the landscape. The ducklings are adorable. Are you expected to get bad weather there from the hurricane?

I love the bumper stickers! Thanks for putting Lukas in your post. He sends greetings and thanks again for the wonderful visit!

You not only had gradual recovery but did a lot in that day. Have fun in Florida.

You had a very busy two days, what with jet lag AND over-indulgence. And then more of the same the next day! LOL I have never seen a car with that many bumper stickers attached. Where I live in Australia, any bumper stickers are rare. But I loved them all - at least those that I could read. And like others above, I really liked that painted building. I have only been to Florida once in my life, and that was in 1974, so I am enjoying the pictures and description of the place.

I like " Irony the opposite of wrinkly". How many accidents do bumper stickers cause? People reading them not looking where they are going! Quite glad it isn't a thing here!

Great mural! And it's always fascinating to me to contemplate the merging of real and virtual worlds. Of course e was part of your real world, first.

I love those bumper stickers!