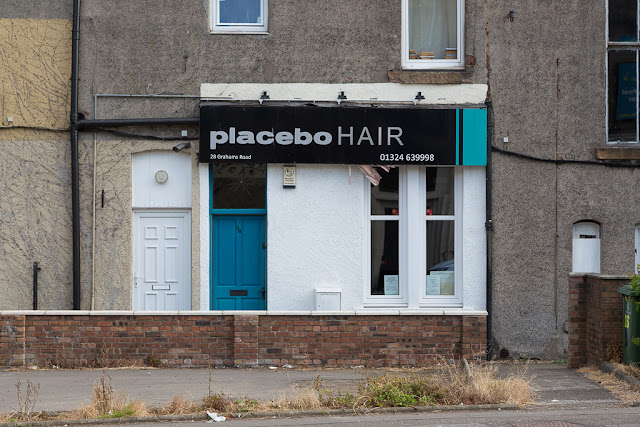 Dave and I were up early-ish yesterday morning to catch our 9:30 train from Falkirk back to Edinburgh and then on to London. We abandoned all frugality and took a taxi from the hotel to the station. Our driver's name was Malcolm McDonald. So Scottish!

We came across this hair salon near the station. "You ask for a haircut, and you get nothing," Dave said.

We didn't have assigned seats on the 10:30 train from Edinburgh to London. Over the past few days I'd called both the train service provider and the online company where I bought the tickets, and we spoke to a ticket agent at the station, but no one could get us seats. It turned out to be a packed train. Dave and I were dreading having to stand or slump in the aisles for four hours, but a helpful conductor suggested we catch the noon train instead, which would be much more open. So we did that, and there were initially plenty of places to sit -- and then someone who had reserved seats from Newcastle to London never boarded, so we grabbed those seats and were comfortable the whole way. 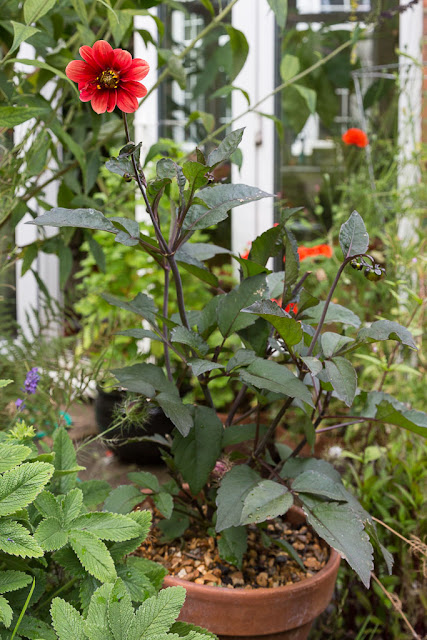 We came home to a slightly wilted garden, but Dave watered everything and it has all bounced back. Apparently it's been relentlessly sunny in London this week. On the bright side, one of the dahlias I grew from seed has bloomed, and all three plants have lots of buds -- so I feel like that was a successful project. It's a variety called "Bishop's Children." 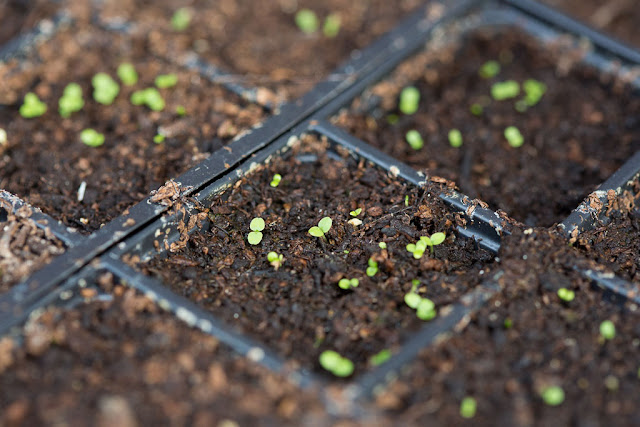 The foxglove seeds I scattered in trays last week have also sprouted. I can see I'm eventually going to have to do some thinning, which I hate to do. Foxglove seeds are so impossibly tiny there was just no way to plant them more carefully.


Olga got dropped off around 6:30 p.m. -- she bounded into the house like she owns the place, which she does, more or less. Her dog-sitter, Simone, sent us this video yesterday morning, to show us what Olga was up to in our absence. Looks like Dog Heaven to me.

I got the laundry going. I made a proper martini. We watched "Law & Order" and "A View to a Kill," which has to be the worst James Bond movie ever made. So, basically, for the next few days at least -- until I fly to Florida on Tuesday -- we're back to normal around here.
Posted by Steve Reed at 6:09 AM

Was the McTaxi driver wearing a kilt? I wonder why the McDonalds burger chain don't have their employees wearing kilts - in the McDonald tartan of course. It would be a great selling point. As for the dog water party - they do seem to be having fun - no barking or fighting - just a canine love-in.

I'd guess that the Bishops Children was bred from the Bishop of Llandaf...a lovely coloured flower

You were lucky on the train!

The dogs all look very happy.

What a nice little dog gathering! They are much better behaved than a lot of children.
Glad you're home to your dog, your washing machine, your martini shaker, your garden, your own bed!

Fabulous Photos And Loved The Pineapple Post As Well. Safe Travels Back To The States!!

Travelling can have it's challenges. After I've been away the first thing I look at when I get home is the garden. It's always surprising how much it has grown.

Welcome home! Nice to see that doggie gathering video and to know the garden perked up after the watering.

Agreed....dog heaven it is! Glad you made it back home and had a seat on the train. Standing for 4 hours would be down right painful!

The all look so happy together don't they? Our Daughter takes her dog to a dog place called 'Little Bones' especially for smaller dogs, he can't wait to get there and drags her up the drive, lol
I've stood on trains from London to Brighton before now and that's just 1 hour, good job you found seats for your journey.
Briony
x

I can't imagine standing on a train for four bleepin' hours! Glad you got seats.

Love the Placebo haircut place - and Dave's definition. And like Ms Moon said, those dogs are all so well-behaved! It looked like they were so enjoying getting cooled off.

I need to learn how to make a martini, vodka for me though. and it looks like dog heaven to me.

Glad you made it home safely. Those kinds of splurges are the BEST - I love when we do something extravagant like that at the end of a vacation. That looks like Bug heaven too!

So far it seems like you're having a wonderful summer! Keep it up!