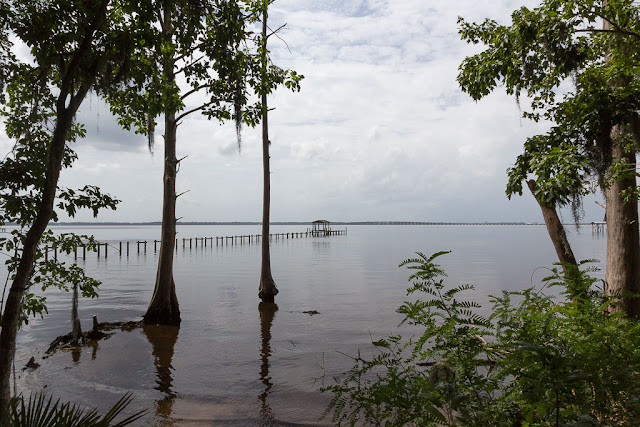 More errands with my brother's family yesterday -- a trip to the local branch library, a stop at the optician to get my older niece Jane's glasses repaired. The library was airy, modern and pretty impressive. I thought it was very well-stocked. They were having a sale of donated books to raise money, but by the time we got there I think things had been picked over -- lots of James Patterson, Clive Cussler and Tom Clancy were left languishing. I have enough to read, so I didn't bother!

Afterwards we went to a little restaurant called The Local for lunch. I had a big salad with chicken on it. I'm always hungry for vegetables when I travel -- I don't know why that is. Kate was horrified that I was eating beets.

You know how I make those GoPro dog-cam videos in London, with Olga wearing the camera? Well, I brought my GoPro camera to Jacksonville so we could make a video featuring Queens, my brother's dog. I thought it would be a fun project for my nieces. It turns out Jane knows more about iMovie than I do (of course) so we had fun yesterday morning filming 40 minutes of video and then paring it down. Unfortunately Queens was a somewhat reluctant participant. We'd put the GoPro harness on her and she'd just stand there -- she didn't like to move with it on her back.

Finally, by putting the leash on her, we were able to motivate her to explore the neighborhood on a walk. It didn't make for thrilling video -- Queens is way too well-behaved. Apparently the GoPro works most effectively when attached to a crazy, squirrel-chasing, Kong-loving staffy! 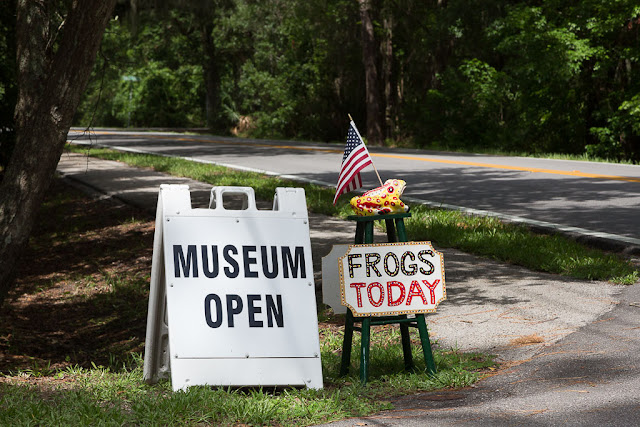 As you may remember, I've written before about the colorful concrete frogs that are a feature of this part of Jacksonville. They appear on bridges, tree stumps and other areas beside the roads and in people's yards, and they're created by the "frog man of Mandarin," a sort of reluctant local celebrity. I've always liked the frogs -- fun creations that hopefully raise awareness of local ecology.

Well, as I was driving past Walter Jones Historical Park yesterday, I saw this sign out front. I stopped and sure enough, the frogs were for sale. Woo hoo! I chatted with the frog man and picked out a green-and-purple one for my nieces, with the money going toward the Mandarin historical museum (located at the park). I gave it to them last night and everyone seemed tickled with it. If you live in Mandarin, you have to have a frog!

(Top photo: The St. Johns riverfront at Walter Jones.)
Posted by Steve Reed at 11:06 AM

a day in the life with the family. I recently bought a frog at an estate sale. it sits on a concrete block by the back door. as if all the real frogs and toads aren't enough.

Family life. Not always that exciting but generally quite amusing.

Sounds like a fun day and made even more so with FROGS!

Sounds like you have a nice relationship with your nieces. When they look at that green and purple frog in the future they will think of you.

What a fun story about trying to get the dog to cooperate. It sounds exactly like what my dogs would have done when I had dogs years ago. I can just picture them sitting there with the camera attached and just looking at me with an expression that said "now what".
I love that waterfront photo!

You'd better never do anything so bad that you'd be thrown in prison. You might become known as The Frogman of Alcatraz!

How do u feel being home ?

I love that frog. Will there be a pic of the one you bought for your nieces??

Looking forward to the GoPro movie, if you plan to post it.

I want a frog! Or at least a photo of the one you bought :)