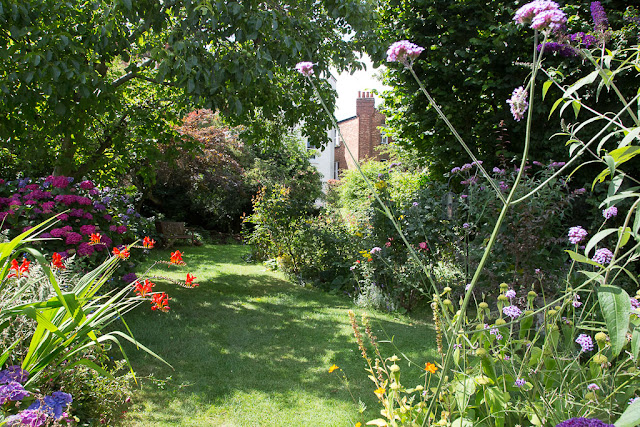 Thanks for the lovely tour of your garden. It is a good job that you have a ground floor flat. Outdoor space like that is good for the soul and that much loved garden is an extension of you... and Dave too. Just lovely.

Happy anniversary!!
Both of your meals sound fabulous.

You have two anniversaries! Your garden looks like it should be in a magazine...Gorgeous!

Your garden is beautiful. What a treasure, to have that kind of space just out the back door.

It's wonderful that you can look back a mere nine years and regard your old life as something almost unrecognizable. In theory, I like change and, in theory, I like to make a clean sweep in my own life every once in a while...but I can look back nine years, and I was doing pretty much what I'm doing today. Except that I was much more naive. So, bravo for taking big chances in the past nine years (including adopting a certain staff).

Don't get me started on where we were as a country (in America) nine years ago. You chose an excellent presidency in which to have your Union Day. Good timing.

gardens don't have to be big.
Happy Anniversary to you both xx

I watched every second and enjoyed it all. What a glory! How fitting that all of this is in bloom for your anniversary! Look at what you and Dave have created with your life together. Congratulations and I wish you many, many more- years and gardens!

Gorgeous flowers! Wow, Steve, your garden is a wonder! :) And Happy Anniversary to you and Dave....and many more!

I watched the whole thing. you have such a variety and yes, isn't the garden wonderful when it's full and lush and it's peak. I may have to try a video of my garden. and happy anniversary.

Happy anniversary. July is a peak time for gardens. Mine is a jungle right now.

Happy anniversary! Your garden is beautiful, a large bouquet of love in bloom.

I can't get over how beautiful your garden is. It is simply gorgeous and the word "lushness" is a perfect description. Please tell me what music you used on the video. I loved it. It was so soothing and was perfect for the video.
Your anniversary dinner sounds fabulous.

I remember you writing about your landlady raising the rent and only giving you an 8 month lease. Is she crazy? Most landlords would love to have tenants that take of their property like you two do. It's lovely.

A great tour of the Steve and Dave Botanical Garden of London. I watched it all. Happy anniversary to you two. The Fran Dreschler gag was hilarious!

I'm surprised to see blackberries in the garden. In Washington they're an invasive weed - on the level of kudzu in the south. Do they spread much?
Your garden is just lovely. You truly are a plant whisperer.

You have a much more extensive garden that I was picturing! Lovely. "Red-leafed mystery bush" - LOL! I love the globe thistle. And your butterfly bushes are huge compared to what mine was, even at its biggest. But I can match or beat your burdock plants, ha ha! I've been ripping out those things around our yard, they grow so big and are a nuisance. Different climates, eh? Thanks for the tour!

Happy Belated Anniversary Steve and Dave!! Your dinner sounds so wonderful and Oh your gardens just blew me away. I confess I had trouble reading and looking at the gorgeous flowers but wow they are absolutely gorgeous.
I have always wanted gardens like that but now I can barely take care of a few potted plants. I cannot get down and weed or plant. So I enjoy from afar now and I will say that your gardens are GOLD!

I remember years ago when I lived in Vegas we went to the Bellagio and walked thru their gardens. It was such a gorgeous exhibit. I have a thing for all flowers and plants but it I have a very soft spot for Foxglove and Holly Hocks and Snap Dragons.. Well truth be told I have a soft spot for them all.

Have an awesome day. It is very hot here today. 106 degrees. I am in Austin Texas so we always have very hot summers. Beth Reed

LOVE the film that you made with the labeling of all that grows there, Job well done! Happy anniversary!

Happy Anniversary to you both. Your garden contains many of my favorites, and I quite envy your ability to get out there and make it happen. My "new" home has two porches where I grow my potted plants and is quite scaled down from my previous gardens. They are such a labor of love, and such a joy to watch them change through the seasons. I don't have the physical energy for one like yours, now, so it is especially wonderful to be able to see this video. Those black berries look yummy!

Continue to enjoy the season while it lasts.

Thanks, everybody, for your comments! Glad you all liked the video!

Yes, Ellen, you should make a garden video!

Red, I would love to see what your garden looks like.

Sharon, the music is "Woods" by pianist George Winston, from his album "Autumn" on the Windham Hill label.

Elizabeth, call our landlord and TELL HER THAT, would you? :)

Allison, the blackberries in our garden aren't a problem, but we keep them in check. In the wild they can go crazy.

Jenny-O, my burdock is still young! I like the fact that the plants are so big, but we'll see how I feel if it becomes problematic.

Beth, Austin is a wonderful town!

Thanks also for the anniversary wishes, everyone. E is right -- we have two anniversaries, because we got civil unioned in July and officially married a few years later in December, after the gay marriage laws changed. We consider the July one our "real" anniversary.