The Pineapple, and Other Curiosities 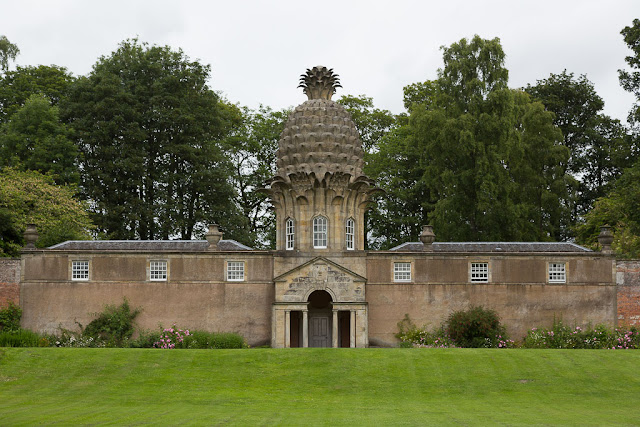 Yes, that is a 260-year-old building with a giant pineapple on the roof.

Don't you LOVE THAT?! Here's a closeup: 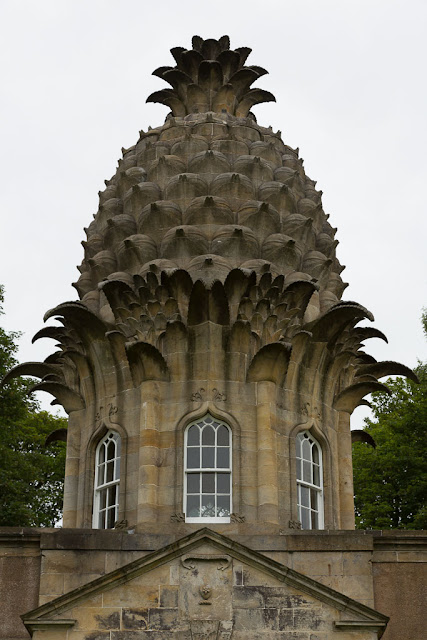 When I heard that The Pineapple, or the Dunmore Pineapple as it's sometimes called, was close to Falkirk, I knew I had to go. I couldn't pass up something that wacky.

So I hopped on a bus yesterday morning -- sans Dave, who decided to stay behind at the hotel for a day of rest -- and rode out to the village of Dunmore, near the Firth of Forth. I walked a bosky path through woods and barley fields until I found myself in a walled garden, surrounded by an orchard, blooming roses and a pond. The Pineapple, which was originally built in 1761 as a summer house for the landowners of this area, presides over the garden. 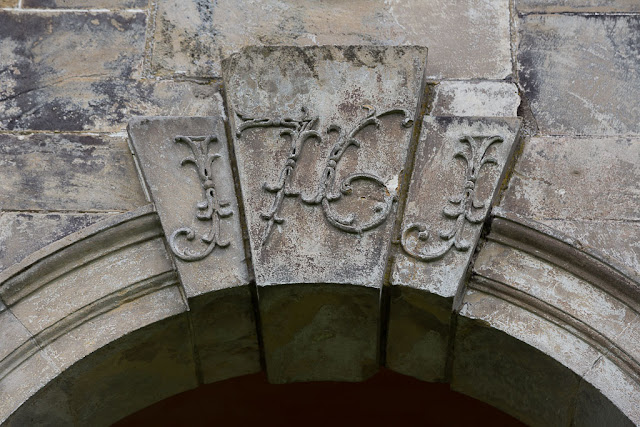 You can apparently rent the Pineapple as a place to stay, but I didn't have the forethought to pull that together. I had to settle for seeing it from the outside. But that was fine!

After looking around a while, enjoying the rustling wind and the birdsong, I took a path leading through the adjacent woods to a dirt road. Google Maps had shown me that this dirt road would circle around again to the main road near the village. 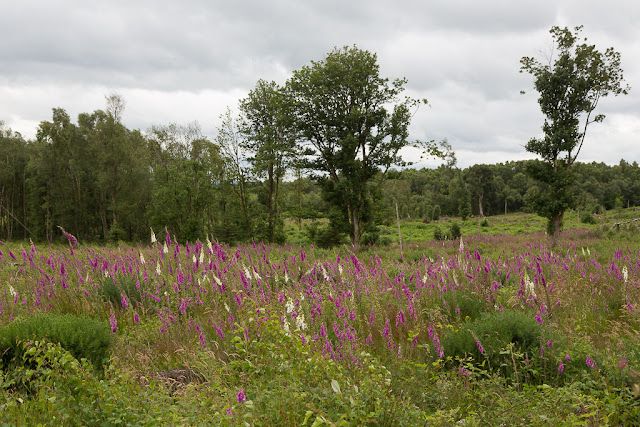 I passed through an area of logged forest (I think) where foxgloves were growing in profusion. I don't think I've ever seen so many foxgloves in one place! 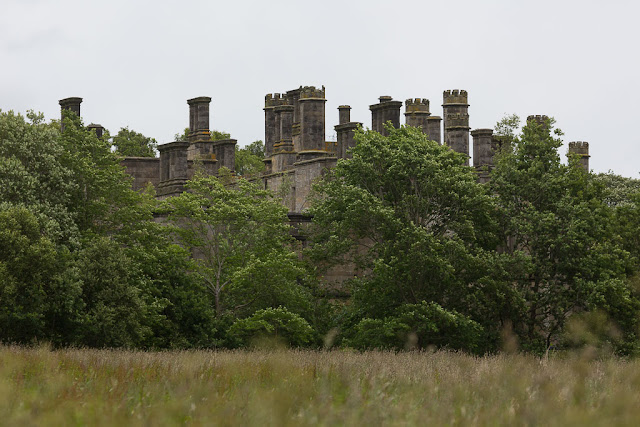 I passed the now-ruined estate of Dunmore Park, once home to the Earls of Dunmore. They were also behind the construction of The Pineapple. But while The Pineapple has rightly been preserved and is now owned by the National Trust of Scotland, the rest of Dunmore Park has sadly fallen into disrepair.

I didn't try to visit the house, which, as you can see, would have entailed hiking across a field of tall grass. Apparently it's not much more than standing walls and chimneys at this point. 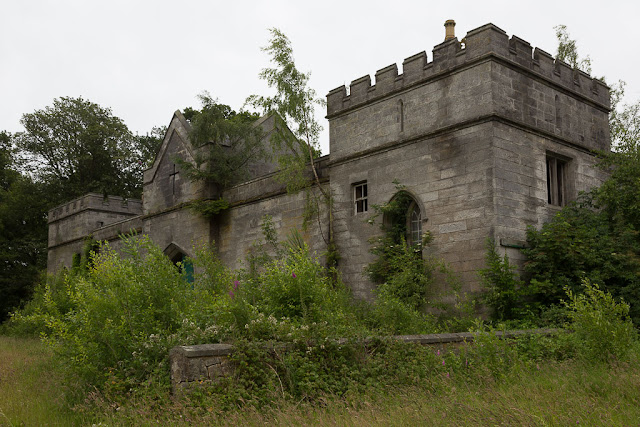 I did look in on the former stables, which are closer to the road... 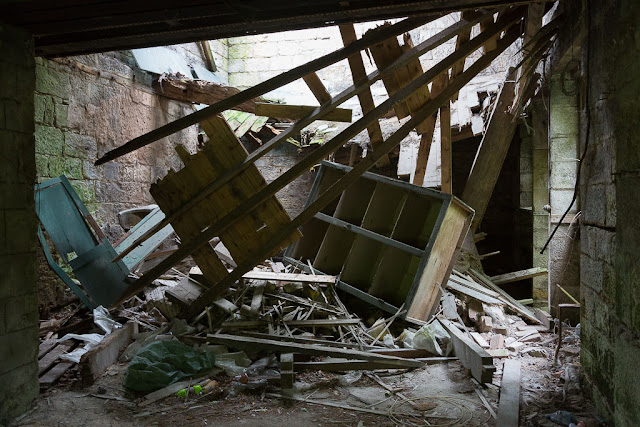 ...but they didn't seem entirely safe, so I didn't go in. 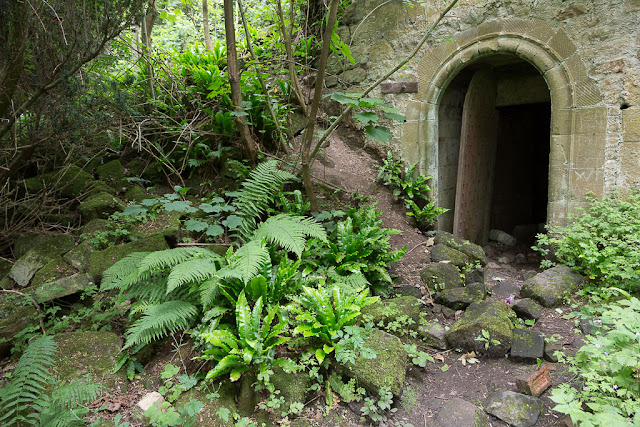 Farther on, I visited the village of Dunmore, with its tidy, manicured village green and Victorian stone houses. It was redeveloped during the 1800s, replacing the earlier shanties of workers who panned for salt in the river.

And I visited Elphinstone Tower (above), an even earlier ruin on the Dunmore Park estate. Apparently it was once used as a mausoleum, but fortunately there are no bodies there now. It's merely a picturesque tower with a stone cornice at the top and some beautiful wild ferns around the open doorway.

I caught the bus back to Falkirk and met Dave for lunch, before taking a photo walk through town. I got back to the hotel about 6 p.m. We decided to stay here for the evening, which meant risking the hotel restaurant again -- but this time I chose more wisely and had a pretty good meal. It's hard to mess up red wine and macaroni and cheese.

Oh, and I must clarify one thing about my "bad martini" stories from the past few days. Some of my commenters suggested I was expecting something unreasonable by ordering a martini in Scotland. But both of the restaurants where I placed those orders had martinis on the menu -- they specifically offered to make me a dry gin martini! It's not like I walked in whistling Yankee Doodle Dandy and demanded something the hapless Scots had never encountered before. I just have to point that out, in my own defense.
Posted by Steve Reed at 6:56 AM

Great photos again.....I love the one with all the chimneys .

Sounds like you had a good day exploring. If I was going to have a massive piece of fruit on our roof, it would not be a pineapple, it would be a banana. With regard to your martini defence: if you didn't walk into the restaurant whistling "Yankee Doodle Dandy" what the hell were you whistling?

..."The Martini Song" by The Canadians?

I wish you had walked in whistling Yankee Doodle Dandy! Ha! They would probably decide you didn't need a drink at all if you had!

I love the pineapple! Although the actual structure itself isn't all that lovely. Looks like you had a great walk.

Isn't the pineapple supposed to be a symbol of hospitality? That building doesn't look very hospitable though.
Okay. So they had martini's on the menu? Well hell, I would have ordered one too.
Macaroni and cheese and red wine. Yum! Wouldn't you just love to attend one of their funereal teas?

I'd like to see the inside of the pineapple building but no windows except those across the top. must be very dark in there. but what a great exploring day with all the ruined buildings. that's a great shot of the mausoleum.

Walking off the beaten path can give you adventures that other people will never have..

That is such an interesting place to visit. Love the walk around the old estate.

Oh, you can mess up macaroni and cheese. Aer Lingus can do it.

Here on the north shore of Long Island there is a legendary Jewish restaurant/deli that has Caesar Salad on its dinner menu. However, as the place is kosher (meat), there is no parmesan cheese on the salad, which is merely a heap of chopped-up romaine lettuce, upon which is littered many bits of cherry tomatoes, and the dressing is green and full of dill. I wanted to bitch about it but my husband asked me to not make a scene, but I think it is immoral and it should be illegal to advertise a "Casaer salad" (or a "martini") when you have no intention of delivering anything remotely akin.

Reminds me, I have a Yelp! review to write.

The pineapple house is something to see! I'm so glad you went there and took photos to share. And, the rest of your walk was also interesting with ruined castles and fields of foxgloves.

I see why you're so slim with all these walks you take, even when you're on vacation!

I don't understand how they can mess up a martini. It's gin and vermouth, right? How hard can it be to put two liquids in a glass? The pineapple is pretty impressive.

Well, that walk was worth the effort- what a splendid building! Comical and splendid...
Pity the rest of the estate has gone back to nature, I bet that there are feral cats living there, or something interesting...ghosts maybe!

I have been watching Outlander of late, so these photos are very evocative for me. Always love exploring with you, Steve!