The Moons on Moon Day 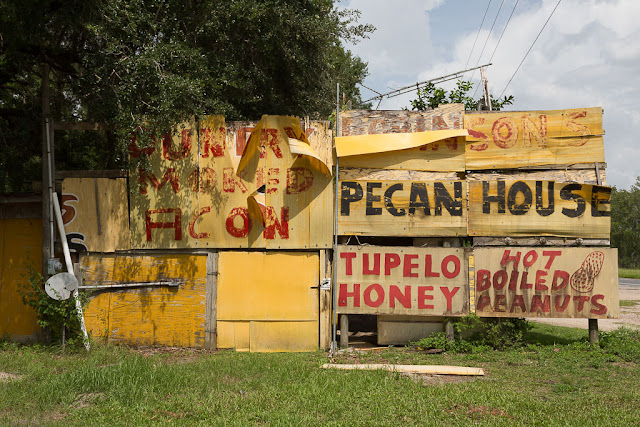 I'm back in Tampa now, having driven halfway across the state width-wise, and then halfway down length-wise, altogether spending something like seven hours in the car. Whew! That's OK, though -- I like some alone time in the car, as I said yesterday, and besides, all that driving was for a good reason.

And that is -- I got to visit esteemed blogger Mary Moon and her clan in Lloyd, outside Tallahassee. On the fiftieth anniversary of the launch of Apollo 11, the mission that carried astronauts to the moon. How coincidental is that?!

If you read Mary's blog you already know this, because she's a much more punctual blogger than I am and she's already posted about it. (And if you don't read Mary's blog, you should!)

I've known Mary for years, and while I met her through blogging, our lives contain many intersections that make me feel as if we've practically grown up together. She and I lived in the same small Central Florida town (although at different times) and we even know some of the same people from there. We share an appreciation of Florida and all its foibles. Now that I live in England, reading her blog helps keep me connected to my roots in the Sunshine State.

My original mission was to meet her for lunch and to visit some thrift stores, since both of us love a good browse in a Goodwill. We gathered the clan at Tan's, an Asian buffet, and Mary's husband Glen, daughter Lily, son Hank, and grandkids Owen, Gibson and Maggie were all in attendance, along with family friend Lauren. I'd met many of them on a previous visit, so it was a chance to catch up (MY GOD, and I know it's a cliche, but kids grow up quickly in just a few years) and I'd post a picture, but as I told Mary, somehow I feel like I'd be trampling her blog territory by showing off pictures of her family!

So I'll show you this instead: 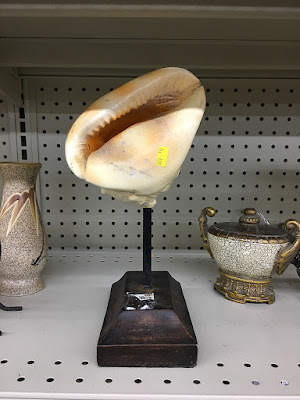 That, my friends, is a shell. On a stick.

We went to a couple of thrift stores after lunch, and couldn't stop marveling at the profusion of unnecessary junk out there. Like a shell. On a stick. And it's not even a real shell -- it's a plastic shell! Why are Chinese factories using the world's resources to churn out completely irrelevant junk like plastic shells on sticks?! 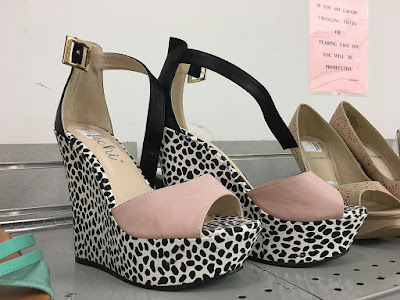 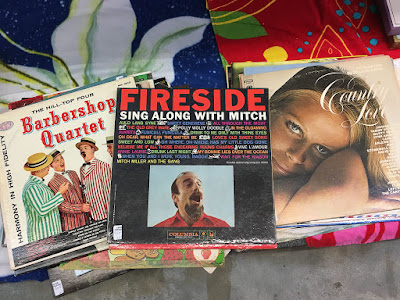 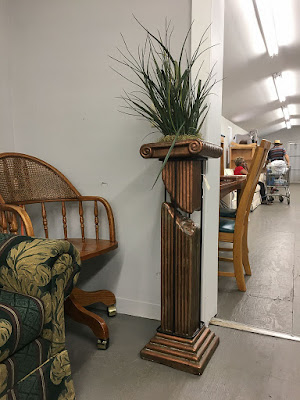 ...and hideous home furnishings. (That's a plastic plant in that artificial broken Greek column. Or is it Roman?)

It wasn't all bad. Mary and I found a couple of good things, too. We found some tables we'd have bought if either of us needed tables, and if I didn't live across the ocean. I also got an excellent shirt, which I'll show you maybe tomorrow, and a questionable shirt with fish all over it that's kind of cool but that I also may never wear. We shall see. 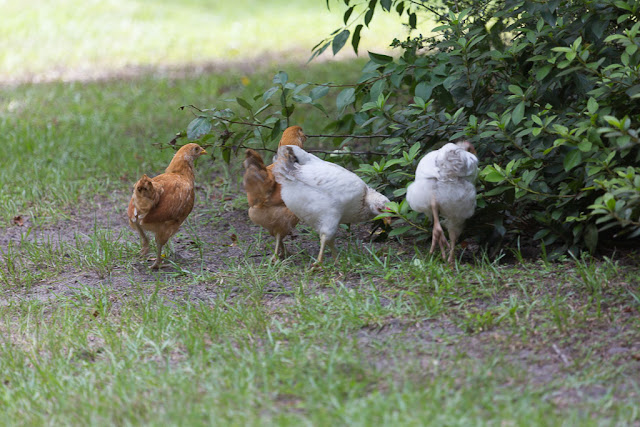 I also had a quick stroll around Mary's homestead, to revisit her chickens (the population has changed quite a bit since I was last there).  Unfortunately all my chicken pictures look like this -- birds fleeing at top speed. They were very suspicious of me and my intentions.

And then I had to jump back in the car and get down to Tampa in time for dinner, since my stepmother very kindly made garbanzo bean soup, which is one of my favorite meals. So I said goodbye to Mary, feeling once again like we didn't have enough time to spend together, and drove south.

On the way, I listened to the Sirius Radio '60s channel, as I said I would. Here's my question about '60s music -- why did anyone ever think "In-A-Gadda-Da-Vita" was a good song?! I listened to the whole thing, possibly for the first time, and I could barely tolerate it. I suspect that's because I didn't have any pot.

And also, have you ever heard Richard Harris' version of "MacArthur Park"? It was a huge hit, but that man cannot sing. Give me Donna Summer any day.

I encountered some stormy weather on the way -- I stopped in Chiefland for a coffee at McDonald's, but they'd just been struck by lightning and the computers were knocked out. The whole place was immobilized, with puzzled employees trying to figure out what to do. I just kept driving and got my coffee in Crystal River.

Glad you and Mary had a chance to catch up with each other. It certainly made her day.

Heh! Memories to cherish! I love the pictures!
We make good shopping pals as we are both amazed at the same weird crap. And agree on the quality stuff! (Maybe I should have bought the Fisher Price record player.)
I sure do appreciate the fact that you made the effort and stopped in Lloyd. My family is ready to adopt you. Or maybe we already have. STEVEREED! Our man from London.

Hot boiled peanuts! Seriously?
Thrift stores are full of awful stuff because people eventually realise the error of their buying ways.
As for the Chinese producing plastic shells, they are astute manufacturers and know that someone, somewhere, will buy this crap. Strange but true.
And the path (road) to the house of a friend is never long.
Alphie

fun day. what could be better than lunch with Mary's clan, thrift stores, and chickens. in a gadda da vida...it was the beat, it was the drums, it was that it was so long at a time when songs were 3 or 4 minutes long. and I hate MacArthurs Park. worst song ever.

What a fun visit. I'm glad that you had the chance to visit Mary and her family and the chickens and I am not sure I could have tolerated listening to all of Gadda Da Vida.... I love listening to the oldies. I am more in the line of Love Potion #9 hee hee.
Have a fantastic time on your trip and I love Garbanzo Bean Soup. Your a lucky man.
Have a super day! Beth Reed

Well that just sounds like a fabulous day. My favorite is the chickens :)

No, Richard Harris could not sing...you had a fun day and a lot of driving. It is amazing the stuff people will buy...I've done enough house clearing to know.

It sounds like you broke up that long drive perfectly with a visit with an old and dear friend. And, you snuck some shopping in to boot! I love all the crazy stuff you photographed in the thrift store. I would have snapped a photo of those shoes too. And, I had totally forgotten about Mitch Miller...and for good reason. I can't wait to see that shirt you bought.

The most perfect day! Thrift shops, charity shops- Value Village are my idea of mindless entertainment with an occasional FIND! Mostly it is catch and release but is a reprieve from reality.
I remember how Richard could not sing but I loved the honesty of it and In a Gadda Da Vida was GREAT, trance music, stoned with flashing lights ...oh yes!
How lucky for you to Go to Mary's house and lunch with the family! So glad you made the drive! Well worth it!

That is SO wonderful. Mary Moon is like a blogger super star for some of us. Really exciting that you got to meet her and her family.

Just think of the conversations you could jump-start at a party if you took home that plastic shell on a stick or that fake plant in fake broken column! It would be worth it just for that :)

Glad you had a good visit. Love the fleeing chickens!

I loved Richard Harris's version of "MacArthur Park". The fact that he wasn't a great singer added to the sense of emotional authenticity. Don't you think it is a very odd song? It has been in my head for decades now. Looking forward to seeing you modelling the two shirts you bought. Remember to pout at the camera!

After reading your tale of the tape I went over to Mary's blog and read her post. It's always fun when blog buddies get together and share their experience with the rest of us. Now I want to see you modeling that new shirt, SteveReed!

I enjoy following you around Florida.

Aww, I was hoping for pictures. I bet Mary wouldn't mind. Sound like a good and exhausting day.