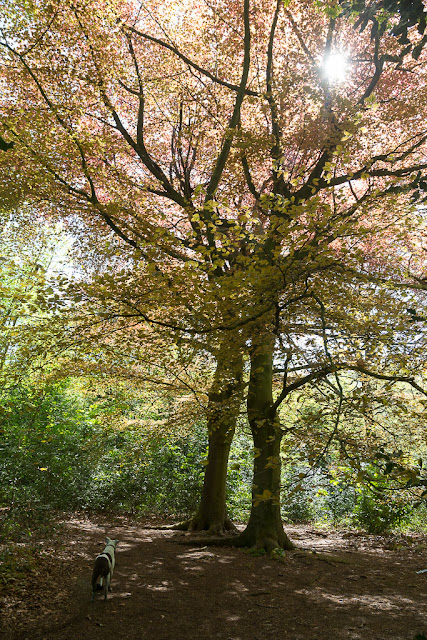 Here's an indication of my current state of mind: I spent all day yesterday thinking it was Monday.

I decided to try a new-ish dog walk and shake up our routines. I took Olga north to Childs Hill Park, and then rather than going west from there toward the Clitterhouse Playing Fields, we went east toward Golders Hill Park and the West Heath. That probably doesn't mean a whole lot to you, but it's something we've never done and it turned out to be a nice almost five-mile walk.

On the West Heath we came across these trees with fresh pink leaves. One of them is the Lulu tree. I'm not sure what kind of trees they are -- beech, maybe? -- but standing underneath them felt like being beneath a pink glass cloche. They eventually turn a hardy green, and then yellow in the fall. 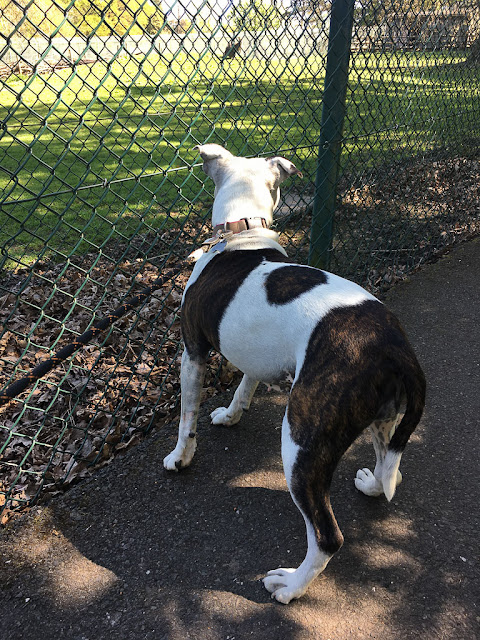 When we passed the little zoo in Golders Hill Park, Olga went on red-alert at the sight of a wallaby. Can't you just see her thinking, "What the heck IS that thing?!" She nearly jumped out of her skin when it energetically bounded away. 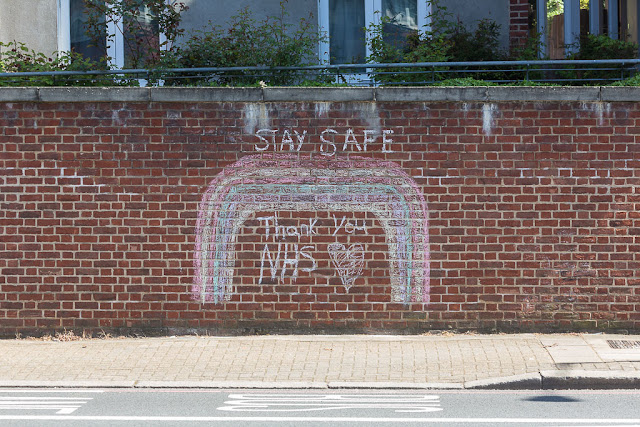 We saw several signs created as a tribute to the National Health Service. The rainbow has become a symbol of encouragement and thanks during this virus crisis -- I guess the idea is, after a storm, there's often a rainbow. 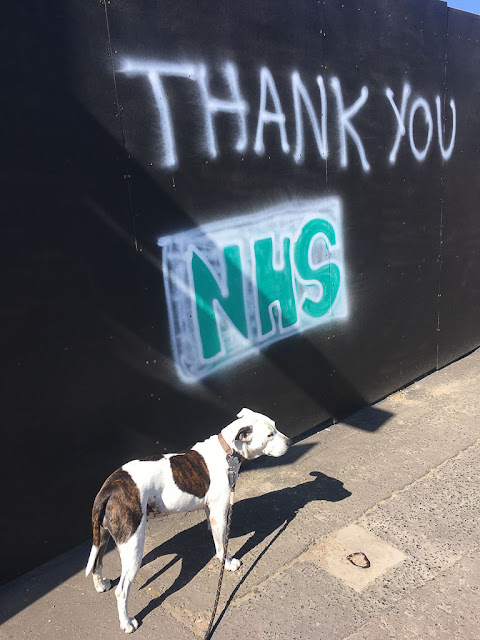 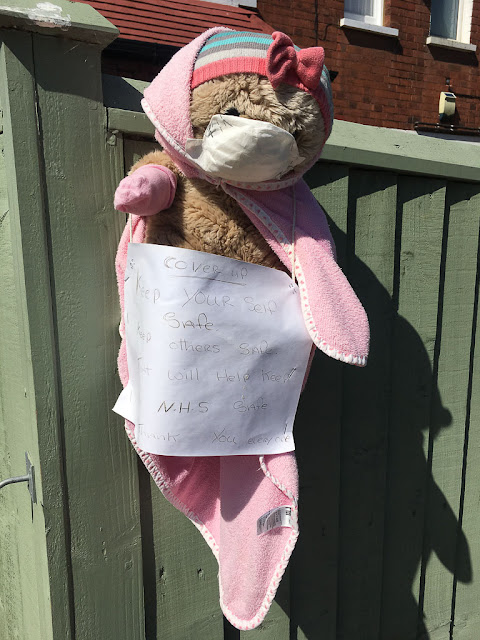 This curious-looking creature was suspended from a fence with a sign: "Cover up: Keep yourself safe. Keep others safe. That will help keep the NHS safe. Thank you everyone"

(For the record, the British government has so far stopped short of recommending masks for the general public, even after the CDC and authorities in some other countries have suggested them. The London mayor has asked that we wear a cloth mask when out in public in places where social distancing is impossible. Fortunately, I've been able to maintain distance almost everywhere. The grocery store and a narrow footpath near the cemetery are my only tricky spots.) 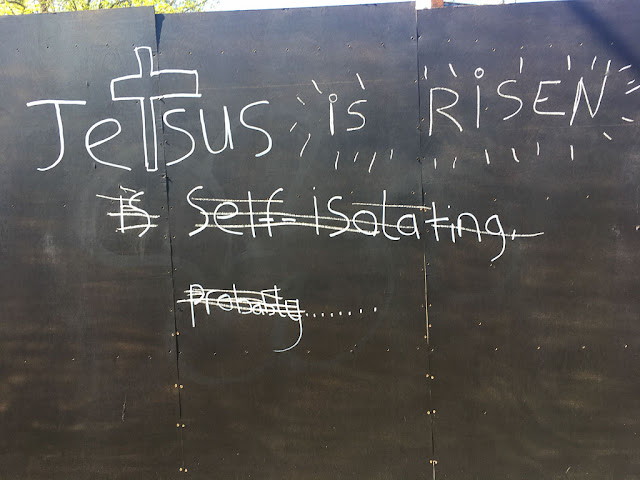 Back home again, I lay in the sun on a blanket in the back garden and read more of "City on Fire," which as I've said previously is about New York City in 1977.

A few days ago, I quoted a couple of sentences from the book. Here's another passage I liked: "It seemed impossible to believe he'd chosen to live here, at a latitude where spring was a semantic variation on winter, in a grid whose rigid geometry only a Greek or a builder of prisons could love, in a city that made its own gravy when it rained. Taxis continued to stream toward the tunnel, like the damned toward a Boschian hellmouth. Screaming people staggered past below. Impossible, that he now footed the rent entire, two hundred bucks monthly for the privilege of pressing his cheek to the window and still not being able to see spectacular Midtown views. Impossible, that the cinderblock planter on the fire escape could ever have produced flowers."
Posted by Steve Reed at 6:13 AM

I vaguely remember City on Fire, but i love that passage you quoted and might have to dig it out and read again! One of my favorite passages about New York City was in a book, I think, about cricket of all things. Netherland by Joseph O'Neill. I loved that book and remember the beautiful passage about NYC.

I wonder who Jetsus was? Perhaps a fictional character. Does he appear in "City on Fire"? "Sitting in the tired art deco diner that overlooked Marcus Garvey Park with a fading and familiar portrait of Marilyn Monroe on the opposite wall, Jetsus heard the distant sound of a fire engine transecting the city and stirring his espresso macchiato with an old hotel spoon that had lost its sheen his inner thoughts schlepped to a weekend in The Hamptons long ago when clouds hung heavy upon the marine horizon and he felt at peace."

Steve, I notice that one of your photos for the April 14th post has now been affected/deleted by the "No Entry" bug. Have you come across this problem before and how should it be addressed? I have lost several images this way.

Have just begun City on Fire. Yes, a LOT of words, but wonderfully written. Then again, I'm only up to around page 40 I think.

I'm not sure I could maintain focus long enough to finish a chapter of that book, much less the whole thing. But that's just me. I'm having a hard time with that right now.
Love the signs. The Jesus one made me smile.

I love that photo of Olga trying to figure out what the heck - that's how I feel most days :)

What a pretty tree! That story about Olga watching the wallaby made me chuckle. I wonder if she dreamt about it later.
Another colorful quote from that book. What a wonderful way with words.

Five mile walk with a dog is a very good walk.

Looks like a nice walk there. I love those trees. It looks like they are embracing each other. The quote is a wonderful description of NYC. It reminded me that I lived in Long Island at the same time, 1977 and took the train into the city very often.

It's good to have a regular route, to see how things change with seasons..but a change of route is a healthy thing too!

My blog has also had the missing photo bug. I've asked the blogger help page for help, but so far have not heard back. Anyway, it's a manual fix. Click Design, Posts, then click Edit on the affected post. Click HTML in the upper left hand corner of the page, and scroll through your code. Most html for a photo is a short block. The html for your missing code will be a very long block. Delete starting at "div class" and down through the last "div". Then you will have the laborious process of finding the photo and putting it back. I had to fix about 5 posts, and it's very annoying. That long block of html seems to be the code for that box with the circle with the line through it. One wonders why blogger decided it would be a good thing to replace people's photos. I have started a folder with copies of all photos posted to the blog, so that if I need to put one back, it's easily found.

After reading Allison's fix above I decided if one or more of my photos goes missing my attitude would be "if you missed it the first time that's your bad luck".

Thanks for the instructions Allison! I looked back & I have about 5 posts to fix too. Which super sucks because all of my posts are VERY photo intensive. Fortunately I've got them well organized on my blog. Fun times!

I love the photos. That pink light is beautiful. That is quite an interesting quote from your book. Although, I don't think I'll actually read the book. Enjoy your day, hugs, Edna B.

so nice that people there are so appreciative of the NHS workers. over here the republicans are stirring up trouble with these so called protests which are actually just a ploy to allow Trump to blame democratic governors for the failing economy and during one protest a woman was arguing with a woman in scrubs, a nurse or a doctor I don't know but can you imagine telling a healthcare worker that they are spreading lies?

Good to know you had this walk, Olga needs that. Also, we need to read about it and see your pictures.

The top photo is just magnificent. And all the ones of Olga, of course.
The quote reminds me of Bernard DeVoto. He was a wonderful historian but always used ten words when one would do just fine.

Padre: I like the affirmations too. It's nice to see some positive energy out there!

Elizabeth: Interesting! I never read "Netherland." I'll have to check it out. My favorite New York book is still "Slaves of New York" by Tama Janowitz. I've read it a couple of times.

YP: Maybe he was related to the Jetsons? I'm not sure someone would be stirring an espresso macchiato and dreaming of the Hamptons on the edge of Marcus Garvey Park -- although, granted, that area HAS gentrified.

Mitchell: Let me know what you think! Like most books, it gets better as you go. You're reading an electronic version, right? I'm curious how they're going to handle certain graphic elements that are printed in the book. (Mainly the "zine" that Sam produces.)

Ms Moon: I find reading harder than I used to -- my focus is continually pulled by stuff going on around me. But I think it's important to persist and in the end I'm usually thankful I did. (Usually.)

Bug: She just could not believe her eyes!

Sharon: Definitely unlike anything she'd ever seen before!

Red: Yeah, I didn't realize it was that long, actually, until I came home and plugged it into Google Maps.

Robin: You would probably appreciate the book, having been there at that time. I wonder how accurate you'd find it.

GZ: Variety is the spice of life!

Allison: Thanks for the hint. It seems you can also just remove the photo in "compose" mode and upload it again. (Which saves having to mess around with html code.) I fixed the one YP pointed out but I can't go back and look for any others that might be missing -- I have way too many posts! So hopefully Blogger will fix this on their own.

Catalyst: Yeah, I mean, honestly, not many people go back into the archives, do they?

Bug: I'm going to wait a while and hope Blogger does its own fix.

Edna: I don't think I've ever seen pink trees quite like that. I don't think they look that way for very long. We caught them at just the right time.

Ellen: Those right-wingers in the states are MANIACS. American politics has always had its John Birch lunatic fringe.

Sabine: Thanks for those links! I think you're right. I hadn't heard about that phenomenon.

Penelope: Ha! I think it's all about the skill of the writer. Sometimes more words add, and sometimes they detract!