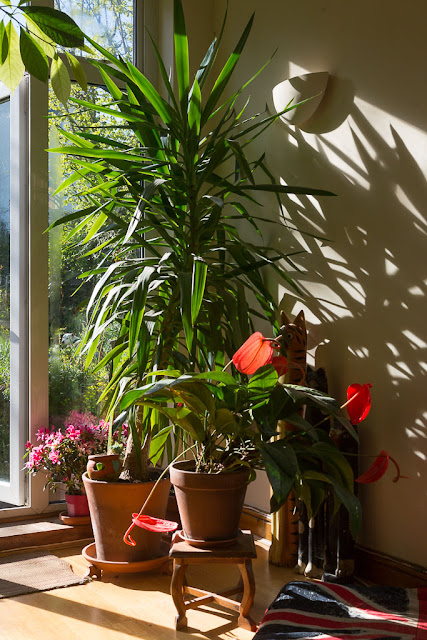 I call this photo, "Where's Waolgado?"

Another quiet day at home -- as if I even need to say that. Olga and I took a walk to the cemetery in the afternoon, and that was about it for excitement. Going there almost daily, I'm beginning to see patterns among the other visitors. For example, there are a couple of older guys who sit near the chapel -- each on a separate bench -- and quaff tall cans of beer while chatting. They are probably pub mates who can no longer go to their usual pub.

I also saw three teenage boys lounging in the park with their bicycles, and a couple of muscle-bound military-looking guys doing pullups on the exercise bars. (If the children's playground equipment is closed, why is the adult playground equipment still open?) One woman appeared to be meeting with her trainer, working out with him but wearing a mask. A father played football with a young boy. Over the weekend I was surprised to hear an ice cream truck making its rounds, chiming its silly music. I suspect much of this activity falls outside the government's expectations for the lockdown, but the exercise guidelines are very vague.

Dave and I watched the Queen on television on Sunday night, delivering her brief message about national resolve during this crisis. I'm glad she made an appearance, even though she said nothing particularly earth-shattering. After all, if you're going to have a Queen, shouldn't it be for moments like this? I bet the cameraman who filmed her was in a full-on spacesuit.

And now Boris is in intensive care, which I find frankly scary. I don't know why the virus shouldn't affect Boris badly, as it affects so many other people badly, but if someone in his position of power with access to excellent medical care still winds up in intensive care, that shows how insidious it is.


On to something happier -- our garden fox(es). I put out some chicken for them the other day. I thought they'd eat it right away, but they didn't find it until the second night. Here's a little video -- first you see a tiny mouse, almost invisible except for its bright little eye. Then a curious pigeon investigates the chicken, but decides against cannibalism. Finally a fox shows up and eats most of it. The fox looks like he has a bald patch in his fur -- he may have mange, which is a problem among London foxes. 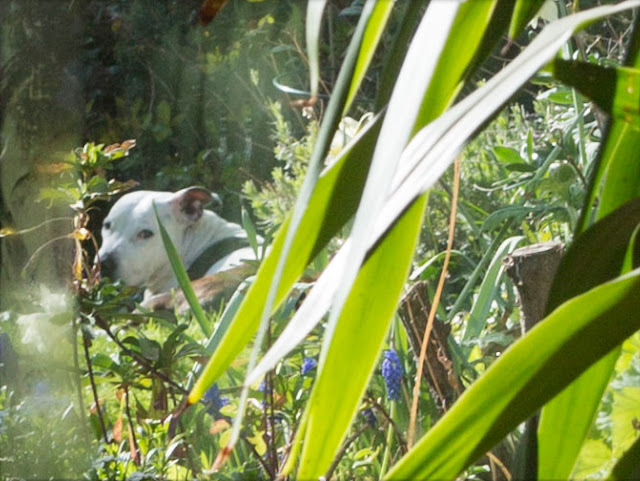 Did you find Waolgado? Here's a close-up to help out.

The New York Times has an interesting column about well-known photographers working in the age of coronavirus -- how their work reflects the urban emptiness and isolation of the times. I especially liked a line about Instagram filling up with "quarantine content," including "pets surprised by their owners' sudden ubiquity." Dave and I often joke that Olga must wonder what the heck is going on -- why we're around all the time. We're interfering with her five hours of daily napping!
Posted by Steve Reed at 7:36 AM

Olga is probably wondering why she can't have more walks since you are home...Why do your urban foxes have a mange problem?

I know what you are saying about people not strictly abiding by the guidelines but I forgive them as long as they are keeping that two metre distance. There has to be some common sense in all of this - in spite of the terror and having said that I am planning to drive to a different suburb for a nice walk on the edge of the city later today. Please don't snitch on me!

Like Olga, our Sammy believes that since Da is home, he must track his every move. They could both use a nap as all this attention is wearing them out.

I LOVE your snoop camera. I found the Queen's speech comforting and reassuring, as she intended I am sure. AND Boris , arrogant prick, I haven't a lot of sympathy, though this virus is hell, he jumped on the "Herd immunity" BS, and put an entire UK in danger. Like trump. Gov. Cuomo's dailies are most welcomed! Olga loves having her Dads at home I am sure! She sure is a cutie pie.

I'm sure Olga is relishing all her extra attention now that both of you are at home all the time. I hope your foxes are okay. Thank you for feeding them. You stay safe and have a wonderful day, hugs, Edna B.

The foxes have to be so wary- a metaphor somehow for us in this time of plague. At least she can see what's stalking her.

Staying home for you must be a challenge. It's a challenge for an old retired guy like me . After three weeks I want to be out again and go where I want without concern.

I'm glad you posted that last photo, it helped me locate Olga in the first photo. I saw that patch on the back of the fox. It looks like someone took the clippers to her but I know that's not true.
I really am struggling with this staying at home thing.

The fox is a dainty eater compared to every dog I ever knew, who would slurp up the entire bowl and swallow it whole. We're going to pick up groceries Wednesday, we sit in the car and they bring them to us. It will be interesting to see how much of the order we actually receive. So that's an outing. Like Sharon and Red, I'm sick of staying home, I want to get in the car and go somewhere.

Love watching that fox eat. I think it's really kind that you put out food for him/her. I finally found Waolgado. Well done!

Our Cat has become very vocal, protesting and confused about the interruption in HER routine, with just Moving In it was a double whammy for her... new environment and now these pesky Humans are always here, WTF?! Yes, when Prince Charles and Boris came down with it, and I'm certain their handlers were trying to keep them particularly Safe... and they'd have Primo Health Care... it is all the more unsettling!

I feel so stupid. I thought Waolgado was the name of that creature perched behind your plants. I had to compare your close-up with the original picture to finally see Olga off their in the distance. That fox seemed to be, um, needing some toilet paper toward the end of that video.

You need to start a whole Where's Waolgado series, now that we know what the heck we are looking for! lol

Lucky fox with his (or her) chicken! I bet it will be back for more. I think our cats are mainly enjoying us being at home-more food, cuddle and play opportunities!

Where's Waolgado? That foxed me! I need to think outside the square - or in this case outside the room...
Inside the room has the lovely cluster of plants, not to mention the wonderfully sharp mesh of shadows on the wall.
The Queen does not make earth shattering statements. As the Monarch she leans more towards restrained reassurance which the English people understand.
Earth shattering statements can be left to heads of various nations throughout the world who can be relied on for self aggrandisement, hyperbole and total bullshit.
Alphie

E: I guess just because they're wild animals, they're prone to diseases. Something called sarcoptic mange seems to be a problem for them.

Mitch: I could publish a book!

YP: I certainly won't snitch, but I DO think people are confused about what they can and can't do. I guess the risk of driving is that you might have an accident or break down and thus be forced into contact with people -- admittedly a remote possibility. I don't see any harm in your countryside walks.

Mary: There is something very INTENSE about being trailed by the dog all day. There's a lot of expectation!

Linda Sue: There IS something karmic about Boris suffering from the virus, but I don't wish it upon him and I certainly don't want to see him die.

Edna: I think the foxes are OK, more or less. Wild foxes in London apparently have pretty short life spans. The urban environment is hard on them, with traffic and garbage and everything else.

Ms Moon: They're always very alert. I'm sure they smell Olga and know there could be danger about.

Red: Well, we're lucky to have our outdoor space and I can still walk and exercise the dog. I do miss being able to go to a museum or take a photo walk in a different part of town.

Sharon: Yeah, it's a drag and it must make city photo blogging a challenge!

Allison: It's surprising how long it takes the foxes to eat. Like you, I expected them to wolf down their food, but they never do. (I guess that's why it's called "wolfing down" and not "foxing down," LOL!)

Robin: I actually bought a can of dog food just for the foxes. Dave thinks I'm crazy.

Bohemian: Moving is ALWAYS hard on cats. I remember my cats used to stay under the bed for days whenever we moved!

Catalyst: The foxes spray everywhere. I think it was marking its ownership of that spot where it found food. As for Waolgado, glad you figured it out! The cat figures behind our plants are actually named Wabi, Sabi and Bobby. I haven't blogged about them in ages but we've had them for years.

Jenny-O: Perhaps it will be an occasional challenge. LOL

Sarah: We occasionally leave food for the foxes in that back corner, and I think they know to come around and check.

Alphie: Yeah, I know what you mean about the Queen. I actually appreciated her appearance. Restrained reassurance is a good thing right about now.