Parakeets and the Moon 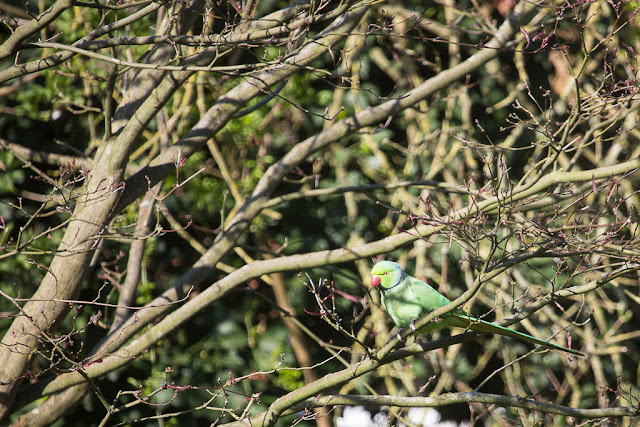 The ring-necked parakeets were at our bird feeders several times yesterday, flashing bright green in the garden. At one point we saw about six of them, but of course the minute I got out my camera they swooped away like a Brazilian dream. They're very vocal and not shy about announcing their presence.

Speaking of Brazil, we haven't heard anything about our travel plans this summer. You may remember (or maybe I never told you) that we scheduled a trip to Brazil for late July. Rio de Janeiro has been on my bucket list for decades, and I thought I was finally going to get there. Now I doubt it's going to happen, but so far it hasn't been officially cancelled. I guess there's still time to see how things play out, but given the Trumpian rhetoric from the Brazilian president I'm not optimistic that coronavirus is going to be well controlled there.

Mrs. Kravitz is still working on planting all of her free plants. She hired a gardener to come in for a day and get some of them in the ground, but she still has about 100 to go. She put a tray of plectranthus, which she didn't really want, out at the street, and I took them and planted them in hanging baskets. They're not something I would have bought on my own but I didn't want to see them just go out with the trash. She also gave me a tray of violas which I put in another basket, and now it's like the Hanging Gardens of Babylon around here.

I don't know how I ever managed working full time. I have so many household projects to do. (Ask again in a couple of weeks and I may be singing a different song.)

One of our walls was damaged a few years ago when we had a plumbing leak in the hall closet. It bubbled and streaked our new (at the time) paint job. Fortunately we saved our extra paint so I hauled that out on Tuesday and repainted the wall. Now that's fixed. There's always something next on the list. 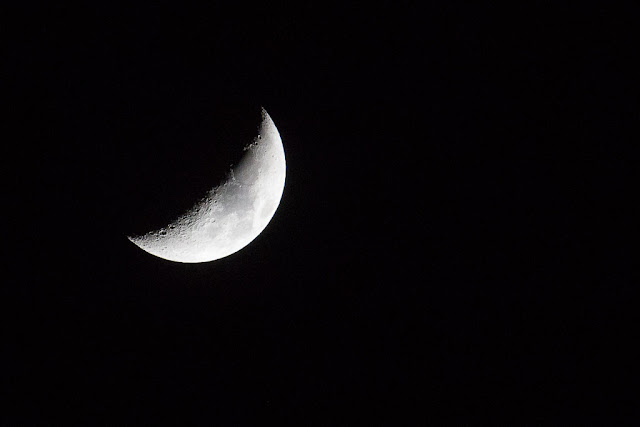 This was the moon a couple of nights ago. We had unusually clear skies and I was trying to shoot it through the bare trees, but I couldn't really get the exposures right so I settled for the moon on its own.

Last night I polished off the bottle of Chivas Regal that Mr. Slovakia gave me a month ago. When I told Dave he said, "You drank that already?" Well, if you have one cocktail using one shot almost every night it really doesn't take that long. Now I can go back to gin, my cocktail-hour drink of choice.

I've heard several people say they're drinking more these days. When we're all just sitting around the house it's a temptation, I suppose. I'm being careful not to up my intake overall!
Posted by Steve Reed at 6:48 AM