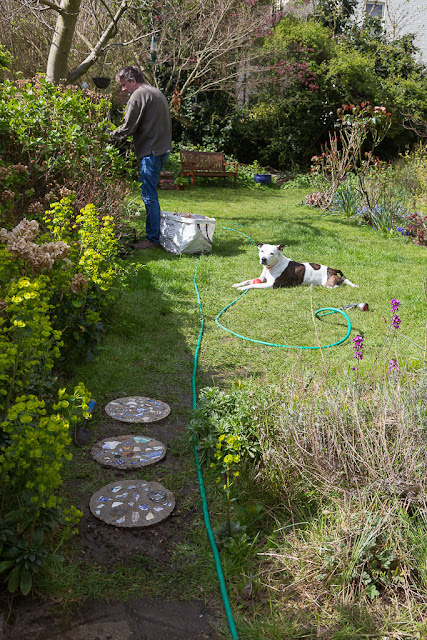 We installed our new stepping stones yesterday morning, made with the chips of china I've collected while walking Olga. They turned out pretty well! 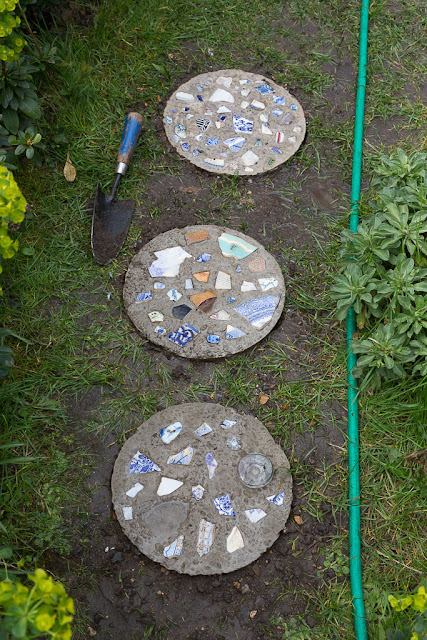 They lead from our steps into the garden, a strip of grass that always gets worn and muddy. I dug out a circle of soil and nested the stones into the ground. This was harder than it sounds -- below about half an inch of dirt were rocks, pebbles, construction debris and other compacted, hard stuff. I guess it's good because it gives support to that well-trodden area, but it was a pain to dig and even out.

I put the stone with the hunk o' glass nearest the step, with the glass off to the right side where it's unlikely to be in the way. Turns out it doesn't feel uneven at all, even if it does stick up a bit. My feet couldn't tell!

Just before I started the project, Dave suggested removing all the grass and putting in bark or plantings around the stones -- he argued that we'd only have to dig the area once. But that meant we'd have to delay their installation to order materials. I just wanted to get them in, and dammit, I had a plan. I was frankly quite cranky that he was changing things up at the last minute, after we'd talked about this for weeks. I'm not sure he understood my attachment to my agenda, but we went ahead and put the stones in. I suppose we can dig the area out more in the future if we want to, but after Dave saw how hard the soil is I think he may have changed his mind. 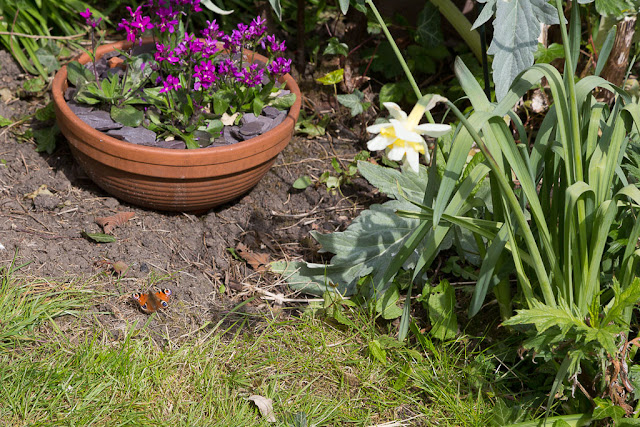 While we were working a peacock butterfly flew up and landed on a sunny patch of dirt. I only had a chance to get one shot before Olga charged up and scared it away. Doesn't it seem early for a butterfly? Still, I was so glad to see it, considering we had chilly temperatures in the 40s (F) just a few days ago. 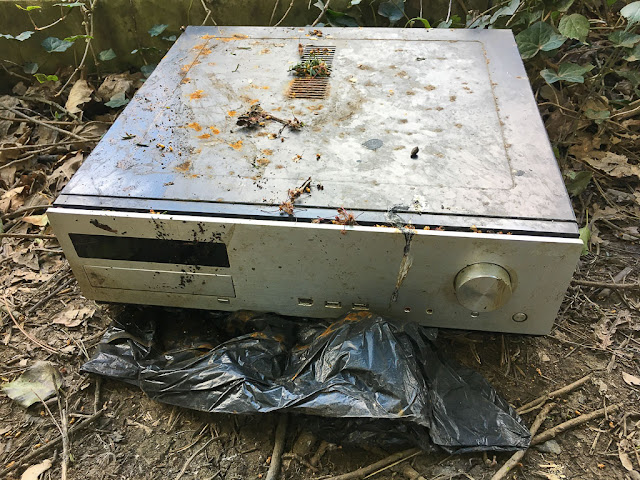 Olga and I took our daily walk to the cemetery. Here was my rubbish clean-up find for the day -- a rusty stereo component of some sort. I have no idea exactly what it is. Anyway, it went into the bin. (Thank goodness there are big bins at the cemetery.)

Then I went grocery shopping, never my favorite task. I felt a bit crowded in our little neighborhood store, even though Waitrose was lining people up and controlling access. There's just not much space in that shop. But I was able to buy everything we needed, including eggs, and I could even have bought toilet paper if we'd needed any. It's nice to see evidence that people are calming down and we're leaving hoarding and panic-buying behind.

Oh, and we're on Spring break, for what it's worth. No schoolwork until April 14. That means more to Dave, with all of his distance learning and Zoom classes, than it does to me, just working on my little library projects. I'd originally planned to be in Florida now, in the alternate universe of non-COVID normalcy. But hey, a vacation is always nice!
Posted by Steve Reed at 6:23 AM

The stepping stones are a great project. I hope they wear well. And that quick grab of the butterfly is beautiful. Enjoy your time off work.

The stepping stone look good and do the trick. Glad to see you had your hose pipe out, we had to water yesterday as some stuff looked droopy, I felt a bit guilty with all the rain we've had but it had to be done.
Looks like today will be sunny again so make the most of it and keep safe both of you.
Briony
x

Mrs Kravitz's Diary April 5th 2020
Yesterday afternoon, as I was practising my belly dancing routine, I heard a row in my American neighbours' garden. It was like all hell had broken loose. The handsome teacher was yelling, "We need to surround them with bark chippings I tell you!" The snide librarian bellowed back, "BUT I HAVE A PLAN DAVE!" They were arguing about the fancy circular paving stones they made last week. The heated row went on for ten minutes and I expected it would all end in a punch up but their dog started barking like a hell hound and they calmed down. As usual, the snide librarian got his way! I went into the kitchen to prepare another batch of dope muffins. You've got to have something to ease you through this virus lockdown.

I'm in the garden today x

The paving slabs look great! I may have missed an earlier post about this, but where did you get all the china pieces? I read about the glass piece and the photos you took through it-which were interesting. Like a fish eye lens. I might start on the garden this week, especially if the sun continues to shine.

I love those stepping stones. They look great! That butterfly is so beautiful. I'm so glad you photographed it. I've never seen one and probably never will. What a beauty.

Nice! Your garden just looks lovely and the stepping stones are a fine touch.

Sounds like you old practise archeology in your back yard.

Your stepping stones look great in your yard. As for that piece of technology that you found, I think it was for playing CD's on the computer. Or maybe an 8 track player. Just a thought. Stay safe and have a wonderful day, hugs, Edna B.

The garden looks lovely but I do wonder why a cemetery has such large bins. Brings to mind strange goings on in a cemetery:)

But really, who leaves crap like that in a cemetery to begin with.

I would feel the same way about installing the stepping stones. I'm not good at changing my plans.

People who dump stuff anywhere are evil, but dumping in a cemetery seems over the top evil.

The stepping stones look great as does Olga lounging in the sun. It does seem early for butterflies when the temperatures are still hovering in the 50's. But, maybe the English butterflies have adapted. Your latest clean up at the cemetery is so strange. People seem to treat the area like a city dump. It just seems wrong.

I think your stepping stones look great. The chips in them seem to glow as if lit from inside. Good job, you two.

Those stepping stones look great! I'm the same as you are - once I've made up my mind to do something I do NOT want any alternative opinions about how to do it!

The stepping stones add so much to your garden path. I think it is such a fine way to honor the stories in the pottery.
I am sure Dave was trying to be helpful by tossing out your plan at the last minute and suggesting another. All the togetherness of sheltering in place is helping many happy couples discover ways to improve their partners and bring them closer together. Lol After all that I hope you had two gins and three glasses of wine to celebrate your victory.

the stepping stones turned out nice. good that you went ahead and got them in instead of delaying it. no reason why grass can't be dug up after. my quarantine project apparently is clearing that fence.

I'm afraid I'm more like Dave - I like to offer last-minute suggestions to my husband. Never goes over well, I don't know why! lol

I like how Olga supervised you taking photos of the new stepping stones. Nice additions to your garden: Olga, Dave and the steps. :)

Mitchell: Thanks! I hope they wear well too. Time will tell!

Briony: Well, it's been a strange spring. We had tons of rain and then suddenly NO rain. It's been dry as a bone for a couple of weeks now.

YP: Ha! You crack me up. That's pretty much how it went, actually, although our "row" was more of a discussion.

John: A good time for it!

Sarah: When I walk Olga on Hampstead Heath I often find them lying in the dirt. I think parts of the Heath used to be used for dumping, and also china chips seem to come in with gravel used to firm the paths -- maybe gravel taken from the Thames? Not sure.

Robin: They are one of our prettiest butterflies.

Ms Moon: Thanks! They worked out better than I thought they might.

Red: We do, kind of! We've occasionally dug up some interesting stuff.

Edna: I think your first guess is right -- I think it's a CD player.

Lilycedar: Especially not when it's literally five minutes before we're about to begin the work!! I don't understand people who dump trash anywhere.

Allison: It's mind-blowing. It doesn't take much to discard stuff properly.

Catalyst: Thanks! I'm pretty pleased too!

Bug: I'm open to alternatives when we're in planning stages, but not when we're about to execute the idea!

Penelope: Thanks! Yeah, one of my colleagues joked at the beginning of this self-isolation period that it was going to test a lot of marriages. And that seems to be the case for many. Fortunately I personally don't feel tested, just momentarily annoyed. LOL

Ellen: Yeah, we can always add gravel or something later if we want. I really do think that idea has died. That fence is going to take some work!

Jenny-O: Thanks! Yeah, last-minute ANYTHING is often a bad idea. I'm a planner!

Mary: She is always on hand to offer tips!