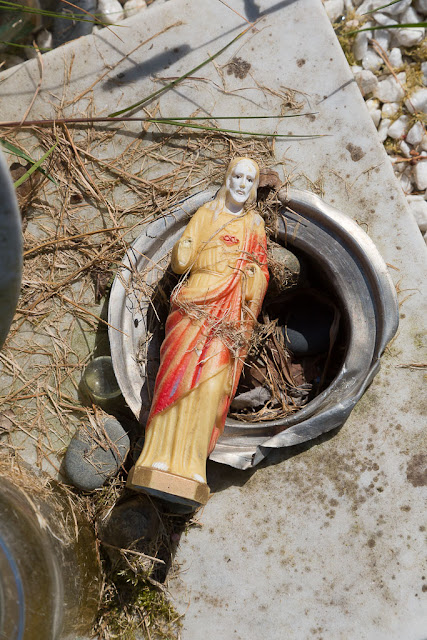 I think Olga is getting sick of the cemetery. Yesterday afternoon as I turned in our usual direction for our walk, she dug in her heels (to the extent that she has heels) and tried to go the other way, toward the Heath. 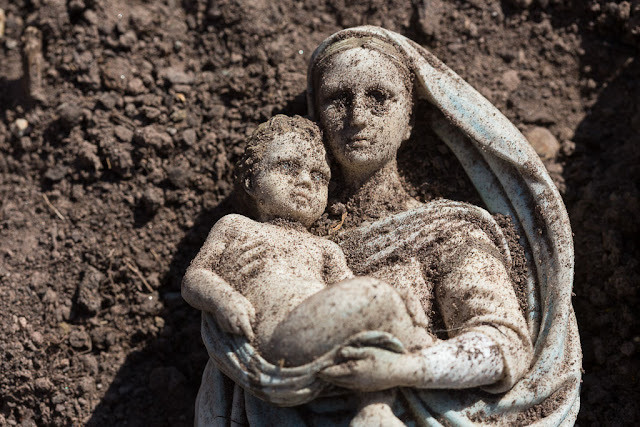 I always figured it was all the same to her, as long as she got outside. But apparently not. 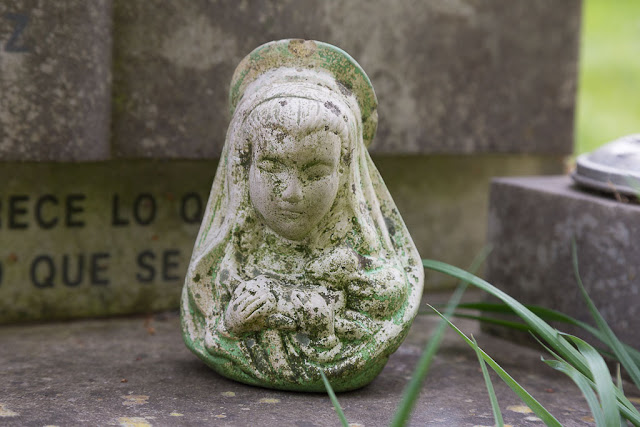 As you can see, though, we went to the cemetery as usual. I amused myself by taking photos of all the little religious figurines on some of the graves. I love how weathered they look. 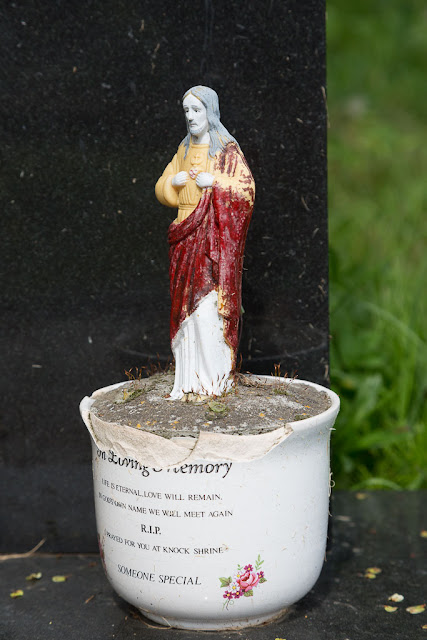 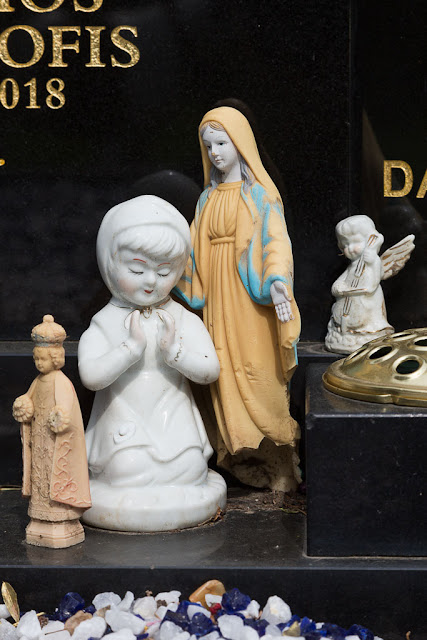 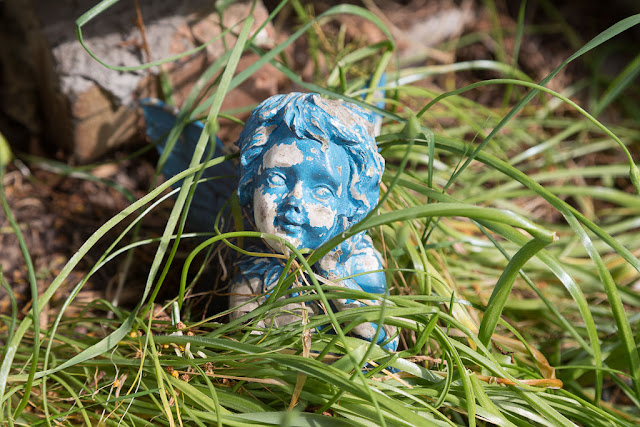 In other news, I have been furloughed from my job. This sounds more dramatic than it actually is -- I'm still employed long-term, and I'm still getting paid my usual salary. The difference is that the school isn't footing the bill. Most of it is being shifted to a government program that supports businesses so they can survive this coronavirus epidemic without laying people off. (I guess our re-enrollment figures for next year, and thus our revenues, are up in the air given that no one knows what the future will bring, and the school has to cut costs.)

This means I can't do any work for school after Monday, when my furlough begins, until at least May 11 -- not even my meager little side projects. The furlough could be extended depending on what happens after that date, or shortened if by some miracle this crisis subsides. I have no negative feelings about it whatsoever. It's basically a bookkeeping change. Dave is still working as usual because he has students, whereas I'm a support worker whose job is vastly curtailed now that I can't go to school. Strange days!

I'm enjoying Garth Risk Hallberg's "City on Fire," though I'm still not convinced it needs to be 900 pages long. The book is so big I can barely hold onto it, and at the risk of sounding like Donald Trump, I do not have small hands. Hallberg has a vivid writing style that produces some terrific sentences. For example: "When Mercer felt that he'd had enough -- that he would explode literally this time, leaving bits of brain hanging from the wallpaper -- he volunteered to let Sally out, followed the arthritic old collie out to the dead grass the porchlight didn't reach. He was shocked each time by all the stars you could see out here, the same ones the Greeks and Trojans had looked upon, a reminder that you were adrift in an insane vastness where nobody knew your name."
Posted by Steve Reed at 6:24 AM

You've been furloughed. More time for reading, gardening and dog walking, at least over the next few weeks.
As for Olga's reluctance to go to the cemetery, that might have something to do with more squirrels and mud on the Heath.
Alphie

By the time you reach the end of that sentence you forget how it began. Surely that is not a good idea for an effective writer. As for the grave ornaments - they are showing what time will do. Placed there with love in sorrow, their original lustre is now weather-beaten and jaded like the originally vivid memories of the deceased. All things must pass.

My heart skipped a beat at the news of your furlough, but your description of what it means sounds very civilized. I hope we will be as protective of people’s’ jobs on this side of the pond. We wait to see.

Well, Happy Furlough then. My husband is still working, his business is still open: he prints massive runs of prescription medical product information, those annoying inserts that go inside every box of pills. I'm pretty sure that nobody reads them, but it's the law that this printed info has to be included, and people couldn't get their meds without having these dopey throw-aways included. So for that, he's an essential worker. Seems dumb to me, but I don't make the rules.

I agree: that's a pretty nifty sentence. I could remember how it started by the time I got to the end, and I'm a moron, so I have to disagree with Mr. Pudding. I like a sentence that starts in one place and ends up in a completely different locale without getting too weird.

somehow I'm not seeing the downside to getting paid for not working.

I don't think any book needs to be 900 pages even if it produces sentences like that. do these people not have editors?

Somehow all of those tatty old statues and figurines are simply depressing. At least the newer ones.
Your adopted country seems to be much better at taking care of its people than the US.
I'm reading a book with short sentences and each one is like a punch to the brain. Short explosions of words that rather amaze me. It's not a long book, either. "LaRose" by Louise Erdrich.

Well, more time for your garden, Olga and that massive tome...and getting paid for now.

Ooh, City on Fire sounds good. I think I'll try it next. My hands are NOT small either, but I'll buy it for my iPad anyway. Then I don't make noise turning pages when I read during the night (although a paperback could be less painful if it hits me in the face when I fall asleep mid-read). Then again, 900 pages would probably hurt, too. I love today's photos (which I could probably just cut and paste from any other day of the week). I'm with Olga. I hate taking the same route day in and day out.

When I'm out walking or riding , it's fun to watch the dogs. They know I'm coming long before the master does. the owner keeps tugging at the leash without knowing someone is approaching. So Olga knows something when she wants to go to a different place.

My goodness, that is a very vivid quote from your book.
It's funny that Olga seems to want to direct her walks to where she wants to go. It makes perfect sense. I'm getting very tired of my usual route for a walk. I'm starting to get bored by it. Today, I'm going to drive over to Scottsdale and meet a friend and walk through an area that under normal circumstances would be very busy with tourists. If for some strange reason it is busier than it should be, we'll leave.
I've been waiting for something similar to happen where I work. I've had no indication of it but, spending my days reading the NY Times instead of working on projects makes me nervous. Since I'm part time anyway it does make me wonder how long this can last.

Sorry about the furlough because I know that you actually do like to work :)

I liked the quote from the book, but I was bothered by the word "out" - twice within a few words. I know. I'm weird. I'm also with Mitchell - I'd be getting it for my kindle app instead of lugging a giant book around. I remember last year finding a favorite book & trying to reread it & then giving up & buying it for my kindle - ha!

I'm glad you photographed all those religious figurines at the cemetery. They were all placed there with love and some kind of heavenly hope. It is interesting to read that quote. It almost makes me want to read novels again.

I enjoyed the photos of the statuary from the cemetery. I guess even doggies get bored of the same thing all the time. Stay safe, I hope there's an end coming soon of this virus. You have a great day, hugs, Enda B.

Hmm, a government paid furlough. I don't think our government would condone such a move. Enjoy it.

that last sentence is so delicious! Maybe you could just start posting snippets like that for readers such as I who have lost eyesight. anyway, thank you for that one, it is so good. Cemeteries are entertaining, rarely sad unless it is a pet cemetery. The little figurines are hilarious.

I do hope your furlough will allow you to continue to be paid. I just have the feeling it's just the next step towards unemployed and unpaid. Not just you, but many.
Olga knows your routes better than you. I think she is trying to keep you from getting into a rut.
The little statues are so sweet. I like seeing items left on graves rather than plastic flowers. I always like to leave some change on their stones, in case there is a toll to pay.

Alphie: Usually we see tons of squirrels in the cemetery, but a lot of them seem to disappear at this time of year, I suspect because they're nesting...?

YP: Well, technically it's TWO sentences, so that helps. I found them very effective!

Vivian: That sounds like a good business to be in in times of medical crisis!

Ellen: LOL on both counts. I agree about the editor thing. EVERYBODY needs an editor.

Ms Moon: That book is on my list, but I haven't read it yet. The only Louise Erdrich I've read is "The Beet Queen," and that was ages ago. Loved it, though!

E: Getting paid is the key!

Mitchell: You might really like it, actually, being from New York. It's all about NYC in the "bad old years" of the 1970s.

Sharon: Well, some governors are starting to talk about opening things up again. Prematurely, I think, but whatever. Maybe you'll see lightened restrictions soon? Hope you were able to get out and see your friend for a fresh walk.

Bug: It would be physically much more manageable on a kindle, I agree!

Robin: I find all the figurines very poignant. Reminders of loved ones, and yet so weathered, you wonder how often the loved ones visit nowadays...

Edna: Oh, they definitely do. Dogs like variety too!

Catalyst: Well, I guess it's a bit like unemployment insurance in the states -- a way to keep money flowing, except in this case you don't actually have to LOSE your job first.

Linda Sue: Interesting how you found the figurines hilarious and Ms Moon found them depressing. I suppose they're whatever we think they are. Although poignant, I also find them weirdly entertaining.

Penelope: Some cemeteries prohibit artificial flowers because they get tangled in the mowers. So far, I'm still getting paid, and I have no indication this is anything but temporary. But who knows?!