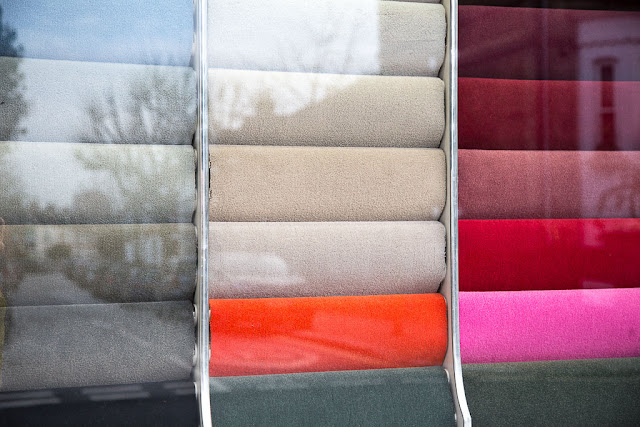 Rain was predicted for yesterday afternoon, which bummed me out, because I really wanted to get walking again on the London LOOP. (It's been more than a month!) Not wanting to slog across wet, muddy pastures in a downpour, though, I figured I'd better not risk it.

Instead I took the dog out early for an extra-long morning walk. We headed up Mill Lane through West Hampstead, past this colorful carpet shop, and on toward Kilburn. Imagine an entire room carpeted in that hot pink, or that vivid orange! Head-splitting! 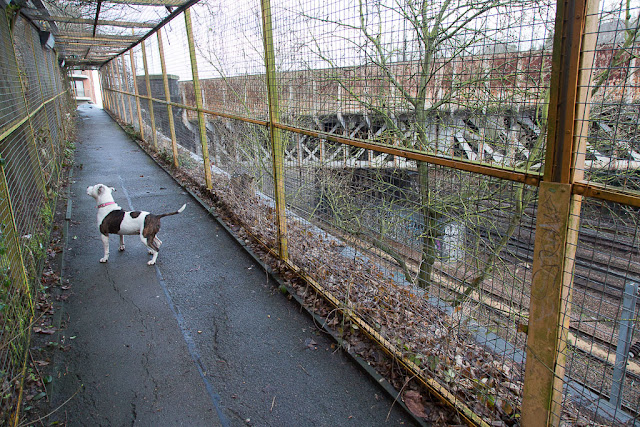 Olga loves walking through this pedestrian cage -- for lack of a better word -- because she always sees squirrels in the trees to the left. They literally drive her barking mad.

The cage exists, I think, to keep people off the train tracks below and to the right. (And to keep them from throwing things onto the tracks, probably.) It's always a little creepy walking through there. 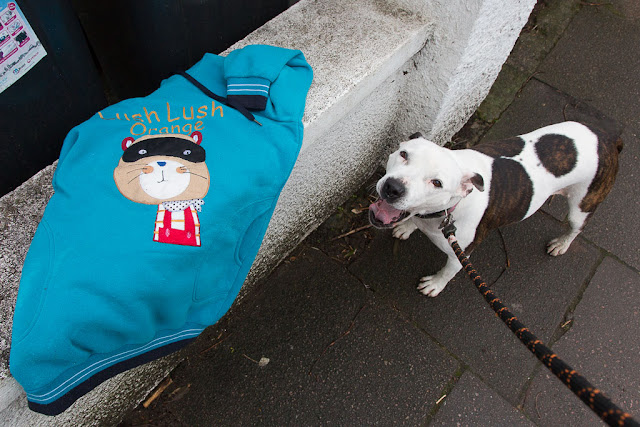 We meandered through Kilburn, where we came across this spectacularly bizarre sweatshirt set out with someone's trash. What does "Lush Lush Orange" mean, and what does it have to do with a raccoon? At least, I think that's a raccoon. In overalls. With a bandana.

I found it hilarious, but Olga was so bored she couldn't stifle a yawn.

From there we went to historic Paddington Old Cemetery, where we'd never walked before. 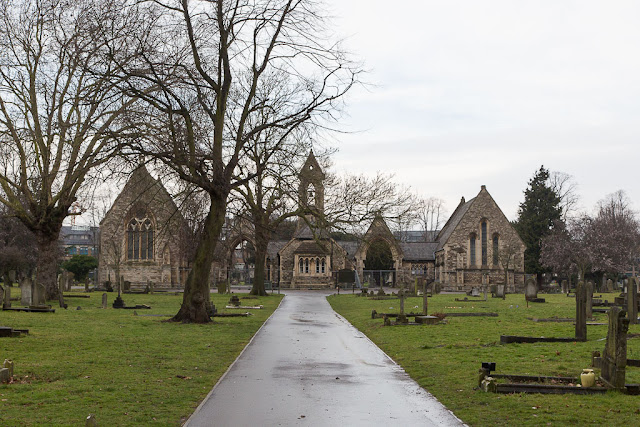 We circled the elegant gothic-style chapels, which date from 1855 and, according to Historic England, are "too dangerous to use."  They're fenced off, as you can barely see in the photo above, but I got a few glimpses of the impressive stained glass windows.

And from there we headed home, where I laundered the "Lush Lush Orange" sweatshirt for our charity-shop donations bag. Someone somewhere will love it, don't you think?

Must say I like the bright carpets but can imagine what they would look like after a few hairballs have been ejected on to them, ha ha
Forgot to mention that I liked the chewing gum on a previous post. Wondered how it was done and why it hadn't been worn away.
Briony
x

No middle ground for that carpet shop - beige, beige, beige, then PINK!!
After our last trip to the park I now understand the term "barking mad."

Ah- I can just see those psychedelic colored carpets in a mod room in the sixties! A bit of the old Clockwork Orange? Speaking of orange.
I'm sure you googled "Lush, lush orange" which I just did- what DOES it mean?
And what does "too dangerous to use" mean? My house is only four years younger than that chapel and I use it daily with no ill effects!
Perhaps they are worried the beautiful stained glass will fall out of a window and decapitate a worshipper. That would suck.

so they are just going to let it deteriorate and fall into complete ruin? seems a shame. I don't know about lush lush orange, but Lush is a body works store where they make lotions and creams and bath bombs and weird soap.

Head-splitting is a perfect description for those carpet colors. Stomach-churning would also work. Like everyone else, I have no idea what lush lush orange means. It was nice of you to rescue it for the thrift shop though.

You're making me google Lush Orange!

It looks like a perfect day for a walk. When I went out to rescue the Times from our driveway this morning it looked just like that. Overcast, damp, cool but not cold.

I love that you connected the orange carpet and the Lush Lush Orange sweatshirt in the same post . . . and of course I googled LL Orange as well, with no results except the Lush products . . . it's a slow day here :)

That Lush Lush Orange sweatshirt would go well with my Candymaker Revenge trousers.


P.S. I don't have Candymaker Revenge trousers. "Candy maker Revenge" were the most random words I could think of.

I don't think it's a raccoon. It looks more like a cat with a burglar mask. The closest I got to an answer to the sweatshirt is this: Someone at tempolush.com is producing comics. And they seem to be located in the UK. And the cat is a cartoon figure, soooooo ......... That's the only connection I could find, but who knows.

I had red carpet in my childhood bedroom. It started out with pink walls, but when I was a teenager I picked out this sort of quilt print wallpaper for two walls, yellow for two walls, and then a blue bedspread. It was lovely! Ha!

I would totally wear that sweatshirt! Maybe even out in public!

I feel sad about the chapels, but I guess it's just not practical to save every old building. Although 1855 doesn't seem especially old for England!

your pictures from your walks with olga remind me of the scenes from classic british mystery series. so evocative!