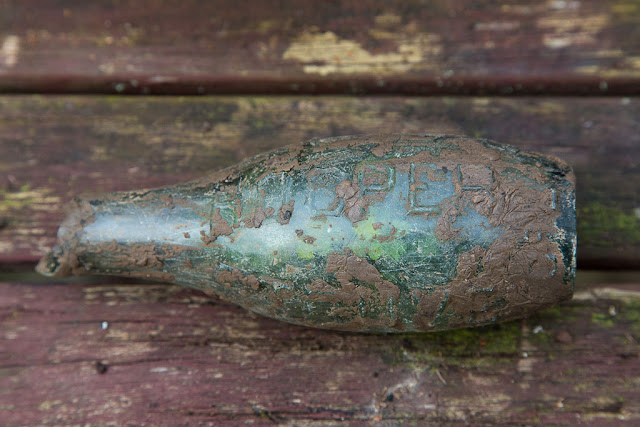 Not long after I started my LOOP walk on Sunday, I saw the telltale signs of an interesting bottle sticking out of the mud.

Most of it was completely buried, but I could tell that it had embossed lettering -- which is often a sign of something old or unusual. I grabbed a stick and gradually dug it out of the muddy path. (Don't worry -- this wasn't in the asbestos area!)

Here's the result -- a vaguely bowling-pin shaped vessel, about 6 1/2 inches tall, that says "Hooper Struve" on one side and bears the royal warrant on the other. "To H. I. M. the King, by appointment," it says.

The fact that it specifies "king," and not "queen," suggests that it dates from between 1901 and 1952. It turns out that Hooper Struve was a mineral water and lemonade manufacturer based in Brighton. It operated there until 1963; I'm vague on what happened to the company after that.

There are lots of photos of old Hooper Struve bottles online, but the only one I can find resembling mine is in this photo, lower left. And there's no information about it.

So, anyway, after I dug it up, I put the bottle in a plastic bag (an unused dog poo bag, to be honest, because being a dog owner I have them on me at all times) and I stashed it in my camera bag. I could tell that the neck was broken but I saw no other glass pieces at the site, so it must have been broken long ago. If you look closely at the top photo, you'll see that the bottle was so full of dirt that tiny plants were growing inside it! Nature had turned it into a terrarium! 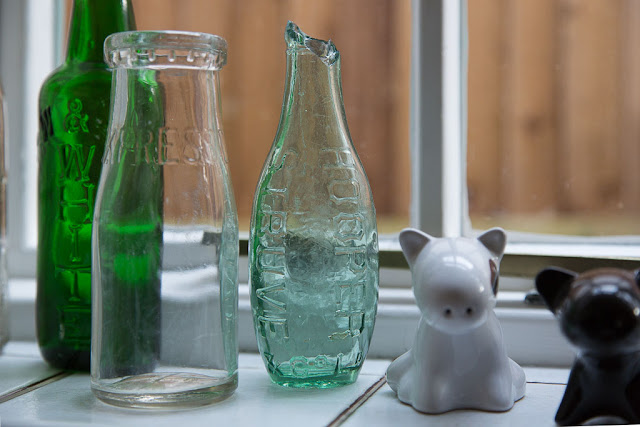 As much as I liked the terrarium effect, when I got home I cleaned it up -- easier than expected -- and this is the end result. Another interesting find for the kitchen windowsill!
Posted by Steve Reed at 6:19 AM