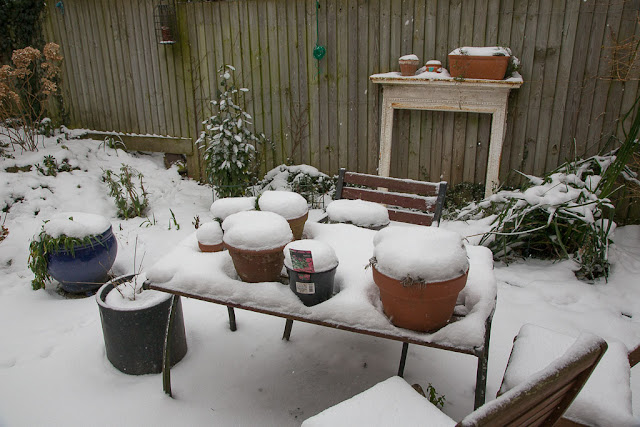 This was the patio yesterday morning. If some of those plants weren't dead before, I have a feeling they are now! But we'll leave them for a few weeks to see what happens.

The snow is already melting a bit, no doubt to the relief of the critters... 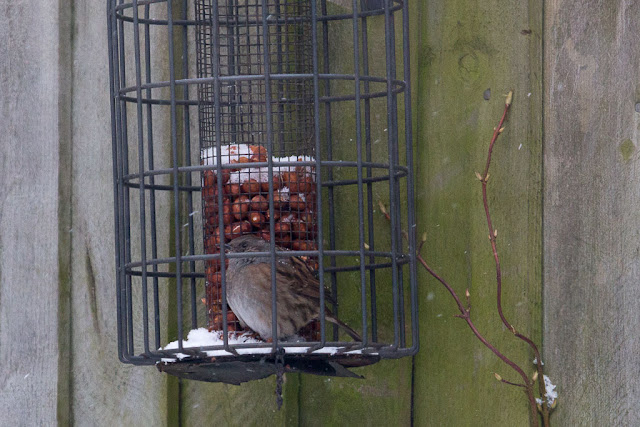 ...like this puffed-up little dunnock on our peanut feeder yesterday. I saw a few other stray birds, mostly tits, but no sign of any squirrels. They must be curled up in a nest somewhere.

Dave and I spent the day doing stuff around the house. I washed all the new t-shirts I brought back with me from Florida. I tried wearing them right out of the bag but I felt like there was some serious off-gassing going on -- I smelled like a chemical factory. I'm not thrilled with their quality, either -- they look almost as thin as the shirts I've been wearing for eight years, even though they're the same brand from the same store. I think the overall quality has diminished. Why did I bother to buy new ones?

We also watched movies -- "The Meyerowitz Stories (New and Selected)," which I've had saved on my Netflix for months now (it was excellent), and "The Big Lebowski," which Dave said he'd never seen. Of course, he fell asleep about ten minutes into the movie, so I ended up watching it by myself (again) and he's still never seen it. 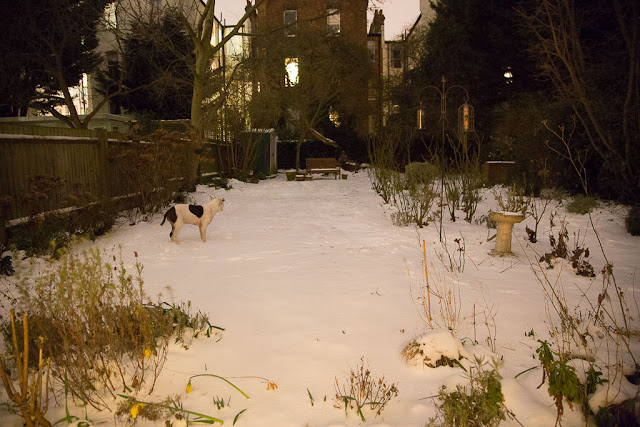 I took this photo last night from the back door. You can see what I was talking about yesterday -- all the ambient light being reflected from the snow and the cloudy sky. (The yellowish light in the foreground is coming from our living room windows.) There is no real darkness after a snowstorm!

Olga blends into the landscape, doesn't she? She walks around in the snow with no visible discomfort, but I don't think she's thrilled with the situation. She's ready for things to return to normal, and so am I. Today's temperatures are supposed to be right around freezing, but I hope they'll be warm enough for the melt to continue.
Posted by Steve Reed at 6:16 AM