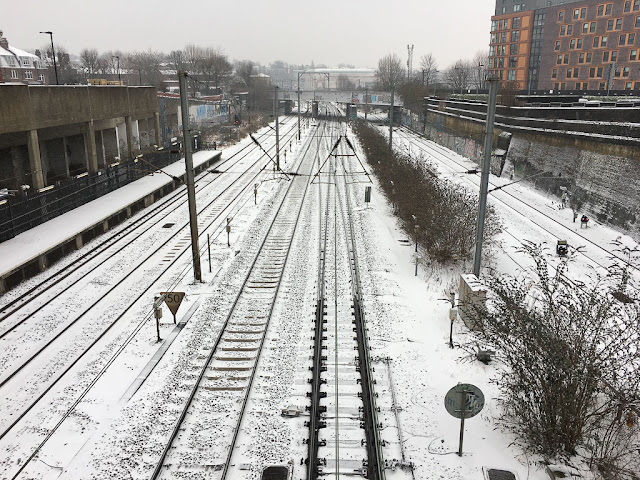 I've had about enough of all this snow. It's starting to feel like Doctor Zhivago around here. I know this sounds silly to those of you in snowier climes, but it's March, and we Londoners are just not used to it! (Whine, whine, whine.)

The melt is continuing, but there was a temporary setback yesterday afternoon when more snow came swirling down. We were all sent home from school the moment the school day ended, all after-school activities cancelled. 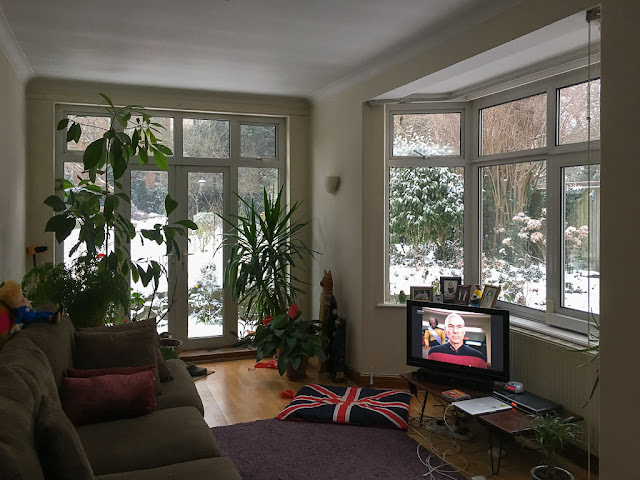 So this is what our afternoon looked like -- quality time with Captain Picard.

Also, our trash collection didn't come yesterday, as I suspected it wouldn't, but there's no word (that I've been able to find) on when that will happen.

One good thing about being stuck inside: I'm forced to continue working on indoor projects. For example, I've been typing up more old journal entries. I'm almost up to 2004, which means I only have a few years left before all my handwritten journals are digitized. (To what benefit for the wider world I'm not sure, since they're not publicly available and besides, who cares? But it will sure make it easier for me to refer back to them should I ever have the impulse.) 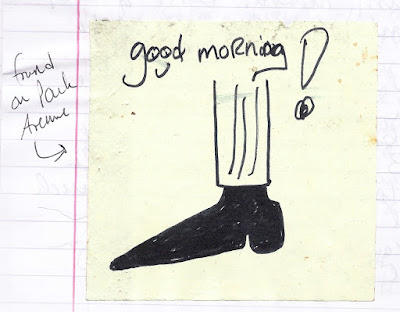 I came across this little Post-It note that I glued into the journal back in 2003, having picked it up on Park Avenue in New York. Kind of peculiar, don't you think? What could it possibly mean? Why a shoe?

Politically, it's been an interesting week. President Trump (writing that still curdles my blood) is either utterly without conviction or incredibly stupid, or both. He veers from announcement to announcement with no preparation, surprising everyone -- including his staff and all the members of his party. It was refreshing to hear him speak in favor of some common-sense gun control on Thursday, but I knew he'd walk it back almost immediately. He would never be permitted by the rest of Republican-dominated Washington to advance a cause that's hostile to the NRA, but he'd win a small measure of admiration from this voter if he did.

Meanwhile, Brexit grinds onward, and it's all so unnecessary. I just want it to go away. Such ridiculous, shockingly expensive folly!

I love finding things like thaat, though it is frustrating that you will never know what it means! I agree about Trump and his seeming slight concession to common sense. It is good that businesses are taking some actions, maybe that will have some kind of influence. Agree about Brexit too-it would be interesting to see what historians make of it all in a hundred years-embarrassing history!

What shocks me is that you do not appear to have warm curtains up in your living room. They are very useful in keeping out the cold.

With your journal, may I suggest that you put it out there as an e-book. Your family and friends can then read it and perhaps some strangers too. I guess there are some seedy episodes that will require censorship before publication.

I still can't and won't put those two words together. No way is the NRA going to allow Trump to change anything, not after paying him 30 million. and these tariffs are stupid. he's already brought one industry here to its knees with tariffs on imported solar cells. he doesn't understand the need for advisors and advice, he's the smartest guy around, just ask him, he'll tell you. and when it all falls to ruin like everything he does, he'll blame everyone else.

He is president in name only. Or something like that. When other countries start publicly announcing that they are "numb" to his doings, it is telling.
Snow! Too much snow! By the way, I love all the windows in your apartment! How lovely.
You are much like my husband in that when you start a project, you FINISH IT! Okay, sometimes it takes Glen decades, but eventually, he gets it done. He was soldering under his bathroom when the sun went down last night.
I have no idea what the shoe note means but it is rather cheerful for a shoe note.

Your weather is easier to understand when you put it how very rare snow would be in March.

It seems so odd to see snow everywhere outside your windows. Rain, yes. Snow, no.
On the political scene, you are so right. He has to the worst leader (that word is so not right) that has ever resided in the White House. I kind of wish he would fight for gun control against the NRA because then they would go after him with a vengeance and maybe we could get rid of him for good.

What are the odds?
One doodles a small picture of a shoe with a smiley face on it. It winds up on the streets of New York where it is scooped up, preserved and later finds a home in Great Britain, where years later it is posted to the internet for all the world to see.
What are the odds?
TJD

I like your commitment to digitize your journals. I have been keeping a journal since 1992, the year my dad died. I don't write in it daily, but at least once a month when I summarize what's been happening. It's so useful in piecing together forgotten things.

I think Trump does all the crazy things he does, spur of the moment insanity, as a way of keeping the media off the Russia trail. Everything is a diversion from that. He is the worst thing that has ever happened to our country, and I fear what it says about the masses who voted for him.

What a beautiful t.v. room you have though it looks chilly today with that snowy scene outside all of those wonderful windows. And I was amused that that "veddy, veddy British" pillow that I can presume is a doggy bed for Olga sits right next to the t.v. so you'll always have to have your eyes on her.

What a great shot of the snow on the tracks! I wish our staying-inside weather more often motivated me to start and/or finish jobs . . . it seems to do the opposite!

I was surprised by what Trump said, too. He can still be unpredictable, I guess, even with the predictableness of his craziness. If that makes sense.

What do you think of the new Star Trek?

Why can't they just do another Brexit vote? Surely that would be less expensive and might set things right. I know, I'm being naive. It's like saying why don't we just vote again for president. Disasters abound. And yes, that post it shoe is quite odd, but what's even more strange is that you picked it up on Park Avenue so many years ago and now it will exist for all eternity on the internet! Also, your TV corner is lovely with all those windows onto the garden!