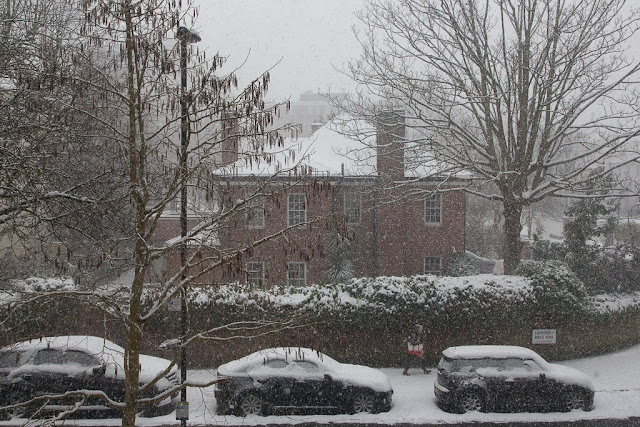 We're still in the deep freeze! I took the picture above from the window at work in midmorning yesterday -- the snow was really coming down. That was after more snowfall during the previous night.

As I write this, Dave is informing me that there's no school today. He just got the e-mail. Snow day! It's the first of my education career in London. A certain hardy Welsh blogger mentioned in my comments yesterday that Londoners are "so sift" when it comes to snow. I am unable to find a definition for "sift" used in that sense in any slang dictionary, but I think he's saying we're making a mountain out of a molehill.

London is just not prepared for snow, though. We get it so rarely. It really does have the potential to paralyze everything. 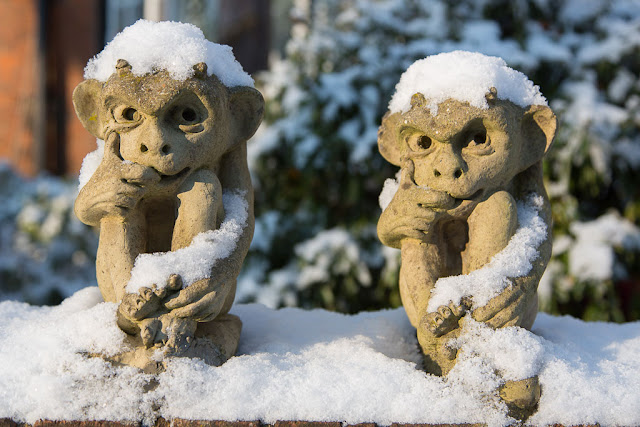 My eccentric neighbor's garden-wall gargoyles seem to enjoy the snow -- or at least, their mischief is undiminished. 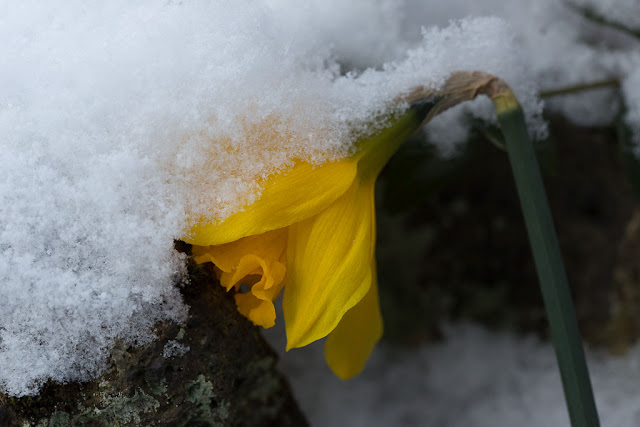 Our daffodils, however, are looking pretty sad. At least, they were when I could still see them. Now they're all buried! And supposedly, more bad weather is coming today.

Frankly, I could use a day at home. I assume we'll have to make up for it somewhere else in the school calendar, but I can handle that if I don't have to deal with dodgy transportation and slushy pavements. Dave made soup and we're going to watch some movies.

One weird side effect of the snow: there's a lot of light outside, even during the night. I suppose our urban light is bouncing off both the clouds and the land, leading to an all-night twilight effect. I was able to take pictures in the garden long before dawn. (Not very good ones, though, which is why you're not seeing them here!)
Posted by Steve Reed at 6:41 AM

Ha-ha! I doubt that Fifty Shades of Gray meant "sift"! It's a typo my friend. He meant to say that southerners are soft (i.e. not battle hardened and likely to moan about the slightest weather challenge). Here in Yorkshire we regularly refer to people from London and the south as "southern softies". By the way, I loved the gargoyle picture... and not a shop front or a passer-by in view today!

Oh -- LOL! I thought it was some regionalism that I didn't know! Ha!

In answer to your question, no. As an example, my medical policy under traditional Medicare: prior to Obama, disability recipients were not eligible to purchase one to cover what Medicare does not. Now, though we can, the prices are exorbitant, so most don't afford them. The average cost for someone like your mother is about 2300 per year. Mine was $7000. My insurance guy says the insurance industry is to blame for deliberately pricing folks out of them.

What wonderful pictures!
So much snow, Steve! And if the snow shuts down London, just remember that a little bit of rain has been known to shut down LA. It's what we're not used to that messes us up so much.

Fun! Fun! Fun! Snow days are such wonderful gifts. Nothing better than holing up inside and watching movies with your gourmet chef. Enjoy.

Yes, snow is serious for any community that is not prepared for snow. Enjoy your day. Here, March came in like a lamb.

I see your snow is not a good snow as it is still there. well, a good snow in that it gives you a day off, the only reason for snow.

I'm glad you're getting a snow day! I love the gargoyles too. It's rainy & dreary here - but warm(ish).

You prompted me to check the Abbey Road webcam. That's quite a sight with all that snow on the ground. How is Olga taking to the snow? Enjoy your snow day!

Beautiful snow there. Love that gargoyle shot. Maybe you won't have to make up for a snow day. I remember when I was young in New Jersey, we had snow days and didn't go to school. If we exceeded four days, then we had to make it up at some point. I hope you just get to enjoy the snowy white sparkly beauty of it, and then it will all disappear and the daffodils will return.

Okay, you win. Our snow is all gone today, actually by mid-day yesterday, and the temperature is warming up. Supposed to be in the 50's tomorrow. Enjoy your day off.

We are at about 20% of annual rainfall here in sunny California...again. Then yesterday it started to dribble rain a bit, heavy in the night, still at it and they say for the next 4 days, small break and then again this coming weekend. It's like the season got shifted about 6 weeks. This should have been happening in December. We got snow in San Jose on Mt. Diablo.
Looks beautiful where you are, like where I grew up in the high desert of Oregon.

That's true - one of the things I enjoy about snow is the change in the lighting from all the reflection it causes. A snow day - they usually gummed up my teaching plans, but I loved that sudden day off anyway.

Aw, man - I LOVE those gargoyles! They're awesome to start with and the snow on them just enhances their mischievousness :)

You're really getting hit there, for a place that usually sees little to no snow, and as others have said, it's the weather you're not used to that becomes a problem. And I know what you mean about the light. It's one of the good things about snow. Without it, everything here is brown and gray and quite dreary.