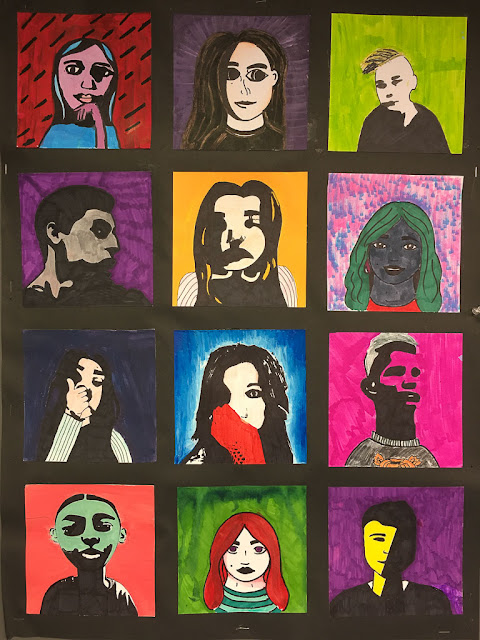 This is another work of student art that hangs in the cafeteria at school. It's intriguing, isn't it? I'm only showing one, but there are actually several panels of 12 faces each, all deep in shadow and somewhat caricatured. I assume the students portrayed themselves, or maybe a friend. 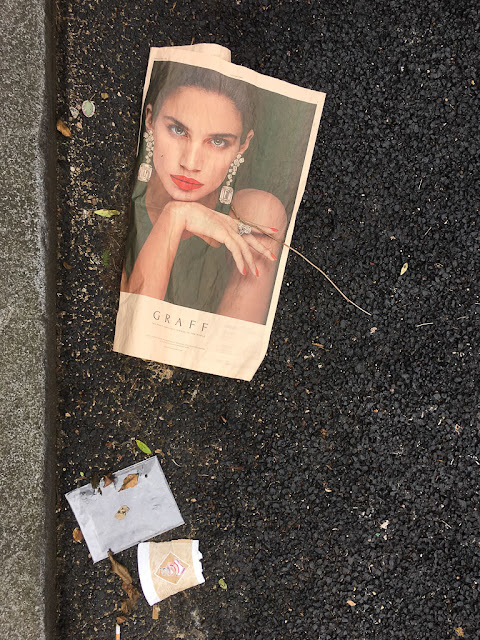 On my way to work yesterday I came across this glamorous woman, lying in the gutter with her diamonds. Rough night, I suppose. She's lucky she didn't get rolled for that jewelry.

Speaking of glamor, Dave and I regularly watch a TV quiz show called "Eggheads," which involves a new team of challengers each night going up against a panel of Britain's top quiz champions. Last night we watched an episode originally broadcast in January, and we were thrilled to see the challengers were a team of DRAG QUEENS! (Well, four drag queens and one woman, on the far right.)

I happened to snap that photo just as the show faded from one camera angle to another, giving the double-exposure effect. "The Queens" weren't the best quizzers, but it was the most entertaining "Eggheads" episode I've seen in a while.

I kept thinking, "Would American television show this?" And actually, it probably would. Drag queens are practically mainstream these days.

Otherwise, I don't have much to report today. When I wasn't at the circulation desk, I spent yesterday helping to compile a summer reading list for 8th graders, and weeding more books in the fiction section. Routine!
Posted by Steve Reed at 6:16 AM

"Eggheads" moves along so slowly and nine times out of ten - surprise-surprise - the resident egghead team wins. Perhaps you should enter a team from your library. They could be called The Bibliophiles or The Gestapo.

What books are you putting on the reading list for the 8th graders? I'm curious. :)

Clever student artist - your school has some talent there.
How great to see drag queens become almost mainstream in this increasingly repressive age.

You do have some good artists at your school.
Routine- my life. Sometimes I feel like it's the only thing holding me together.

That Graf jewelry ad looks so '80s -- it's all in the eyebrows. Oh, please, oh please, are the '80s coming back into style? I have a hot pink Corteges jacket with huge shoulder pads that I haven't been able to wear it since 1989 but which I could not bring myself to throw out, and I'd love to have a chance to take it out for a spin someday soon.

Drag Queens are so mainstream these days in America that NPR had to turn to Drag Kings to find their new underground minority. It seems that Drag Kings don't get the recognition and societal support that Drag Queens do, and I admit that I didn't even know there was such a thing, but NPR has educated me on that.

You show some amazing student art. You must have an incredible art teacher and some very artistic students.

the art of the students is almost Andy Wharhol-ish. I like it. and those earrings in that ad must be so heavy! I can't imagine wearing them for longer than it took to take the picture.

Andre Charles, aka Rupaul, brought drag queens into public view in the U.S. years ago, Steve.

As others have said, you have some very talented art students at your school. That piece is great. When David and I worked together in St. Louis and Chicago, he used to take me to see local drag shows all the time. It was always great fun. I've been to a couple here in Phoenix but, they don't hold a candle to those I saw in the other two cities.

That art is very striking. We have no art programs to speak of in the schools here. It's one of the disadvantages of living in a small town in a small and relatively poor province.

That is a cool shot you got of the overlapping screens! Couldn't have planned it any better!

Somehow I missed this post. The students at your school are extremely talented artists! I love how all the photos in this post kind of work together on a theme.