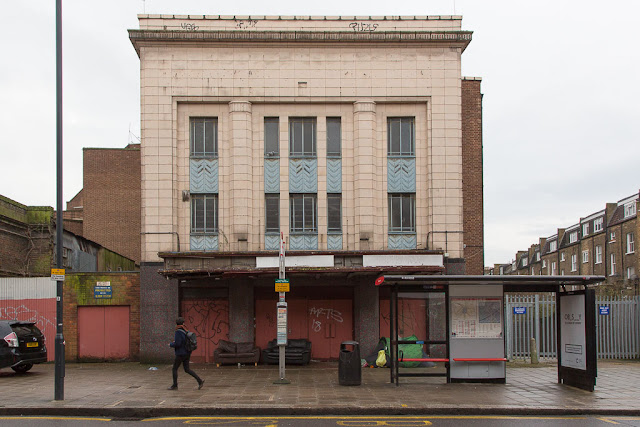 This used to be the side entrance to a gigantic art deco cinema in Kilburn called the Gaumont State Cinema. It seated 4,000 people! I'm not sure what's going on there these days -- apparently the main part of the cinema was purchased by a church, but I'm not sure this side venue (which eventually became an Odeon cinema) is part of that deal. At any rate, as you can see, it's closed up and not in great shape. There were two couches and a tent beneath that awning when I took that photo last weekend.

Thanks for all the mouse info yesterday. I'm (weirdly) not too concerned about it, but I like the idea of putting the dog food in a plastic container. That does seem wise. I may try to get a humane trap and release the critter outside.

I went back to the dentist yesterday to have him take a look at my root-canaled tooth, which has been giving me very mild twinges of pain. He thinks it's just routine inflammation that's part of healing, but he gave me another round of antibiotics in case there's still some infection beneath it. 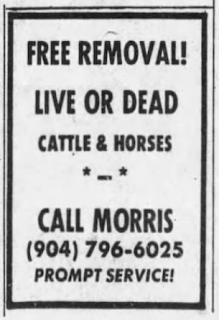 You know how we were marveling the other day at all the information available on the Internet? Well, I was recently looking through old issues of my hometown newspaper, the Tampa Tribune, online. I was specifically searching for a picture that ran in 1988 or so of a bunch of reporters and candidates at the courthouse watching election returns. I was in the picture, and I don't have a copy of it.

Well, I didn't have any luck finding that particular photo -- I'm not clear on the year or the caption or the photographer or even whether it ran in the Tribune. It might have been a competing newspaper. But I did find a couple of other articles featuring me, which I already do have copies of, as well as lots of interesting old advertisements like the gem at left. I wonder if Morris is still in business?

It was fun to browse the paper and remember the ol' hometown before it became the much bigger, flashier city it is today.

The painters are still here, working their way through the flat. All is still chaos. Olga spent last night on the couch -- I think she was waiting for Dave to come home. (As I mentioned yesterday, he'll be in Singapore until Sunday.)
Posted by Steve Reed at 7:17 AM

Most schools are lucky if they have school trips to the local museum or a nearby stately home but The American School has trips to places like Singapore! To me this is amazing.
P.S. Another solid Reedesque photograph!

I was thinking the same thing as Mr. Pudding. I'd know that photograph anywhere as a Steve Reed.

Of all places...Singapore. Is one of the students a son or daughter of the Prime Minister? Because otherwise, I can't imagine that high school kids would be dying to go to Singapore. You can't even chew gum in public there. Sweden, Brazil, Australia, France: those are sexy countries. Singapore?

We used to get the Tampa Tribune. AND the Winter Haven News Chief.
I guess you should do something about that mouse. Rent-A-Cat?

Well, it should be easier to find stuff and yourself now as everything is on the net. sometimes I think too much is there. There are many ,many items on me because of the bird watching group I lead...too many.

We used a Have-A-Heart trap years ago to capture a mouse years ago when we were living in the Sierra foothills. It was great to release that little thing out into the woods behind our house. We waved good-bye and told it to watch out for the foxes, coyotes, and bobcats. I had a root canal done by my least favorite dentist two years ago. It still bugs me. Hope your pain resolves with antibiotics.

I'm with Mr. Pudding. I remember being amazed years ago when a friend who lived in Denver came to Arizona because his 12 year old had to play in a soccer tournament in Tempe. And he said they have been to Cleveland to play as well. Now Dave's students take a field trip to Singapore! What is this world coming to?

I love the façade on that building! I wonder what will become of it. That really is a strange ad you found. I hate to think of what happened to the live animals that were removed. In fact, I don't want to think about that at all.
I went to the Apple store last night to ask a bunch of questions about getting a new Mac. Now I'm a little more excited about the prospect.

So, with Dave away and Olga on the couch, were you doing starbursts a la John Gray in bed last night?? (I think he called them starbursts. Maybe it was starfish. Shoot. I don't have time to go check.)

A humane trap sounds like a good idea. Our cats always alerted me to mice so I just used a gardening glove and a bucket or trash can, but if we didn't have the cats I'd go for the live trap too.

P. S. Hope the antibiotics do the trick with that tooth!

Looks like the cinema from The Shape Of Water

About your tooth problem, may I ask if you are seeing a primary dentist? Years ago I had a root canal but the pain continued. Finally my dentist referred me to an endodontist (specializing in root canals). It turned out I needed a second root canal next to the first. That finally cured the problem. I certainly do not wish that one you but am only offering this information.

Good luck with the mouse problem. We have used mouse have-a-heart traps in the past with peanut butter as bait.

YP: Yeah, the scale of school trips at international schools is pretty mind-blowing, though this one is unusually far! It's only a handful of kids, chosen via audition to play in an international honor band.

Vivian: Oh, but Singapore is quite exotic, I think!

Ms Moon: I wouldn't want to endanger a rent-a-cat by putting it in the same room as Olga!

Red: Ha! Well, here in Europe the law allows people to ask Google and other search engines to "forget" them -- essentially remove them from search results. It's known as the "right to be forgotten." There are certain parameters, though. Like, I don't think you can do it if you've been convicted of a serious crime.

Robin: I'm going to pursue that option, I think! I imagine a released mouse might have a hard time fending for itself, but still, it seems more humane than whacking it on the head.

Catalyst: It IS amazing. I don't remember kids from my high school ever leaving the state!

Sharon: I had the same thought about the animals. If someone is happy to pick them up live or dead, they must ALL wind up dead -- probably at a rendering plant or something.

John: I really am going to check out that film at some point!

Cheryl: I'm seeing the same dentist so far. The pain isn't THAT severe, but I'll ask to be referred to an endodontist if it continues or complications arise. Thanks for the tip!

free removal? what does he do with the dead cows and horses?