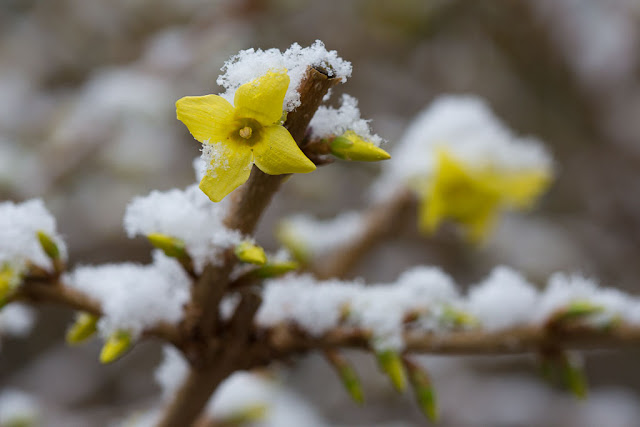 I'm getting pretty sick of snow. Let me just say that.

Winter circled back upon us yesterday, with temperatures dropping as expected and snow falling steadily all day. I'd say there's a couple of inches on our patio table and potted plants. The snow on the lawn seems to have melted a bit, but still -- we're back in the deep freeze.


I took that yesterday morning, standing outside the back door. We are not amused!

On the bright side, the painters are finished. The young guy painting the flat -- who was not the boss who gave us the estimate -- worked all through the morning and into the afternoon yesterday. It was a bit awkward having him here, working in the hallway while I was lying on the couch watching TV, but given the weather I wasn't about to go anywhere. He had interesting tattoos -- outspread wings tattooed onto his forearms. I wondered if they were supposed to mean something, but I didn't ask.

Then the boss showed up and I paid him a portion of the bill. (He wanted it in cash to pay his worker.) I made him give me a receipt, even though I felt churlish for doing so. He kept talking about how nice we were and how tidy the flat is, which is hilarious because I thought the place was a wreck all week. I think he's mainly after a five-star Google review. (We'll give him one. He and his angel-winged employee did a great job.)

I tried to put up the new shower curtain rod that Dave bought, but darned if I can figure out how that thing is supposed to work. I didn't want to wrestle with it too much for fear of leaving marks on the walls. I'm leaving it for Dave to handle when he returns from Singapore tonight. I know -- I'm a terrible spouse. (In my defense, I have entirely reassembled the rest of the apartment, putting everything back in its proper place.)

Mainly I spent yesterday cinematically transporting myself to Miami -- in psychological avoidance of the snow, I suppose. I watched both Tony Rome movies and several old episodes of "Miami Vice." I took Olga to Fortune Green and the cemetery in the afternoon, and bathed her afterwards. Right now she's snoring under a blanket, tucked in with one of her tennis balls, twitching and dreaming and showing no interest in the cold, cruel wintry world outside.
Posted by Steve Reed at 7:51 AM

I know the meaning of all tattoos. It is the same meaning and that is - "I'm a daft idiot with an unhealthy obsession with my appearance, very limited foresight and an inability to realise that many non-tattooed people will view me as a daft idiot."

Well, Mr. Pudding- tell us how you really feel about tattoos.
I can only imagine how tired you must be of snow but won't spring be glorious when it finally comes?
Do you love how your apartment looks? And smells? I love the smell of fresh paint. It smells of new beginnings.
Also? I love the word "churlish."

Snow is pretty, but enough is enough. We're all waiting for spring to really begin. Hoping for warmer temps and bright skies.
Yorkshire Pudding made me laugh about tattoos. I've never gotten one, but I know many people who have them. I've often wondered what it's like to commit to a piece of art inked into your own body for the rest of your life. I get tired of things pretty quickly.

Yes, snow is very annoying, especially when you are not used to receiving it. How would you feel about having 2 to 3 feet of the stuff at one time? :)

Your soil is warm so the snow will disappear quickly. My soil is frozen rack hard so snow comes down and doesn't melt...yet!

Rocky's helper (and youngest son) has both arms as far as I can see tattooed. so glad they are finished and of course you should have asked for a receipt! I feel for you about the snow, a good Florida boy like yourself. although, it does seem you have chosen to live in the north more often than not.

When shall we see photos of the new paint job?

Olga has a very good life. I am imagining how cozy she must feel, walked, bathed and tucked under her blanket, dreaming. She must have very good karma to have ended up in your household! Enjoy your freshly painted house. As for snow I love it when I don’t have to go out in it. And tattoos, I appreciate them when they are below the neck and face. I confess I am as judgy as YP when people ink their faces, but I do believe we must live and let live if one isn’t hurting anyone.

I bet you are glad to have that painting job out of the way. I certainly don't blame you for having enough of the snow. Once is amusing and unique, twice is pushing it's luck.

If you are not used to snow I can easily imagine how tiresome it is to have so much. I love the image of a clean, tired Olga tucked under her blanket. All pets should have it so good.

Yay for getting through the painting and putting-back of stuff! Maybe the rod thing is not you - maybe it's defective.

Your garden looks kinda pretty ( said in an southernamerican accent)