Kong of the Hill 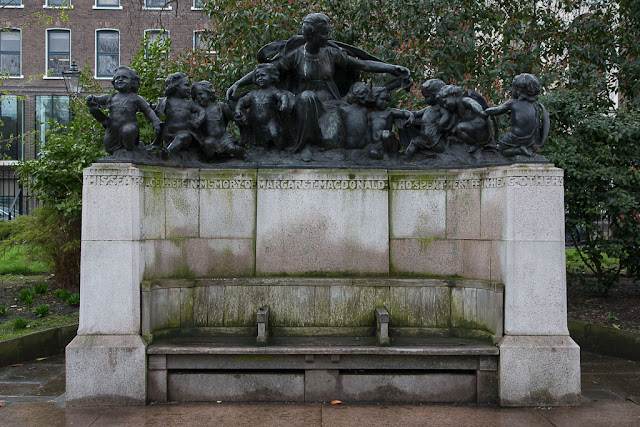 And voila! Just like that, the snow is gone. Our garden is completely green once again, and the plants don't seem too battered, though I did spend part of yesterday morning staking up the remaining daffodils. They'd all been flattened. Dave said they'd probably resurrect themselves, but I figured I'd help them along. With no freezing nights in the forecast, I even moved the fig and our geraniums back outside.

Dave and I went to Sir John Soane's Museum yesterday. It's the home of Soane, a famous Victorian architect, on Lincoln's Inn Fields, and it apparently hasn't changed since Soane's death 180 years ago. It's definitely a quirky place. The rooms are tiny, the hallways narrow, and yet the place is crammed with paintings and sculptures and architectural drawings, stained glass, period furniture and other relics of Victorian life. The art includes a Turner, some Canalettos and some Hogarths. There's even a huge Egyptian sarcophagus, of pharoah Seti I. I've long heard that this is a remarkable museum so it was fun to see it first-hand.

I was most impressed because Soane, who tore down the original houses at that address before building his own, used skylights extensively. He was obviously serious about taking advantage of natural light. He'd be amazed with today's window-wall technology!

Also, he and his wife clearly loved their dog, Fanny. They had her portrait painted and even erected a tall marble monument to her in one of their courtyards. (I suggested to Dave that we do that for Olga, though admittedly it's a bit premature.) Apparently the Soanes weren't so crazy about their own sons, who declined to take up their father's interest in architecture -- one eventually caused a rift by criticizing Dad publicly. Scandal!

Unfortunately, photography wasn't allowed in the museum. So you'll have to settle for a picture of a bench dedicated to British women's and children's advocate Margaret MacDonald, located in the park outside. 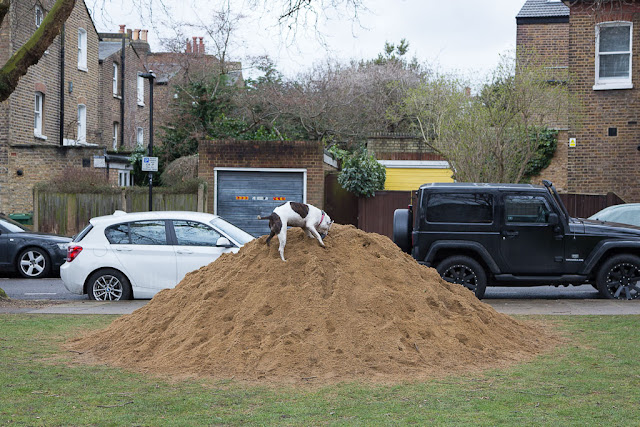 After we came home, I took Olga to Fortune Green and the cemetery for a run. We discovered a large, mysterious pile of dirt on Fortune Green, and I put her Kong on top. Eventually I was able to get a photo as she scrambled up to retrieve it, but it took several tries -- she usually got to the top of the pile before I was ready to take the picture. When the Kong is involved, she moves fast!

Scanning the list of Oscar winners, I'm pretty happy with the outcome. I haven't seen "The Shape of Water," so I can't opine on that one, but I loved Frances McDormand and Sam Rockwell in "Three Billboards" and I'm sure Allison Janney and Gary Oldman deserve their awards because they're always great. I think it's a shame "Call Me By Your Name" didn't win any higher recognition than best adapted screenplay, given how much that movie affected me, but it's better than nothing.
Posted by Steve Reed at 6:53 AM

It's a shame that you didn't call Olga Fanny. If you had done you would have been found yelling "Fanny! Fanny!" on Hampstead Heath when Fanny went chasing squirrels in the bushes.

I'm so glad some of these historic houses have been saved.
Probably the most interesting - and bizarre - houses I've seen was on a trip to California where among other things, we visited the Winchester house. It was built with no plans, just random room after random room, often with doors and windows that went nowhere, supposedly to confuse the ghosts of those killed by Sarah Winchester's husband's rifles.
Unfortunately there's what looks to be a really awful movie about it coming our starring Helen Mirren.

Good fresh dirt . It's what every dog should play in for a while.

sounds like a fun place to visit. no picture of the bench though.

I enjoyed your description of the Soane house. I might have to give it another visit on my next trip. My experience there was not quite so pleasant. When I was last in London, I took the once a month candlelight tour. The whole house is lit by candles and visitors (and there were hundreds) wander through the house by candlelight. Consequently, I spent the whole time looking down at the path for fear of tripping on something and knocking some priceless knick-knack over and destroying it. After waiting in a line for an hour and 30 minutes to get in, I was a little disappointed in the tour. It sounds like this place is best visited in the day light.
PS: The "Potheads" would have set me back $220.00 so it's a good thing it was already sold.

You do get to explore the most interesting places. Even without photos, it sounded great! Haven't seen any of the movies, but would like to see "The Shape of Water."

The approximately twenty minutes I watched of the Oscars involved a hot dog cannon. Then I went to bed.

We watched the entire seemingly interminable Oscars telecast once again. I think this may be the last time. While the technical people certainly do deserve their awards, it seems somewhat pointless to bore the viewers with the presentations. This is why we have always preferred the Emmys telecast. Mr. Kimmel noted that the first Oscars show lasted a total of 15 minutes. It has come a long way (downhill) since that night (or day) 90 years ago.

Now I have a mental image of you repeatedly tossing the Kong on the pile of dirt and running backwards to take the photo, and juuuuuust missing it, repeat, repeat, repeat . . .

That's some bench! Here we get a skinny iron base with three slats for the seat and two for the back . . . modern stuff, tsk tsk

Ah, I see. I thought it was just the wall that supported the sculpture.

I have visited Sir John Soane's house, and I really liked it. BUT!!! If you have not visited it, yet, then you HAVE TO, HAVE TO, HAVE TO visit Dennis Severs' house at 18 Folgate Street. My husband and I visited it last year, and when we were back out on the street we nearly fell to our knees with amazement. It is a sensual and SUPER COOL experience that will leave you speechless. If you have already been there, then you know what I mean.

YP: I wondered that about the Soanes. I guess they just yelled "FANNY!" whenever they needed to! What did the neighbors think?!

Marty: I think I've read something about that house. Sounds like a super-weird experience!

Red: Every dog and every kid!

Ellen: As I mentioned, the bench is in the top photo. It just doesn't LOOK like a bench. :)

Sharon: I could imagine how stressful that place would be by candlelight! Even in broad daylight it felt hard to navigate at times!

Robin: Yes, "The Shape of Water" is on our list, though we'll probably wait for it to come out on Amazon.

Ms. Moon: Any time a hot-dog cannon is involved, that's a signal for retreat!

Catalyst: It does go on WAY too long, doesn't it? We haven't watched the ceremony for years and years.

Jenny-O: I finally realized I could keep the dog on her leash, put the Kong on top of the pile, walk her back to some point away from the pile, and get the camera ready before letting her off the leash. But yes, it took me a few tries before I got that figured out!

John: I agree! They were both terrific.

Iris: Funnily enough, someone at work was telling me yesterday about Dennis Severs' house! I looked it up online and it DOES look interesting. We'll make it a future outing!

Olga must really LOVE her Kong!

I haven’t seen call me by your name yet but I’m looking forward to it.