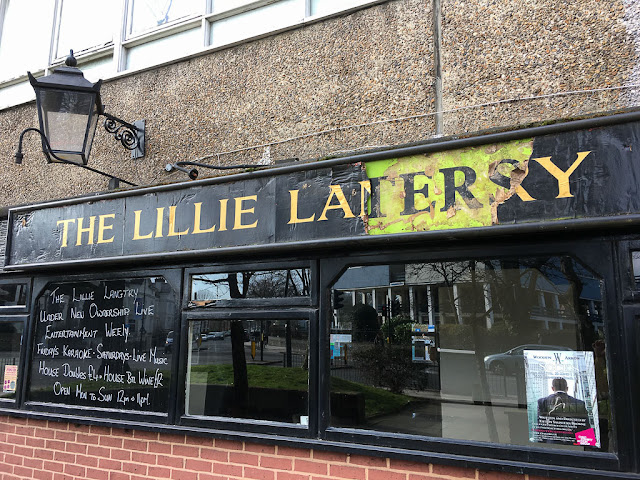 I often pass this pub on my walk to work. It's located on the ground floor of a block of council flats called Emminster House on Abbey Road, and for years now it's been known as The Lillie Langtry. A handwritten notice recently appeared saying it's under new ownership, and yesterday I saw that part of the sign had been pulled away to reveal a bit of the pub's previous name underneath: Cricketers.

Does this mean Lillie is about to go through another name change? Or maybe she's just getting a new sign....? 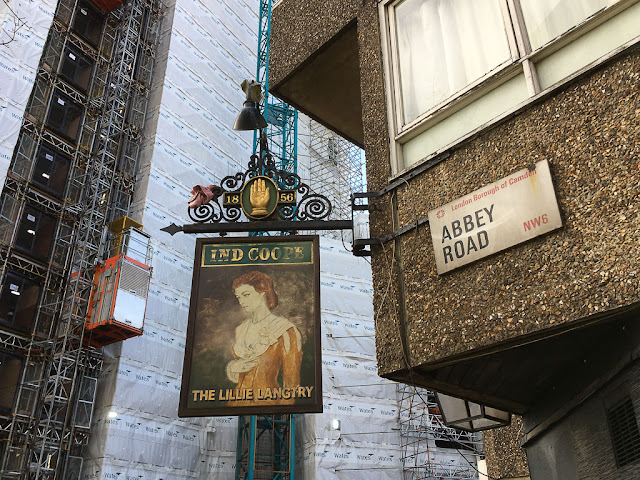 Curiously, this is one of two pubs in London (that I'm aware of) named for Langtry, an actress and woman-about-town in the Victorian and Edwardian eras. The other, which I've photographed in the past, is on Lillie Road in Fulham.

And as a complete tangent, here's an interesting note about the evolution of the Internet. When I wrote in 2012 about coming across the Lillie Langtry pub in Fulham, I wondered whether Lillie Road was named for her -- but I was unable to find out. Today, Lillie Road has its own Wikipedia page that explains the origin of its name -- and it's not named for Langtry but for a local property owner, Sir John Scott Lillie. So, six years later, I have an answer to my question!

I've never actually been in either of these pubs. The one on Abbey Road looks very much like a neighborhood watering hole. I wonder what Lillie Langtry would have thought of that Brutalist architecture?
Posted by Steve Reed at 5:58 AM

Lillie Langtry was one of the mistresses of King Edward VII. If tabloid newspapers had been around at the time this lustful, philandering fellow would have made the headlines every week.

Being Victorian, she doubtless would have thought it strange and possibly ugly...

If Lillie was the mistress of Edward VII, wouldn't that make her Edwardian?

Do you ever just stop and think, "Whoa! I live in London!"?

I was thinking exactly what Ms. Moon's comment said. Seriously, you walk the streets of such history.

I always thought her name was spelled "Lily" and upon looking at her Wikipedia page, I see that was a variation of "Lillie" in her case. I also see that she was born on the island of Jersey so I guess I will now think of her as a Jersey Girl. :^D

As is often the case, I'm off on a tangent that isn't really about the main point of your post - Brutalist architecture . . . I had no idea that's what my university campus was full of! lol Thanks for the continuing education, Steve :)

Yes, please let us know what the new names ends up being.

It always annoys me when they rename pubs. Quite a few around our way have done that and the new names just don't seem to fit somehow.
Briony
x