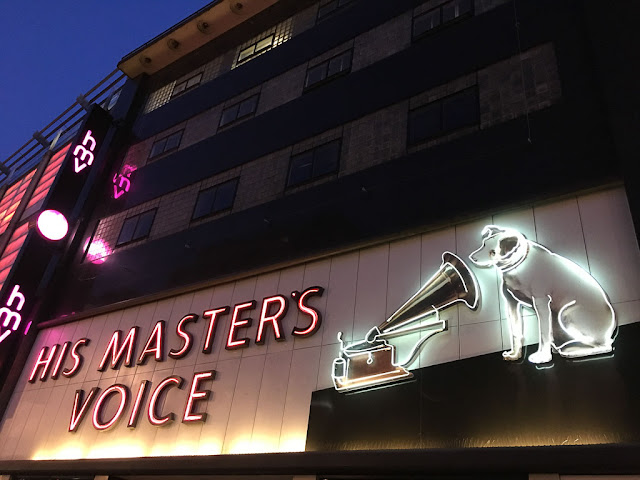 This is the HMV music store on Oxford Street. That sign has been there since the 1930s -- according to Wikipedia, "HMV stands for His Master's Voice, the title of a painting by Francis Barraud of the dog Nipper listening to a cylinder phonograph."

The image was bought by the Gramophone Company in 1899 and used in England as the trademark for HMV, and in the United States for RCA. Here's an interesting photo gallery of pictures from the interior of the London HMV store over the years. I love that photo of customers -- dressed in suits for a day on the town -- sitting in the listening booths, records spinning in front of them.

I came across the sign last night as I was visiting a nearby doctor's office to consult about my painful back. The doctor seems to think I'm just suffering the effects of age, but we're going to see if my insurance will allow me to get a scan just to see exactly what's going on. Fortunately, in the last week or so, I've had very little pain and my range of motion hasn't been affected, so maybe whatever's kinked me up back there is getting better. 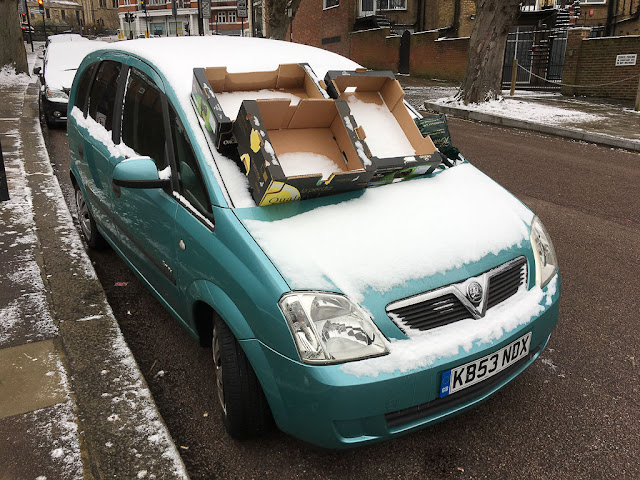 Our snowfall seems to be dissipating. The sidewalks near our flat were like glass yesterday morning, slick with refrozen meltwater. I was afraid Olga would pull me down during our walk. But this morning there's only a hint of snow left in the garden and there's even a bit of rain falling, so I guess the temperatures have inched up a bit.

I was amused by this person's novel approach to keeping ice off the windshield -- I wonder if it worked? 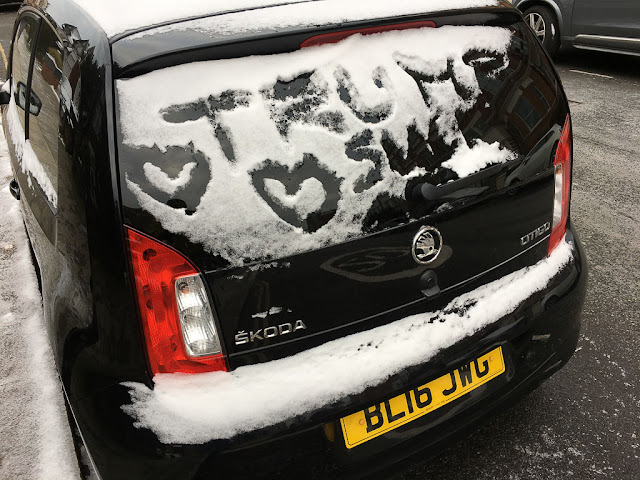 I swear I did not write that. I agree, though.

Still trying to relocate myself mentally to warmer climes, I finally read "Freddy Goes to Florida," which I recently mentioned finding in the library. It's a cute book -- very old-fashioned -- about a bunch of farm animals who travel south for the winter. I wonder if kids would go for it now?
Posted by Steve Reed at 7:07 AM

You have probably investigated this already but there may be a range of gentle exercises you could do regularly to ease your back pain, build up vital muscles and make you more supple. Some such exercises are demonstrated on YouTube.

By the way, what does Trump suck? Would I be wrong to imagine the testicles of a hog?

Your photo of the windscreen covered in cardboard boxes is shoot. I guess London drivers don't keep a Winter weather tool kit in their cars. Years ago I had a boyfriend, born and raised in Los Angeles, come out to Pennsylvania one Summer to visit me, and he got in my car and picked up at the ice scraper from the floor near the passenger seat and held it up, asking: "What's this?"

Mr. Pudding, Der Trumpf sucks up to Putin and Neo-Nazis.

There used to be a store in Thomasville, Georgia that had a plaster, I suppose, LHMV dog. I wonder if it's still there.
Glad you saw someone about your back.
In response to Mr. Pudding, I believe that I would say that Trump sucks donkey d**ks. I love that the snow graffiti person put hearts in the message too.

I'm amazed at how much snow you have there. I imagine you're impressed with it too!!!

have you considered chiropractic care for your back? if it's sever you might have a pinched nerve. do you lift with your back or with your knees? do you bend at the waist or at the hips?

I really truly feel for your back. As you may remember I had spine surgery in Jan 2017 and have crawled back to fine spine/backmuscle health.

This here is excellent advice from Dale, a fellow blogger and poet (http://koshtra.blogspot.com/) who works as a massage therapist:

". . . disks do not "slip." Spines are not fragile. They are incredibly tough structures that it generally takes enormous forces to injure. In the absence of obvious trauma what you've likely got is a pain problem, not a back problem."

I don't recall ever seeing the HMV store but I used to always go to a big Tower Records store near Piccadilly Circus. When I traveled to London in the 80's and early 90's, I loved shopping at that store and looking for artists I couldn't easily get in the states. I brought home mostly cassettes and CD's and I probably still have a couple of those CD's. I've kept a few for old times sake. I remember discovering Kate Bush on one of those trips and loving her Lionheart album. Thanks for the trip down memory lane!
I wonder if those boxes froze onto that guy's windshield.

I remember going to a music store in the 50's that had one or two small rooms where one could "audition" records. I spent a lot of time (and some money) there.

I love the neon sign, and I hardly ever do that...I've not purchased any music in ages...Your scan may be a good idea and a good PT can show you ways to move and relieve pain so that the problem is minimized...

I read ALL the Freddy books as a child -- he was a pig, right?

I can remember listening to records as a small child, and seeing that dog and gramophone logo, but no matter how hard I squint I can't "see" if it was on the record player or on the records themselves. *squints again* Nope.

YP: Yes, we talked about the benefit of exercises. I'm pretty active so I always thought my back would benefit from that, but maybe it needs some special attention. Hey now, don't insult the poor hog.

Vivian: Londoners seem completely ill-equipped to deal with ice and snow. I haven't seen big scrapers like we have in the USA, though admittedly I don't drive here and haven't been in many cars.

Ms Moon: We actually used to have a ceramic one in our living room!
http://shadowsteve.blogspot.co.uk/2011/05/nipper.html

Ellen: I haven't tried a chiropractor. I try to lift with my legs! This pain didn't seem related to strain or exertion, though.

Sabine: Yes, I've heard that too -- that our backs are incredibly strong by nature. I definitely DO have at least an intermittent pain problem, but I don't want to overstate the degree of pain. It's nothing like what some people experience. As I said, my range of motion is still good and I can pretty much do all the things I want to do. (At this point!)

Sharon: Yes, remember those days -- when buying CDs overseas meant getting something completely different from what you'd find at home?! I did that too!

Catalyst: It seems risky to let customers "borrow" a record for a listening session, given that they could be so easily scratched!

E: Isn't that a great sign?! I buy songs on iTunes every now and then, but I definitely don't buy music like I used to.

Elizabeth! Yes! Freddy was the "smallest and cleverest pig" from Bean Farm. Good memory! It was a charming book. I can see how that series might have had a following.

Jenny-O: Could have been either one, I suppose! I'm sure the logo was on RCA records. I seem to remember it there.