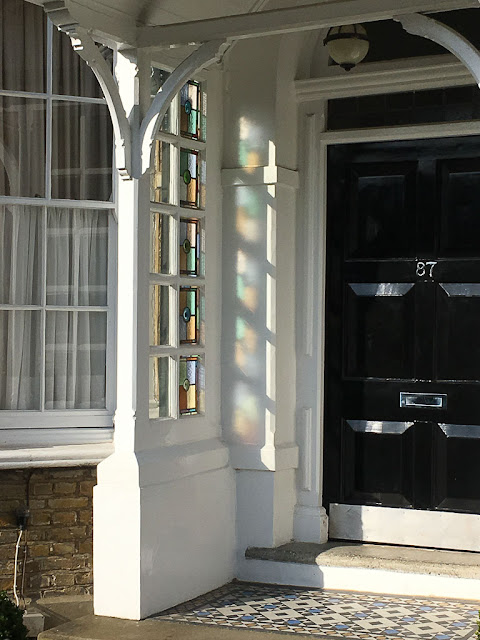 We had actual sunshine yesterday, which made my walk to work much more pleasant! The snow has all disappeared and the temperatures are back above freezing (although, at night, not by much). I moved the fig and the geraniums back outside. Fingers crossed, that's the last move of the season.

Something knocked Totoro off the Japanese maple in the back garden -- probably squirrels. He was lying on the ground when I went out yesterday afternoon to change the water in the birdbath, his string broken. So now, of all bizarre errands, I need to buy new string for Totoro.

First, though, we have to have our apartment inspected as part of our annual lease renewal process. The inspector for the managing agent is going to come tonight. It's mostly a formality, but it will be interesting to see whether the changes we've made (like painting and removing the shower door) register at all on the landlord's seismometer. If anything, she should be happy, right?

Remember that gold dental inlay I had removed when I had my root canal? Well, it's been sitting in an envelope on our bookcase waiting for me to get around to selling it for scrap. I'd planned to take it down to one of the gold dealers in Hatton Garden, London's jewelry district. But it only weighs about a gram and I think I stand to get about £10 for it, and I'd spend half of that on tube fare! So yesterday I found a place that buys gold by mail, and I threw it in an envelope and mailed it off. (Postage costs: 65p.) Frankly, I don't care if it's a scam and I never see a penny. It's just good to get it out of my hair -- or mouth, I should say.

Finally, as I was opening magazines yesterday at work, a packet of zinnia and cosmos seeds fell out of one of them. Which reminded me that I've got to do something about planting our stash of seeds! I have poppy seeds and hogweed and sweet peas, among others, that I gathered last autumn -- and now cosmos and zinnias, too. It's probably just a touch too cold to plant them now, but hopefully in a couple of weeks...
Posted by Steve Reed at 6:19 AM

I've got a couple of gold crowns, must remember them if I'm ever in need of urgent cash, lol. I had mine fitted on NHS years ago and I don't think they do them now unless you go private.
Tricky sewing seeds to time it right. We've had snow in April before now, better to wait than lose them all.
Briony
x

Re your photo....I adore the grand nature of that Edwardian door

The landlord's agent will probably charge you for the re-decoration as you hadn't acquired permission before embarking on this wilful scheme. Couldn't you have threaded the gold crown on a neck chain and given it to Dave as a birthday present?

I love the photo and hope the agent is pleased that you care enough to upkeep the place. Too many don't.

What a beautiful photograph. We got a foot of snow here on the north shore of Long Island yesterday. The champagne bottle that I put out in the backyard is completely covered. So it was like taking a little vacation into the sunshine to look at your photograph. It looks like something that Vermeer would have painted.

That door is beautiful.

I would consider it a good day if cosmos and zinnia seeds feel out of a magazine in my life! What fun.

Just the thought of cosmos seeds makes me happy. Ah, the colors of summer and the tall wispy flowers on a sunlit afternoon. Seeds and the promise of beauty.

I love this photo today! It looks so warm even though it probably wasn't when you took the photo.

I like the photo, too. Those black doors seem to be endemic to Britain.

I'm looking at the sidelight (or whatever you call the partial wall with the stained glass) beside the door and thinking how beautiful THAT is!

I aim to plant cosmos this year. My mother and I used to plant them when I was very very young, and I've never grown them myself even though I like them.

I hope you don't have to move your potted plants any more. Earth is heavy!

Get us some of that sunshine, please!! I have lost count of the times we moved the lemonds and figs in and out since the beginning of this year alone.

we have to plant sweet peas and poppies in the fall, December latest so you could probably go ahead and plant them. will it be the landlord(ess) making the inspection or an agent? we had exceptional weather this week.

Yes to what Collette said! Plant those lucky seeds!

Mike has had to schlep our geraniums in and out several times in the last month. He ordered some wildflower seeds online & the instructions said to plant them before the last frost, so we planted them the other day. Fingers crossed!