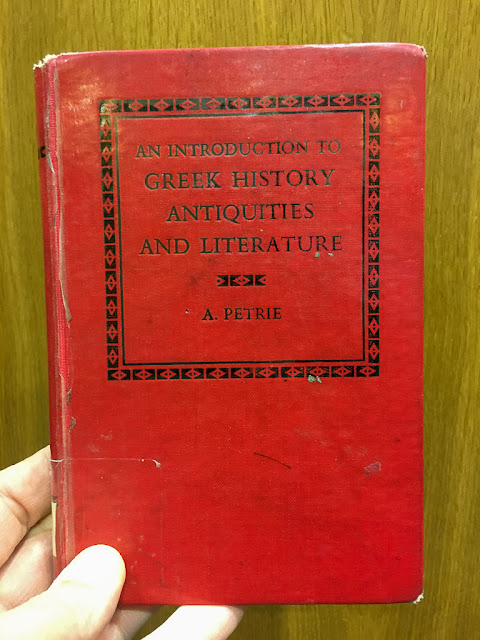 I've mentioned that I'm cleaning out and cataloging the books in our library conference room. They're housed in glass bookcases and, to be honest, mostly serve a decorative function. They're generally older volumes that were either donated to us or used to be in circulation and were discarded. (I think "Clarissa" may be going there shortly!)

No one ever reads these books. But we wanted to know what we had back there, and maybe make up a list, in case someone asks for something and it happens to be available there. We could then check it out to them.

(This begs the question, why don't we just put them all in the general catalog -- and I admit I've asked myself that!)

Anyway, this is a long lead-up to showing you this particular book, which I found yesterday. It spent a few decades in the collection, was last checked out in 1995, and then discarded and added to the conference room shelves, I suppose because of its rather antiquated appearance.

I found this note inside the back cover... 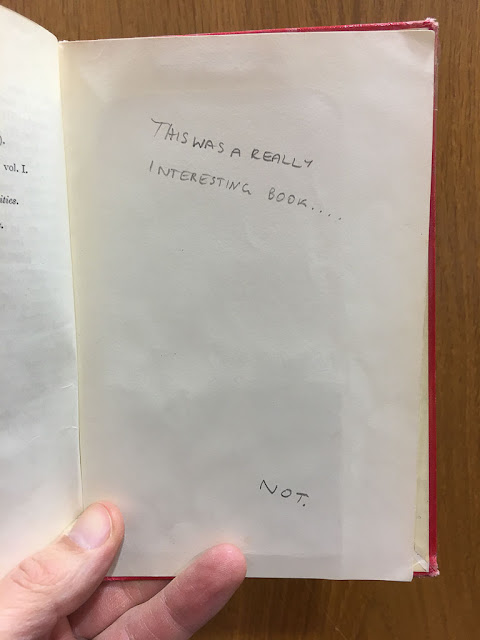 Everybody's a critic! I think this must have been written some time in the '90s, don't you? That seems like a very '90s speech pattern. (If you're really motivated to see for yourself how "interesting" the book is, there's a copy available on Amazon UK for just 42 pence!)

Most of what's in the conference room are old classics, many of them big Heritage Press editions with fancy covers -- the kinds of books that are designed to look good on bookcases. Curiously, a lot of them we don't have in the general collection -- Melville's "Typee" and "Omoo," for example, or Max Beerbohm's "Zuleika Dobson." So that's why a list will be good to have -- on the chance, however slim, that some future high school student shows up with a burning desire to read "Zuleika Dobson."

Hey, it could happen!

I've had lots of books that could have had that written in them, lol
Briony
x

"That was a really interesting book....NOT!" is such an ignorant thing to write and to have the gall to put this in a library book is despicable. Anybody with a keen interest in Ancient Greece would surely find fascinating bits of information in Petrie's book but I assume the commenter was more interested in Super Mario, Britney Spears and bubble gum. "That was a really intelligent student...NOT!"

I think that was pretty funny. And at least whoever wrote it, wrote it in pencil.
And it's probably true.

does anyone really read books older than a decade or two unless they are literature majors?

I like your conclusion! You get your point across. Seriously, what to do with older books is a nasty problem for librarians,.

Well this post sent me searching the internet. I recognized the name "Petrie" and went looking to see if it was the same person the University College Egyptian Museum is named for. It isn't. A little of over 10 years ago on one of my trips to London I was given a tour of University College and the Petrie Museum of Egyptian Archaeology. (It's a long story how that happened.) The museum, although tiny and cramped was literally overflowing with Egyptian artifacts. The museum is named for William Flinders Petrie, a British Egyptologist. The collection contains over 80,000 pieces is said to be the largest collection outside of Egypt. Even bigger than the British Museum's collection. Oh but, you should see it. It's nothing like the neatly arranged British Museum. It really is a jumble of bits and pieces. Seeing it was an experience I'll never forget.

As someone who once ran a bookstore, I can say there is no end to the curious habits of readers.

Now THERE's a book any university Classics Department would love to have in their library.

LOL, definitely the 90s! Your job sounds like a peaceful, contemplative kind of fun. I hope I'm right!

That is mild compared to what I found (artwork and writing, both) in an old school book of poetry I borrowed from my mother! I just hope she realizes when I return it that I'm not the one who did the scribbling :)

Briony: Me too! I sympathized with whoever wrote that!

YP: Well, I'd agree that one really SHOULDN'T write in a library book, but I thought that comment was pretty benign, YP! (And quite humorous!) I bet that IS an awfully dry book.

Ellen: Well, there are always the classics, and some people go for those. But all the in-between books of decades past are pretty much overlooked, I agree. Until I worked in the library I never realized how ephemeral books can be -- they seem so permanent.

Red: We donate them all to charity eventually. But yes, having them hang around in boxes is a pain!

Sharon: Interesting! I've never heard of that Petrie (wonder if he was a relative?!) or that museum. I'll have to check it out! London has so many weird little museums.

Catalyst: I've found lots of little notes written (or left loose in) books. They can be entertaining!

Colette: I wonder, though. Scholarship changes as the years go by, and even non-fiction books get dated after a while. I imagine there's been new work on ancient Greek culture that would be more up-to-date.

Jenny-O: Ha! Hopefully she figured that out. :)