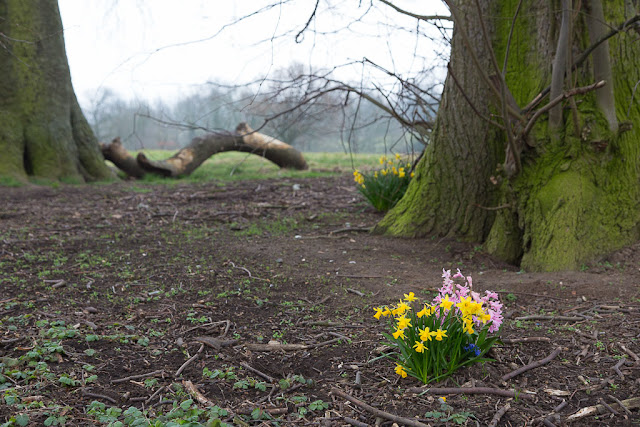 Olga and I found these bulbs sprouting on Hampstead Heath on Saturday. It's like someone planted a little spring bouquet -- a Hyacinth Bouquet! (Or Bucket?)

And how is it that hyacinths planted in the open in a park grow and bloom, while ours get devoured by pigeons? 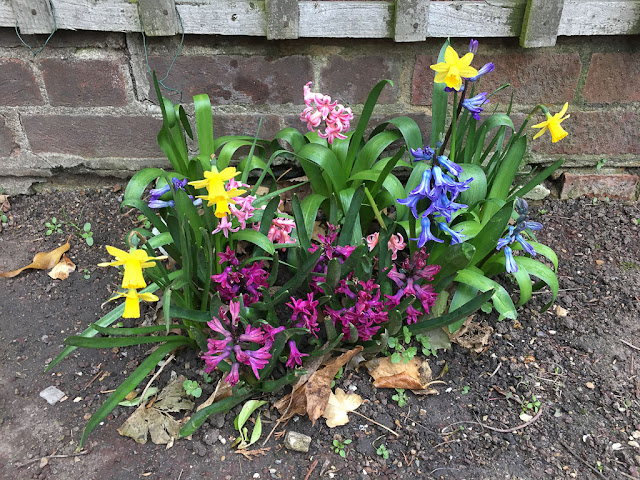 Here's another nice hyacinth-and-daffodil assortment, growing in a small patch of earth surrounded by a parking lot. Someone definitely made creative use of bulbs in this tiny space. 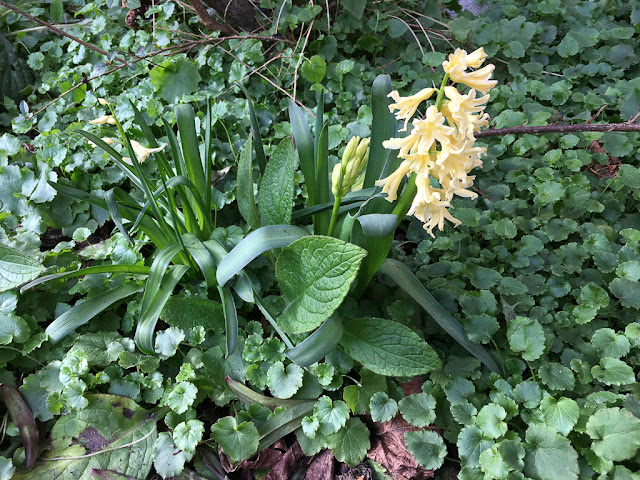 Finally, just to show you that we're not complete losers in the bulb department, these hyacinths are growing outside our front door. They're the ones given to us by our friends Adam and Tim a couple of years ago. Pests don't bother our front garden nearly as much as the back -- I guess commotion in the street and the fact that it's a much smaller space keep them away.

Dave and I worked in the garden a bit on Monday -- we trimmed away some dead stuff, pruned our gangly geraniums and planted some seeds that I'd been saving in envelopes all winter. Some were poppy seeds collected from the purple opium poppies that Mrs. Kravitz grows next door, and some were hogweed seeds from Hampstead Heath. I've always wanted to have some tall, dramatic hogweed plants in the garden.

(I'm not talking about giant hogweed, which is a whole different matter -- those plants are certainly dramatic but they're also apparently dangerous and invasive. This page explains the difference between the two.)

Anyway, I have no idea whether any of these seeds will grow but I'm giving it a whirl. And we have more seeds still to get in the ground, including some sweet peas I picked from our vines last year. I gotta get moving on those.

We got a nice surprise when our council tax statement arrived the other day. Apparently we've overpaid somewhere along the line, and we don't owe any payments until September! How this is possible I'm not sure, especially when our monthly bill (£215) is more than we've been paying each month (£199). (When we first moved in here, almost four years ago, I set our bank account to make regular payments and never adjusted it, so apparently the tax increased at some point.) A co-worker told me that council tax, which goes to fund municipal services like trash collection, is only paid ten or eleven months of the year -- so maybe that's where we went wrong. We've paid every month. Anyway, as I said, it's a nice surprise.

Last night Dave and I went to a book-launching party for an acquaintance who's written a new novel. I bought a copy for the library, since she's affiliated with the school, but apparently the book is quite salacious so it may not be appropriate for student reading! I read some of the sexier parts of it to Dave last night after we got home, just for laughs -- it is definitely graphic. I hope, for our friend's sake, that it sells a million copies!
Posted by Steve Reed at 7:23 AM