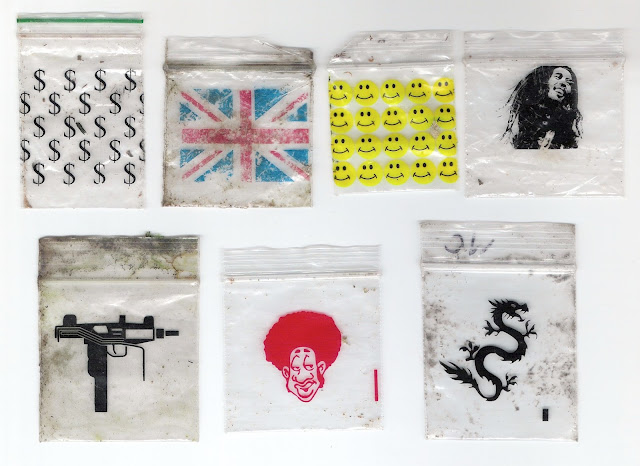 Several months ago I read an article about a photographer who has made a project out of collecting empty drug bags in London. The bags -- little plastic zip-locks featuring simple designs -- are used by dealers and consumers of marijuana and other drugs. They can easily be found lying around on London's streets and in its parks and public spaces.

The photographer, Dan Giannopoulos, not only collects the bags -- he maps his finds and relates them to certain neighborhoods.

I found it all pretty interesting, especially since I've been known to pick up an odd drug bag here and there. Above are some examples I've found during my walks around London. It's not the drugs that interest me -- it's been more than two decades since I've had any pot and I've never tried anything stronger -- but rather the artwork.

For a long time I resisted collecting them, choosing to simply photograph them instead. But after I saw a collage of Giannopoulos' found bags, I couldn't resist making a much smaller version of my own. I'm not sure I'll do anything with them. Dave might not be amused if I were to frame them and hang them up in the house!

On a completely different note, I planted our sweet pea seeds yesterday, so that's one more spring task completed. I still need to repot some plants and clear a flower bed in the back corner of the garden -- we're going to plant some wildflowers back there for the bees. There's more trimming and pruning to be done, and -- well -- it never ends, does it? Fortunately Spring Break begins tomorrow, so I'll have more time to take care of some of these tasks!

Our amaryllis bulbs have all sprouted, but for some reason there are no flower buds this year. It's the strangest thing -- the first time that's happened. Maybe they're still to come.
Posted by Steve Reed at 6:40 AM

Drug bags? Well. I'be tempted to say "now I've seen everything" but of course I haven't.
No. Gardening never ends. Ever. Which is sort of the point, I guess.

Yo would never, ever find a drug bag in America with the English pound sign on it because I doubt that two in ten Americans could identify it as such. But the dollar sign? Must be a universal symbol thesis days for something, but I hate to think what.

I've never heard of "drug bags"-- makes me wonder about drug laws there, and in particular marijuana laws. I haven't smoked pot in more than 40 years, but I do live in the pot capitol of California!
https://www.washingtonpost.com/news/national/wp/2018/03/16/feature/californias-outlaw-marijuana-culture-faces-a-harsh-reckoning-legal-weed/?utm_term=.b242aea3e368

I never heard of decorating drug bags. That just seems so commercial. I agree that the work both inside the house and outside the house just never ends. When I lived in the house on the west side of town, I had a gardener come once a week and every single week, he'd be there close to two hours. And, when the three mesquite trees in my back yard started dropping their seed pods, I'd be out there every day cleaning them up.

what fancy drug bags! who knew?

Gah, Steve - where I live we call those crafting bags! Good for packaging small items of jewellery, etc.! They aren't decorated, though. I'll never think of them the same way again.

I don't think I'd want to handle those, not around here at least. Fentanyl has become a problem in Canada, and it takes very little of it to cause problems. You never know what's been in one of those bags!

Yup, drug bags are new to me too.

YP: That's EXACTLY what it's going to be like. A buffet!

Ms Moon: I know! I never knew they were a thing either, until I started finding them here. Maybe they're just a London thing.

Robin: I think in your area it's sold in bales, not bags!

Sharon: It's amazing how much there always is to do. If we owned the complete house (as opposed to just renting the downstairs) I can't imagine what we'd be contending with!

Jenny-O: Fortunately, opioid use in England is not at all what it is in the USA, and I haven't heard of Fentanyl as a street drug here. But yeah, I take your point! I clean off the exterior and never handle the interior.

Catalyst: We all learn from each other in blogland! :)