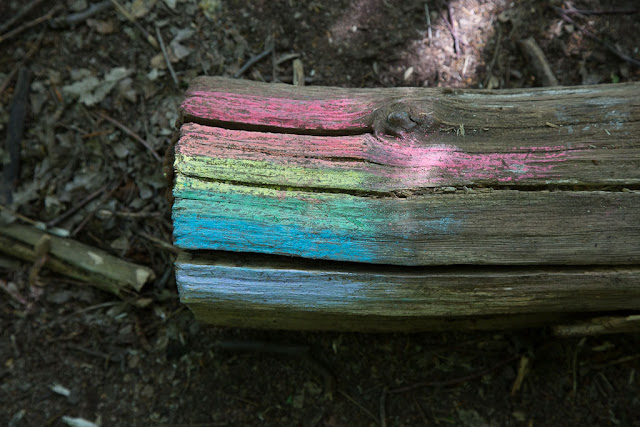 My story today is not for the squeamish. Musophobes and PETA members, look away now.

Several weeks ago, I began hearing scratching behind the wall or floorboards beside my bed. I assumed it was coming from outside, where we have some potted plants -- maybe squirrels were jumping around out there. But then, last week, while weeding the patio, I found a small hole in the exterior wall. The bricks had aged and apparently partly crumbled away next to an air vent leading to the crawl space beneath the house.

I knew something was living in there, so I set up my garden camera one night. In the morning, here's the image we saw: 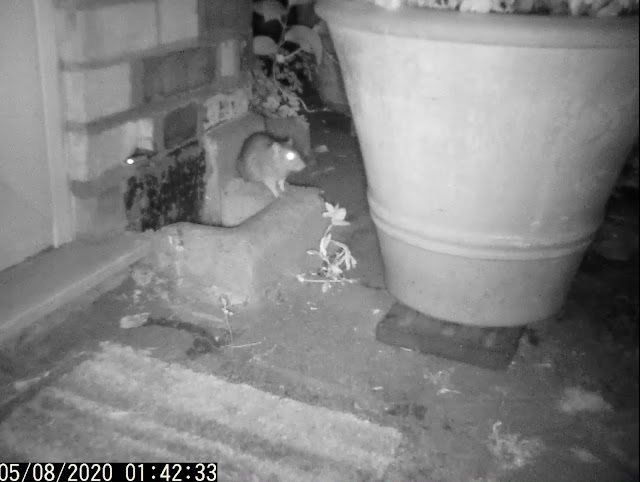 Yep. Not mice, not squirrels, but plain old urban rats. Two of them. One would stay in the hole, and the other would run out and find things in the garden -- earthworms seemed to be a favorite -- and bring them back to the nest. (I actually have a five-minute video, but I'll spare you.)

This shouldn't have surprised me. You may remember we've occasionally had what we believed to be mice -- this is an old house with lots of nooks and crannies -- and I photographed a rat on our bird feeder last year. But I thought they were living outdoors, in the garden.

Coincidentally, that evening, Dave was making dinner and planned to use a small bag of baby potatoes I'd bought that week at the grocery store. He opened the pantry to find an empty, gnawed bag, all ten or twelve little potatoes gone!

So not only were the rats in the house, they were in the kitchen. And we can't have that. I am an animal lover through and through, but I have my limits. That's a health risk to us. The rats had signed their death warrant.

We decided to call an exterminator, and found one who advertised humane trapping -- for an extra charge, they said, they'd take the animal to a "rural area" and release it. We thought this was kind of funny -- they probably just take it out to the van and club it over the head -- but I was adamant that I did not want poison. I was afraid dying rats would escape into the garden and get eaten by something else, contaminating the food chain and killing a predator like a fox or owl. So we called them.

Unfortunately, all this unfolded on Friday, which was a holiday. By the time midday Monday came around Dave still hadn't heard back from them, and I'd gone to work. Dave, feeling the situation was urgent, called another exterminator -- a much more traditional one. He came right away and spread poison in the rat hole and under the cabinets in the kitchen. He blocked the hole so the animals couldn't get back outside.

He told Dave that he believed the bird feeders were our problem, and recommended we remove them.

Unfortunately, this has created a complete nightmare for me. For two nights now, I've heard the rats trying to get out of the hole, and I am sick about what we are doing to them. I'm completely torn up about it. Last night I seriously considered opening the hole just to get their frantic gnawing noises to stop, but I didn't because I knew they'd probably already eaten some of the poison and would potentially take it out into the wider world. We're now committed to our course and have to just stick with it.

In retrospect, I wish we'd just bought big ol' snap traps and handled the problem ourselves. I think we only have a couple of rats, not a serious infestation, and at least with a snap trap death is immediate. Apparently these poisons take days, and then they're lying around under the house (with the dead animals) forever afterwards. This is EXACTLY THE SITUATION I DID NOT WANT!

So I'm not sleeping, and I'm wrestling with all kinds of horrifying images and feelings. It's not Dave's fault, really -- he just wanted to solve the problem and he is far less conflicted about it than I am. ("I have opposable thumbs," he says.) I'm not sure he understands my reaction, and honestly, it probably is silly and self-indulgent to be so upset.

For what it's worth, the experts say humanely trapped rodents that are released elsewhere rarely survive anyway. I may go buy some big snap traps today in an effort to get the job done faster. And once these rats are gone, I'm considering picking up and disposing of all that poison, or at least as much of it as I can collect. I believe the council will take it as hazardous waste.

Meanwhile, we're communicating with the maintenance company to get the hole permanently fixed.

I'm sorry I've inflicted all this on you, but I had to tell the tale and get it off my chest.

(Top photo: Some chalk art on a log at Hampstead Heath.)
Posted by Steve Reed at 7:23 AM