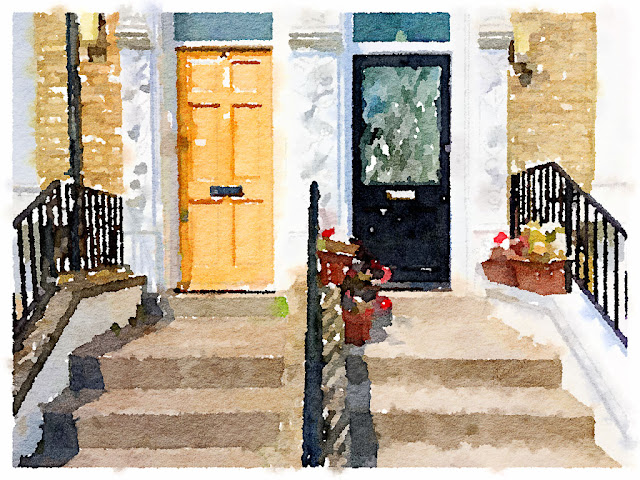 Olga was bursting with energy yesterday. She took me to the cemetery in the early morning, which we never do. It was a great time to go because we were virtually the only people there. Then, after I spent several hours doing some minor gardening and finishing my latest Tana French novel, she was quivering again, barely able to contain her excitement that midday walk-time was near.

I think this is because she spent the week with Dave, who doesn't typically walk her. (Especially now that he's isolating at home, being vulnerable to coronavirus.) She'd built up a reserve of unreleased energy.

So we went on our West Heath walk, where we had two funny encounters. As we walked down a dirt road through the forest, I looked up a hill to the right and saw a man kneeling on a footpath. He appeared to be struggling to stand. "Are you OK?" I called to him -- wondering how I could help him while still staying socially distant. He had evidently been tripped by vegetation. 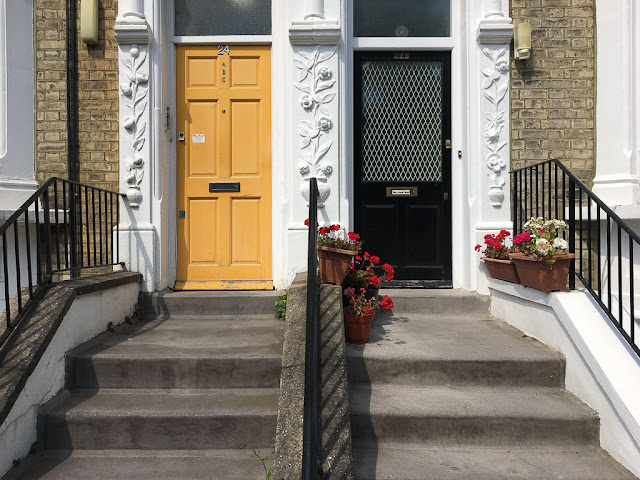 Later on, a woman passed us walking her own dog. Not quite looking at me, she said, "Blah blah blah blah full blah blah."

I thought, "Is she talking to me?" By this time she'd passed me so I turned around and she turned back and said, more clearly this time, "There's a poo bin over there, but it's usually full." She pointed to the left.

Only then did I realize that Olga's Kong toy, which I was carrying in a green plastic dog poo bag, looked like a massive turd worthy of a Great Dane. 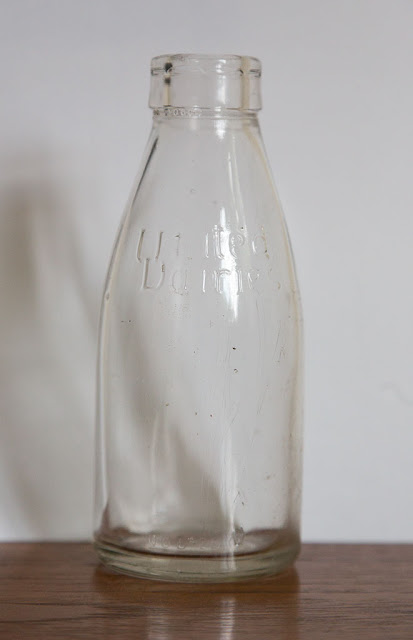 While on the West Heath I found another old milk bottle. Only an edge of the bottom was protruding from the path, so I began scratching around it with my house key -- a laborious process, to say the least, because the dry ground was hard as a rock. Eventually this emerged -- a small, heavyish bottle labeled United Dairies.

United Dairies hasn't been around since 1959, when it merged with another firm to form Unigate. Pretty cool, huh? It has been added to the windowsill.

Dave and I are watching an excellent series on Amazon called 'Tales from the Loop." It's very strange -- kind of retro but also otherworldly, a little like "Stranger Things." We really like it.

Every once in a while I think I'm getting a whiff of rat, but I might be making it up.

(Top photos: Neighborhood doors, both the original photo and the Waterlogue version.)
Posted by Steve Reed at 6:50 AM

The milk bottle was another great find but I was slightly worried about you damaging your house key. You may be a librarian and a former journalist who has read hundreds of intellectually challenging books and receives "The New Yorker" via subscription but keys are not made for digging with!

That bottle collection is wonderful. Always a new treasure. All I can find here is sea glass, and not much of that lately. And shells, but I reached my limit when I was growing up... OK, except for the mother-of-pearl, translucent ones.. which I've barely seen at all lately.

Great bottle. And you will know it when you get a whiff of rat, eau d'ro!

Good to have a shared laugh..and another good find!

Yes, the whiff of rat..not good. The spray used to hide rat whiff by the Rat Man was rather sickly..I was glad when both had gone!

You, like Bramble Man, need to start carrying a pocket knife. My grandfather believed that everyone should have a pocket knife with them at all times for things just like scraping a bottle out of the hard dirt! Or freeing oneself from brambles.
Love the milk bottle.

In the 1950s, we used to get our milk delivered in those kind of bottles--by uniformed driver on a horse drawn cart at my aunt's home and mostly on an electric milk float where we lived. The type of milk in the bottle was identified by the colour of the foil cap. Easy to tell whole milk as you could see the layer of cream at the top--just had to shake it up before pouring it in a glass. You placed empty bottles by the front door in the early morning and left a note sticking out of the top of one if you wanted other things besides your usual order. In my mind, I can still hear the rattle of the bottles in their metal racks as the float made its way down the street.

And some strangers are strange. Usually these people end up being somewhat interesting as in the two people you met.

cool bottle! Funny poo bag story. We always carry pocket knives, have done so since we were kids. They are just so handy for all sorts- I suppose a key does the job just as well BUT if you were kidnapped and had to cut yourself free, I don't know...
As Covid19 goes I see that there are fools in Hyde park protesting their right to die...how dumb! The watercolour ap is really cool- who needs a brush?

responding to all the comments. I used to always carry a little pocket knife and eventually everyone got lost. now that I think about it, I can't remember when I stopped replacing them. funny that Olga took you to the cemetery when she seemed so bored with it earlier. and yeah, another cool bottle.

That was such a funny encounter with the woman. I love the photos of the doors, especially the watercolor one. You have a super day, hugs, Edna B.

Another great find out on the Heath. Love that watercolor version of your photo. That is the coolest app.

What a lovely find! Love the doors too. At least that woman did not cough or sneeze on you...

We watched Michelle Obama's film of her book tour on Netflix yesterday. More and more I am impressed with her.

As for that rat smell, perhaps you're obsessing? Just sayin'.

Thank you for the laugh about the Kong! That bottle looks the size of the ones we used to get cream in, way back in dino times. Quart of milk, pint of cream, you know :)

Sorry I could not read your rat post. Thank you for the warning at the beginning of it. I'm feeling unusually fragile these days and just couldn't. But I do commiserate, whatever the details were.

I love the door "painting" and photo!

I have not read your rat post, and I think I will not scroll down to find it. I hope you don't mind!

Unfortunately you're probably not imagining anything. I've heard rats are notoriously difficult to get rid of. Best of luck! -Kate

Olga took you to the cemetary. How did this happen? You walked out the door and let her take the lead. You should do that more often, who knows where you might finish up.
About the book,I'm chasing it down, this may take a little while.
Alphie

YP: Actually, the key is fine, but I kind of scratched the bottle, which I'm annoyed at myself about.

Mitchell: I was a serious shell collector as a kid, cataloging and identifying them all. Now I only have a few special ones, and that's fine with me!

Peter: Eau d'Ro! I love that! Thanks for the laugh.

GZ: Yeah, deodorizers are sometimes worse than the original odor!

Ms Moon: You know, I had a pocket knife in the Peace Corps, and that may be the only time in my life when I've used one!

Mary: What a great memory! Thanks for the detailed description. Like a snapshot in time.

Red: Usually I avoid talking to strangers but almost invariably when I do I enjoy it.

Linda Sue: Yeah, I didn't pay much attention to that demonstration in Hyde Park, but I saw that Jeremy Corbyn's brother got arrested!

Ellen: She hadn't been in about a week, so I guess her boredom wore off!

Edna: It was funny!

Sharon: I liked it too! I wasn't even going to post the original, but the watercolor didn't really show the ornate decorations at the side of the doors, and that's why I took the picture in the first place.

E: No, she stayed distant and was clearly very concerned with hygiene, LOL!

Jenny-O: Don't worry! I put that warning there expressly because it was so bleak.

Elizabeth: I probably wouldn't read it either, LOL!

Blondi: I know people always say if you see one you probably have ten (or a hundred), but I really think we only had the pair. Fingers crossed!

Alphie: That's EXACTLY what happened! I let her lead me occasionally. Those walks are always an adventure but they usually focus on the best local garbage cans.

Steve I am the 1959 edition lol. I am so glad that bottle made it to the window sill. Oh and the Kong story was just too funny. My cisco has a Kong and we filledit with all kinds of treats. He especially loved peanut butter. I don't know what ever happened to it. I am hoping it is packed in a box somewhere. I would never have thrown it away.
I really love your photos. They are both beautiful and Bright.
I really hope that Dave is doing alright self isolating. Big hugs to the three of you!!! Of course I have to hug Olga. From this distance I think all is safe :)