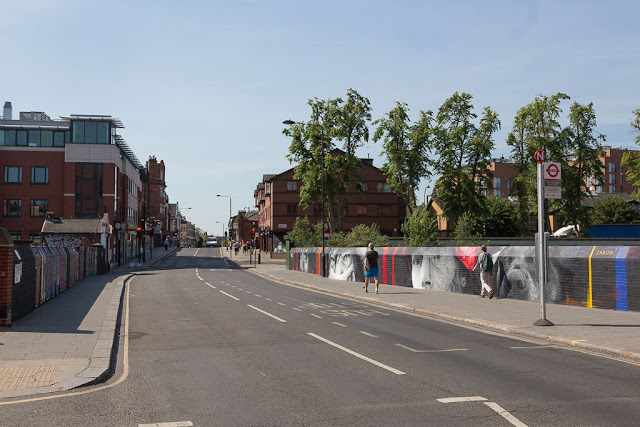 I mentioned a couple of days ago that we're getting some new murals in West Hampstead, on the bridge over the railroad tracks. Well, they're finished now, and they're beautiful!

On the right side in the photo above are portraits by artist Zabou, including... 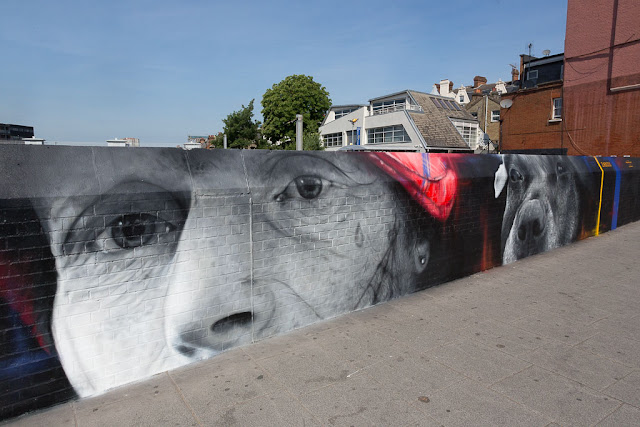 ...John, our late used book vendor, and his dog Sugar. This is where they used to sit every day as John sold his books. I photographed them here a couple of times. You may remember John died last May, not too many months after Sugar.

I love the portraits, and I can't help but wonder what John would think if he could see them. When I gave him copies of the photos I'd taken, he said they were "pukka" or "a bonzer" -- but obviously these murals are on a whole different scale. They'd blow his mind. 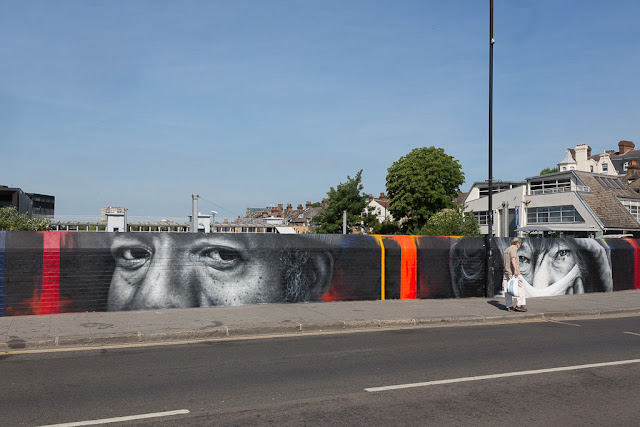 Zabou also painted portraits of David and Amy. I don't know the backstory on these two, but the mural is supposedly meant to raise awareness of homelessness and the issues that homeless people face. So maybe they're somehow associated with that purpose. Amy's even got her coronavirus mask on, it looks like! 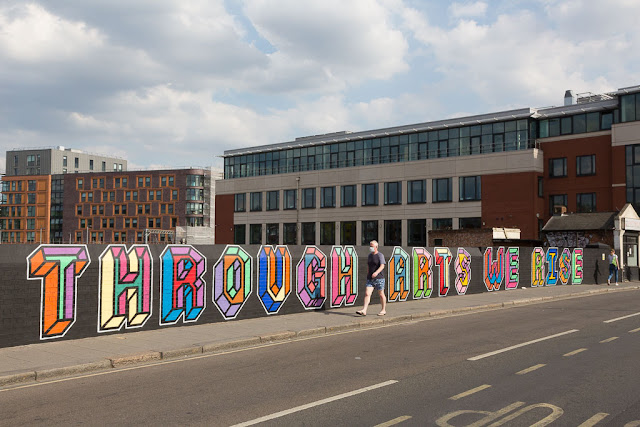 On the other side of the bridge are these words, which is the name of the project. The organizers are crowdfunding to help pay for the artists and their materials. I gave them a donation. I think these murals are a huge boost for the community.

In other news, I have to take a moment to mark the death of Larry Kramer. He was a giant in gay and AIDS activism when I was young, a guy who helped all of us find our voice and use it against the injustices of society and the government. To be honest, he always scared me a little -- he burned so fiercely with righteous anger.

When I saw a revival of his classic play "The Normal Heart" in New York, in 2004, I wrote this in my journal: "I'm kind of embarrassed to say I didn't like it -- in the gay world, that's a little like saying you don't like the Bible. But I don't go for Larry Kramer's brand of delivering a message -- all the anger, the yelling. I understand the source, but at this point it all seems somewhat dated. And I know it's dated partly because all that anger wrought change -- but Jesus, it's exhausting, being yelled at for 2 1/2 hours."