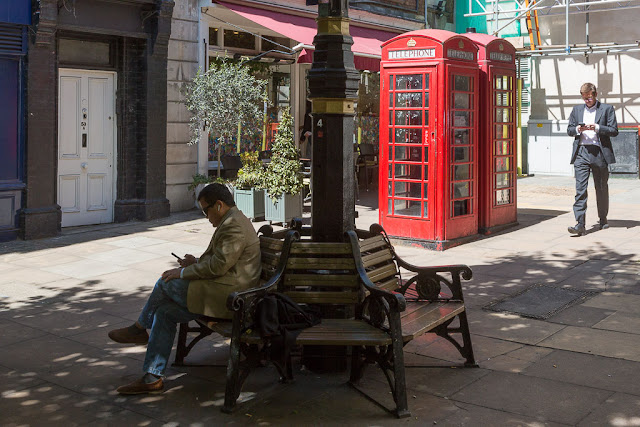 Well, we are a barrel of laughs around here.

Remember that surprise birthday party we went to on Saturday, where the guest of honor was sick? Well, I think I've come down with whatever she had.

I felt OK when I first got up yesterday morning, but then, while walking the dog, I felt my stomach do a little flip that definitely didn't seem right. I ate breakfast and walked to work as usual, but by the time I got there, I was feeling tingly and achy, and it just got worse and worse. Finally, at the demand of my co-workers, I went home just before lunchtime. I spent yesterday afternoon inert on the couch with a fever that reached almost 102º F.

Of course, I have no way of knowing whether this is due to the surprise party. It might be something totally unrelated. Maybe I would have gotten sick anyway.

To make things even more interesting, Dave started feeling ill on Sunday night -- more of his Crohn's-related intestinal complaints, or so we think. So we're both flat-out on our backs and staying home from work.

Even Olga is sick! I think she ate sticks on her walk yesterday. Her belly is gurgling away. We're a mess!

In other news, as I was walking along Abbey Road yesterday morning, I passed a trash bin outside an apartment complex that was smoking. It looked to me like a cardboard box in the bin was doing a slow burn. No one was around, so I wasn't sure what to do. It looked like a very minor fire, but I didn't want to leave it entirely unchecked. So I called the Fire Department and reported it. The dispatcher said they'd check it out, and I didn't wait around to see what happened. 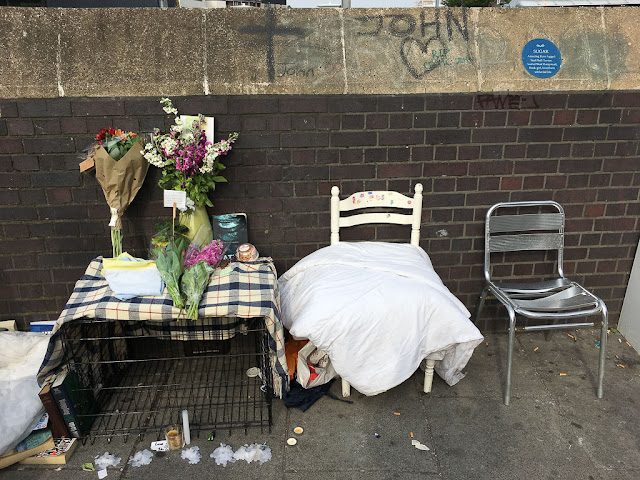 I was shocked to learn that John, the guy who sells books outside the Thameslink train station in West Hampstead, apparently died on Sunday morning. There's an article in the paper about him -- no cause was specified but it's not thought to have been suspicious.

It must have happened very suddenly -- his stall is still set up, where people have left flowers and candles in memoriam.

I photographed John a couple of times and he was always a friendly guy. Now, at least, he has joined his beloved three-legged dog Sugar, who died last year and who has her own memorial plaque above his book stall.

John was a nice guy, but he'd obviously lived a rough life. I usually waved to him across the street while walking to the tube, and I sometimes stopped and bought a book or gave him a bit of money. (He'd ask if he was really broke.) I confess I also avoided looking his way occasionally, because I didn't want to give him something every time. Which was probably a shitty thing to do. After Sugar died, he gave me her leash and collar for Olga.

Once he passed me on the street and called out "Monsieur! Monsieur!" I thought, "Does John think I'm French?!" Maybe my American accent was as bewildering to him as his Glaswegian was to me. Anyway, West Hampstead won't seem the same without John, a true local character.

(Top photo: A quiet square in Mayfair.)
Posted by Steve Reed at 7:17 AM