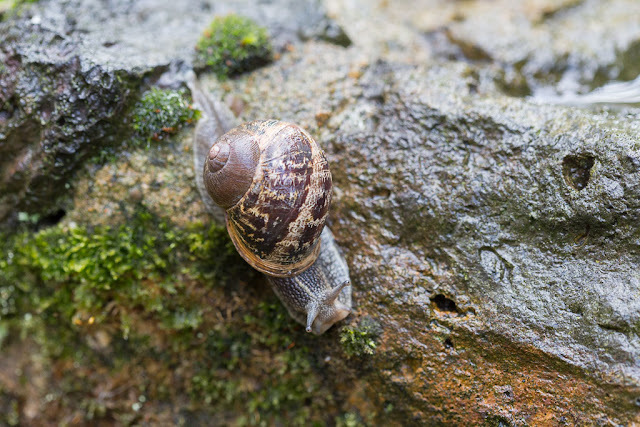 Yesterday evening, just as I was coming home from work, we had some rain -- real rain, not just misty dampness. It's been weeks since we've experienced rain like that, and Dave and I were happy to have it. After I got home we stood at the back door and listened to it falling in the garden. I imagined all the plants sighing.

Within half an hour, the snails were out and about. 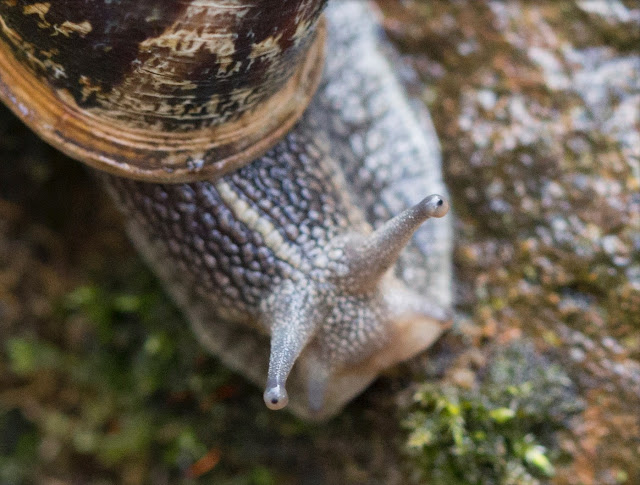 I was going to caption this, "a face only a mother could love" -- but its mother probably laid thousands of eggs and never met any of her children, much less loved them. It's lonely being a snail mom.

Here's what I discovered yesterday about snails: Looking closely at those little eye stalks, which seem so ineffective, I couldn't help wondering if they could really see much. Well, it turns out that some of their eyes (depending on the species) have lenses, so not only can they see, but they can see images and objects, as opposed to just light and dark. Apparently they can't focus, though, and they don't see colors.

Don't say you never learned anything from my blog.

Of course I read up on snail eyes via Google. Here's something else, on a completely unrelated topic, that I discovered via the miracle of the Interwebs:

I've written in the past about my appreciation for the poet Diane Wakoski. For many years I've had a book of Wakoski's containing a poem called "The Story of Richard Maxfield." Maxfield was a composer of experimental electronic music in the '50s and '60s who committed suicide in 1969. Wakoski wrote a few years later about his life, his death and his music, particularly a piece called "Cough Music" made up of the sounds of people coughing at concerts.

It's been almost 35 years since I first read her poem, and I've always wondered about "Cough Music." Of course, hearing a Richard Maxfield piece decades ago was no easy matter. But it recently occurred to me to look online and see if "Cough Music" was available. Et voila!

It sounds nothing like I thought it would. In fact, it doesn't even really sound like coughing -- more like a recording of seals barking in a storm drain, played backwards. (I think there's a lot of tape distortion -- Maxfield's "Night Music" is much clearer and more interesting.) But I never imagined I'd be able to hear "Cough Music" at all, and even though I wouldn't say I'm a fan, thanks to the Interwebs for satisfying my curiosity!
Posted by Steve Reed at 6:04 AM