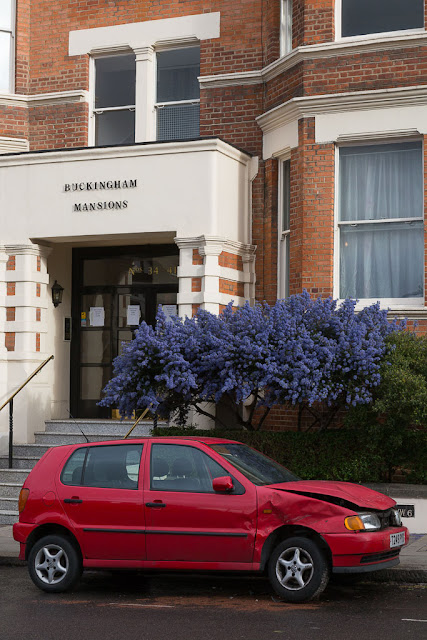 The other day I was walking Olga (I know, I know -- ALL my posts begin that way) when I came across some damaged cars at the end of our street. They were parked against the curb, and I saw one of the owners -- a neighbor of ours -- standing over them. I asked him what happened. Turns out someone rounded the corner at 3 a.m. going too fast, lost control and slammed into two parked vehicles. Yikes! Somehow Dave and I slept through it.

My neighbor said the driver insisted that his steering had failed. Yeah, right! With the help of a half-dozen vodka tonics!

Anyway, he said he collected insurance information from the guy, as did the owner of the other damaged car. I'm unclear on whether or not the police showed up.

That's pretty much the only drama we've had around here. I've been doing inventory in the library, which means I've been working on scanning every single one of our 27,000 or so books. It's an annual ritual, to assess what's gone missing during the previous year. (There's always something. Usually several somethings.) It's kind of fun -- I can daydream and at the same time I have the satisfaction of occasionally correcting a problem. So far I've found one book that wasn't in our catalog at all, even though it had a bar code (it probably got deleted by accident at some point), and another that belongs in the library downstairs for the little kids. My need to organize is indulged! 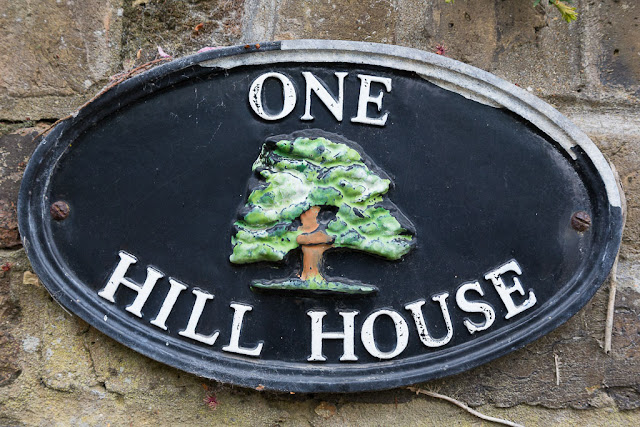 This is a plaque on a house gate in Hampstead. I've been walking past it for years, thinking, "I should take a picture of that." So on Sunday I finally did. I've always liked that tree. Do you suppose the owners named the house after the creepy mansion in the Shirley Jackson book?

We're continuing to chafe under the tyranny of the squirrels. They upended one of my burdock seedlings and dug up one of my dahlias. I think both plants will survive, but I swear, every day, it's something. On the bright side, I'm pretty sure I saw starlings eating slugs on the lawn!

Dave and I watched "The Ten Commandments," the old Charlton Heston movie, over two nights this week. Dave loves that movie. Believe it or not, I don't think I'd ever seen it. Anyway, Dave always says he doesn't appreciate camp, but as I watched the glowering Yul Brynner and the floridly dramatic Ann Baxter sweep through scenes in all their tinkling Egyptian metalwear, I said to him, "You don't think this is campy?" Seriously, it's over the top. It probably won't surprise you to hear that I got a huge kick out of it.
Posted by Steve Reed at 6:13 AM