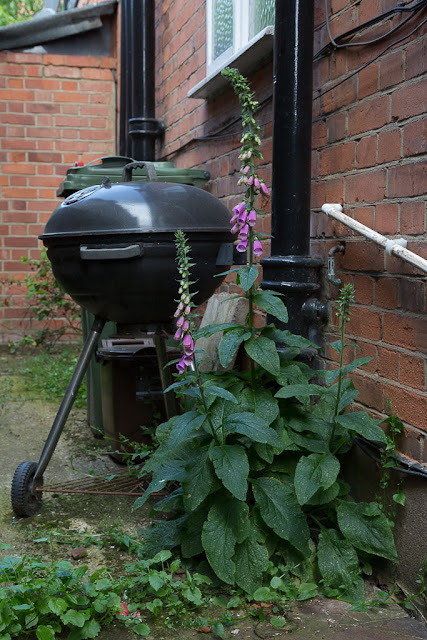 The other day I walked up the alley next to our house and found the wild foxglove in fine form, next to our unused barbecue grill and some extra rubbish bins. We almost never even enter this part of the yard, so it's always a special surprise to find such a beautiful plant, growing all on its own. There's barely any soil -- just a crack in the pavement -- but a foxglove has appeared here almost every year since we moved in.

It's only Thursday, and I didn't even work Monday, but this already feels like the longest week in the year. At work, literally everything is making me cranky.

For one thing, all the kids are doing projects and papers and they're coming in a steady stream to my desk to borrow computer chargers. The monotony of checking out computer chargers makes me crazy. I really can't explain why, but it does. Sometimes the same kids come back twice in one day, and I have to bite my tongue to keep from challenging them about whether they really need to charge their computer again so soon and WHY DON'T THEY JUST BRING THEIR OWN CHARGER TO SCHOOL?!?!

I realize this is completely irrational because I'm paid to check out chargers along with books. Chargers are just so boring, and because the kids can't keep them out overnight, there's a lot of churn. And I suppose, to me, they seem symptomatic of the younger generation's sad technology dependence and obsession.

It's also the time of year when I'm trying to get all our materials back, and this always seems like a Herculean task. I've set the computer to send daily e-mails about overdue books -- and pretty much everything is overdue at this point -- but a lot of students don't even read their e-mail. So I also have to lock down everyone's library account -- no summer checkouts until they've brought back their stuff. Coercion, basically. (We don't charge overdue fees.)

The fifth and sixth graders are away on school trips, so yesterday I combed through their classrooms and lockers and I found four armloads of books, all overdue. One of them was months overdue, and had been the subject of discussion between me and the kid in question. WHY ON EARTH, if it was in his locker, DIDN'T HE JUST BRING IT BACK TO ME RIGHT AWAY?!?! 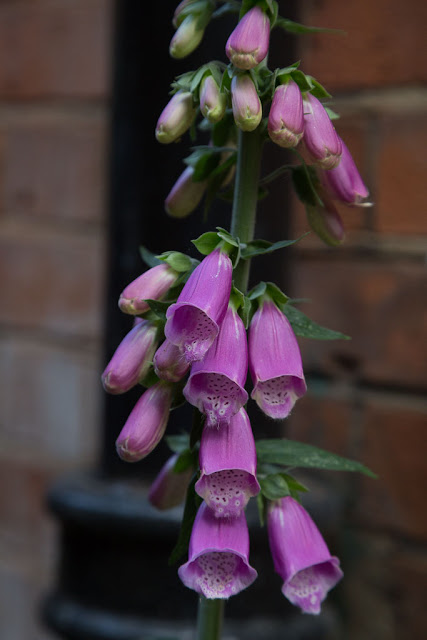 Another kid still has a book that was due in January. He doesn't know where it is. His account has been suspended for months and I have been in back-and-forth communication with the parents to get the problem resolved. Problem is, nothing happens. I suspect the parents are trying to get him to pay for it himself, but honestly, I just need a solution. I am running out of time.

I've said it before, and I'll say it again -- librarians have a reputation for being cranky, and I completely understand why. It's because people just don't do what they're supposed to do. Perhaps it's quixotic to even expect it. Humans are messy by nature.

On the plus side, I had a high schooler come to me yesterday looking for book recommendations for summer reading. That almost never happens. He went away with four books, a few classics and a few lighter reads, and that made me feel helpful, at least.
Posted by Steve Reed at 6:30 AM