There Goes a Tenner 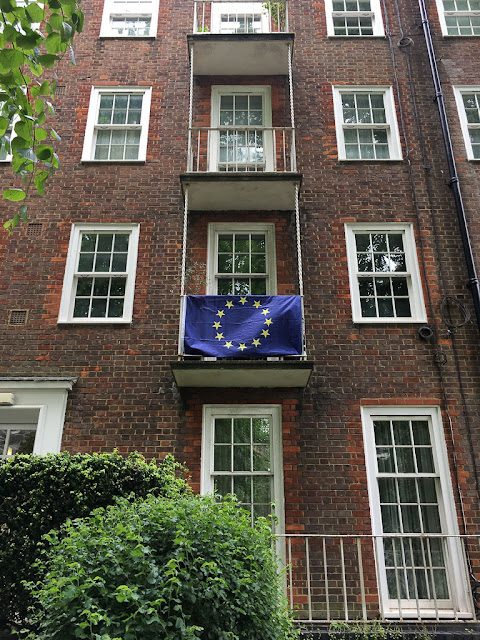 I took Olga to the Heath yesterday. I can definitely tell she's getting older. Not too many years ago she would drag me there. I could barely walk through the streets of Hampstead fast enough to keep up with her. Now she takes her time, sniffing all along the way, and her stamina isn't what it was. I shortened the walk a bit yesterday, spending more time in the woods (which she loves because that's where the squirrels are) and skipping Parliament Hill and some of the more open spaces. She didn't seem to mind at all.

This may be the new normal. She was two or three years old when we got her at the beginning of 2013, so now she's at least eight. Time waits for no staffy.

We saw this European Union flag flying from someone's balcony in Hampstead -- a little pro-EU message as Britain heads into European elections. Why are we having EU elections, you may ask, when we're about to leave the EU? A valid question. Basically it was a requirement for staying in a little longer to get our ducks in a row before we depart. (I say "our" even though I personally can't vote here in the UK -- not yet, anyway.)

It seems the danger in these elections is that voters may send a bunch of far-right politicians to the European Parliament, politicians who are openly hostile to the EU, thereby continuing to dismantle it from within. Britain is certainly guilty of that, having sent Nigel Farage back time and again. God forbid we should actually try to make the system work. I'm sure Russia has its sticky fingers in these races. 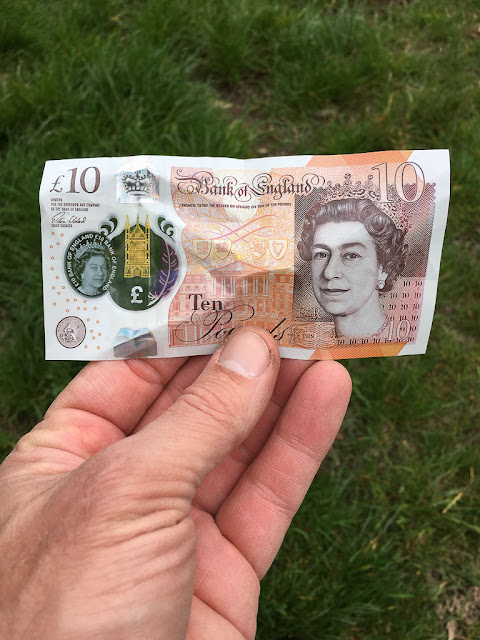 But on a positive note, look at what I found lying on the ground on the Heath! Now that's a good day.

It reminded me of the Kate Bush song "There Goes a Tenner," about a gaggle of criminals blowing up a safe. The crime goes wrong and money is left scattered at the scene.

I planted a few more seedlings yesterday, and we're going to give some others to our friend Lisa, who just got a new apartment with a garden. Slowly but surely I'm working my way through all of them. I'm not sure what to do with the four dahlias I have -- they're in smallish pots, where they obviously can't stay, but they get devoured by slugs in the garden. (As we know from prior experience!) Guess I need bigger pots to keep them on the patio.

I'm reading Elizabeth Wurtzel's book "Prozac Nation." I remember all the clamor when it came out 25 years ago (!) but I never read it, and when I found a copy in the library I thought I'd give it a try. She strikes me as bright but awfully self-involved, which I seem to remember is the main criticism of the book. The New York Times recently did a series of articles about Generation X, looking back at some of the forces that shaped our culture, and this tome was mentioned. Even though I'm just barely an Xer (having been born in 1966, two years after the Boomer generation ended) I suppose I ought to have some familiarity with it, right?
Posted by Steve Reed at 7:12 AM