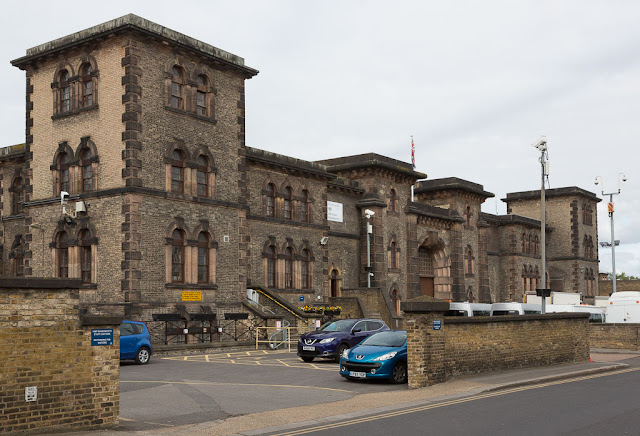 I took another long walk yesterday on the Capital Ring, from Balham to Richmond. I've now been all the way across South London, from the Thames to the Thames. Yesterday's walk was about ten miles.

I began the walk near Wandsworth Common, and passed the rather forbidding front entrance of Wandsworth prison. (Like all prisons here it is officially prefixed HMP -- "Her Majesty's Prison.") It was built in 1851 and has imprisoned the likes of Oscar Wilde and "Great Train Robber" Ronnie Biggs.

Leaving HMP Wandsworth, I wound through the Wandsworth Cemetery to the community of Earlsfield, where I took pictures on the High Street and popped into a Cafe Nero primarily to use the bathroom. (I bought an orange juice, too, because I felt like I had to buy something.) 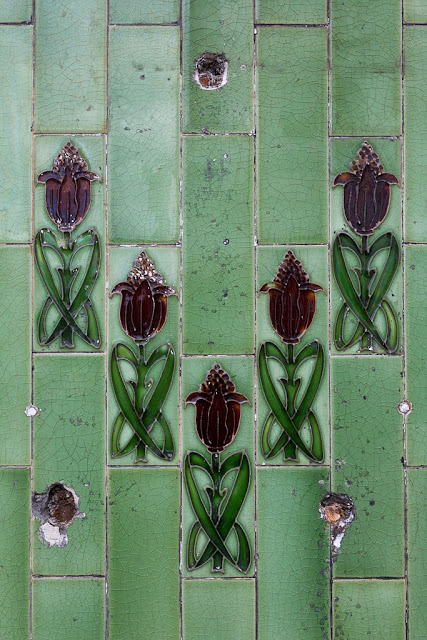 Near Wimbledon Park, I passed a shopfront bearing these old decorative tiles. They're a little the worse for wear, but still beautiful. 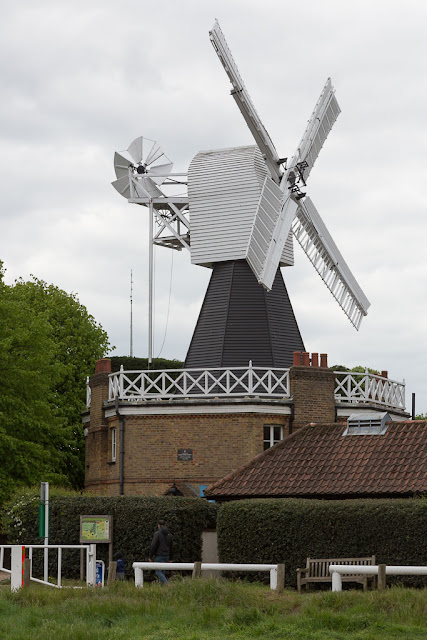 I then crossed onto Wimbledon Common, where I passed Wimbledon Windmill. (Say that three times fast!) It's the last remaining hollow-post flour mill in the country, according to my map. I have no idea what that means, really. There's a museum -- where I no doubt could have learned about hollow-post windmills -- but I didn't go. 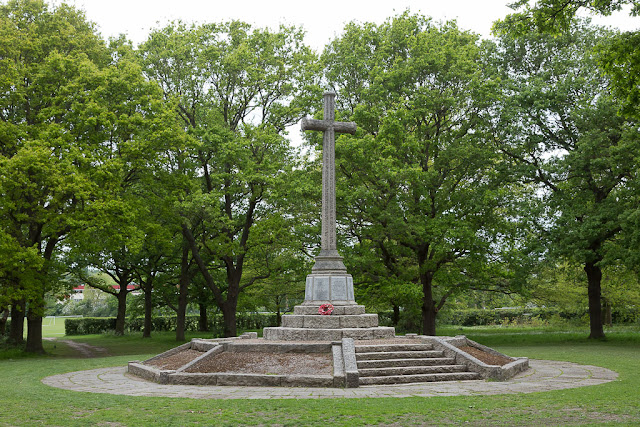 There's a beautiful memorial to the fallen of World War I near Kingston University, on the western edge of Wimbledon Common. It wasn't even mentioned on my map, which was surprising.

Then, because I was next to Putney Vale Cemetery, I took a little side trip to visit... 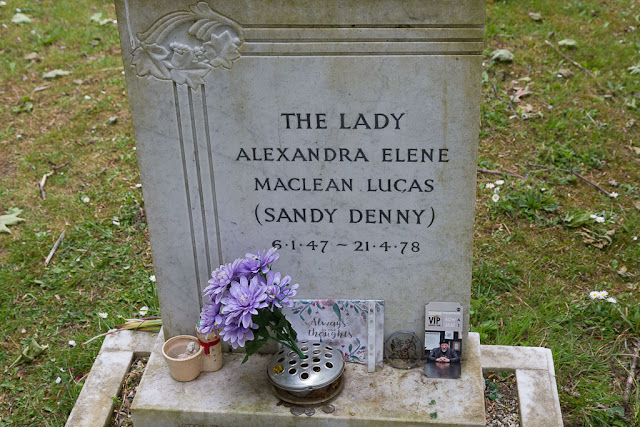 ...the grave of Sandy Denny, one of my favorite singer-songwriters. I blogged about visiting this same spot back in 2011, a few months after we moved to London. (My first time using British buses!) That seems like a long time ago.

Denny's grave was decorated with little objects left by fans -- a card, some coins, a few trinkets and what appeared to be a VIP pass from a Richard Thompson concert. Thompson was Denny's bandmate in Fairport Convention. 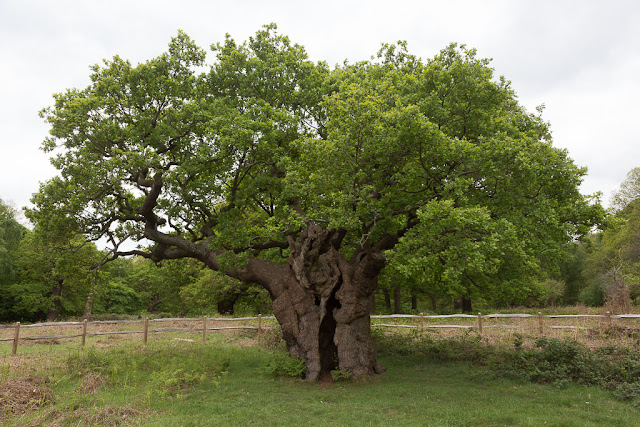 Back on the trail, I passed into Richmond Park, London's largest Royal Park at 2,500 acres. Some of the park's oaks are reputedly 700 years old -- that would make them acorns at the time of Robin Hood! This example (above) is so old and hollow that it's surrounded by a fence for protection. 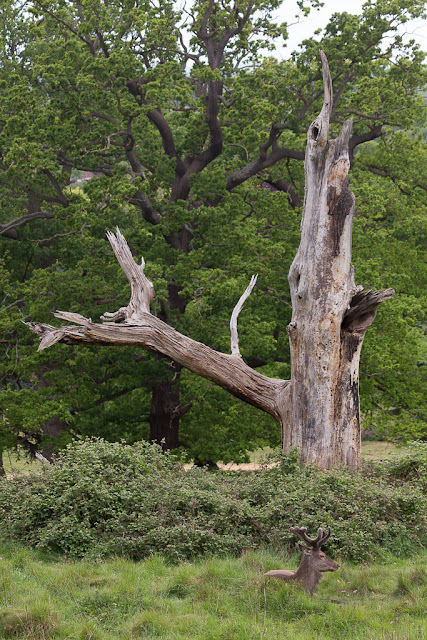 Richmond Park is also home to a famous herd of deer ("FENTON!") and I saw several of them lolling around. This buck must have thought his antlers blended nicely with that dead tree.

I climbed a hillock known as King Henry's Mound. Henry VIII is said to have waited there in 1536 for a flare from central London telling him that Anne Boleyn had been executed. I have no idea whether that little story is true -- I somehow doubt it -- but you can clearly see the dome of St. Paul's Cathedral, neatly framed by trees, using a handy provided telescope. It's a protected view -- nothing can be built that blocks that sight line.

Unfortunately I didn't get a picture. There were several people waiting behind me, and to complicate things even more, I injured my hand unlatching the gate leading to the mound. So I was too busy trying not to bleed on the telescope! 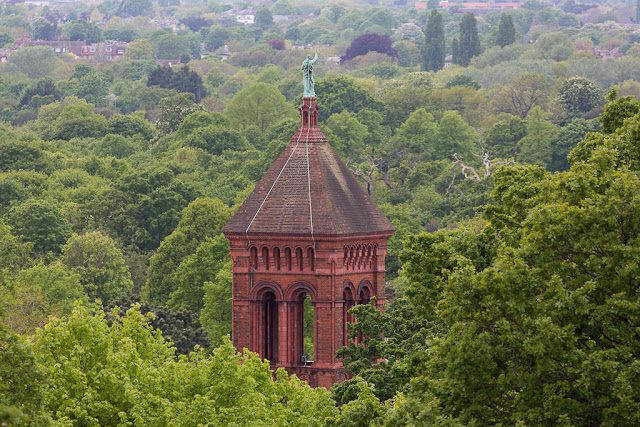 I did get a nice shot of the tower of the former All Saint's Church peeking up through the trees. 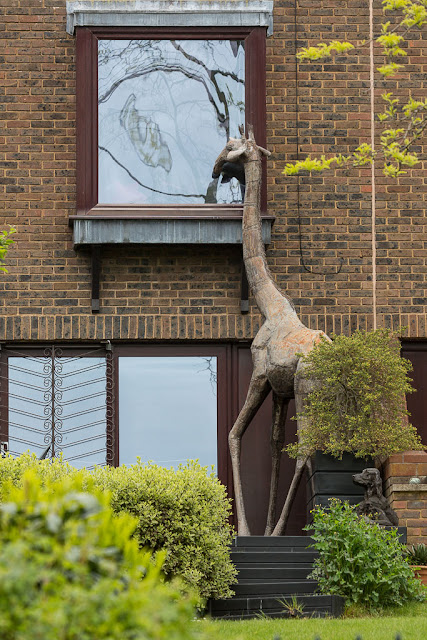 I stopped for a yummy vegetarian lunch at the Hollyhock Cafe in Richmond before making my way to the Thames riverfront, where I encountered this nosey giraffe peering in someone's window. The nerve! I caught the overground train home from there, somewhat tired and sore but (thankfully) no longer bleeding.
Posted by Steve Reed at 7:11 AM