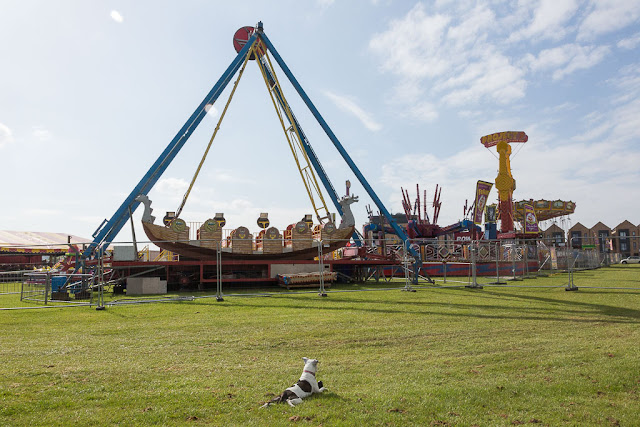 Dave and I had plans yesterday afternoon, so I knew if Olga and I were going to get a long walk, it would have to be in the morning. Right after breakfast I took her up to the Clitterhouse Playing Fields, where we discovered a fun fair had been set up with rides and whatnot.

Olga wanted to ride the Viking Boat, but alas, nothing was open yet. Besides, she probably wouldn't meet the height and/or weight requirement. 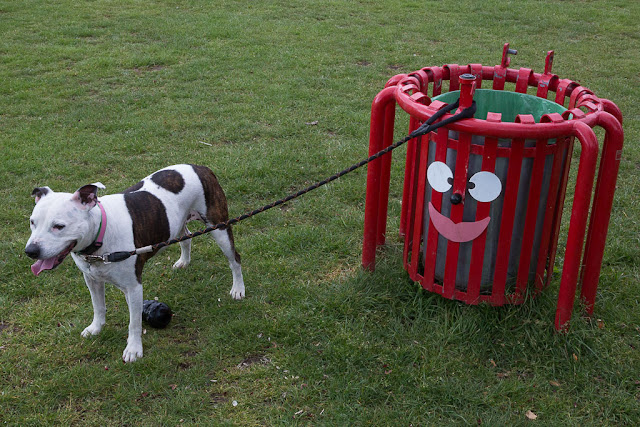 Then we walked over to Basing Hill Park, which we'd never visited before. It was no great shakes -- just a big grassy field -- but good for some Kong-throwing. We came home through Child's Hill Park, home of this goofy trash can.

I did some laundry before Dave and I caught a bus to Notting Hill for a pub lunch with our friends Chris and Linda. These are our pro-Brexit friends, and I'm always afraid we're going to wind up in a political conversation -- but even Brexiteers have trouble defending Brexit these days, the whole thing has become such a hash. Chris wound up grousing about politicians in general, and I know he was thinking they've mucked things up. But it's pretty much impossible NOT to muck up such an impractical and foolhardy proposal, isn't it? No matter how much you dress up a pig, in the end, it's still a pig.

Anyway, lunch was fun (we had lively conversations about other, less onerous topics). Then Dave and I came home and I mowed the lawn: 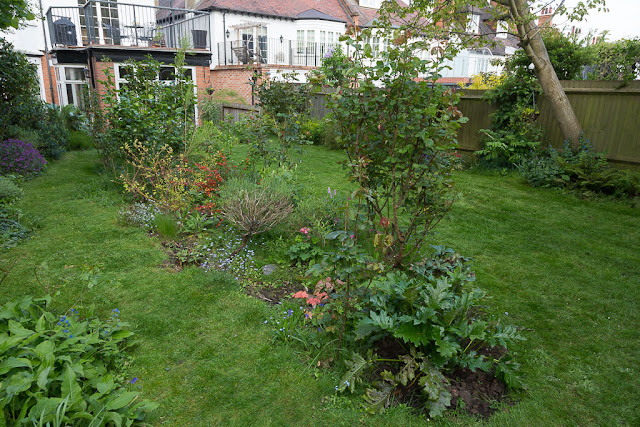 I got a strange letter from Citibank on Friday, telling me they're canceling my credit card. This isn't a huge problem, since I almost never use it, but I've had it for thirty years (yes, since 1989!) and it's my only one. I have two debit cards that I use much more often. Their letter said the account would be closed on July 17 "because Citi no longer services U. S. card products with a mailing address in your country of residence." They added helpfully, "Your creditworthiness wasn't a factor in our decision."

I wonder if this is a Brexit thing.

Honestly, I've considered canceling this card anyway, so I'm not too worried about it. But it seems like maybe I should have at least one credit card, doesn't it? Isn't it bad for my credit rating to not have one? Maybe I should transfer the billing address to one of my relative's houses in Florida. (I get paperless bills, anyway.) Or maybe I should just apply for a new card here in England. Decisions, decisions!
Posted by Steve Reed at 6:41 AM