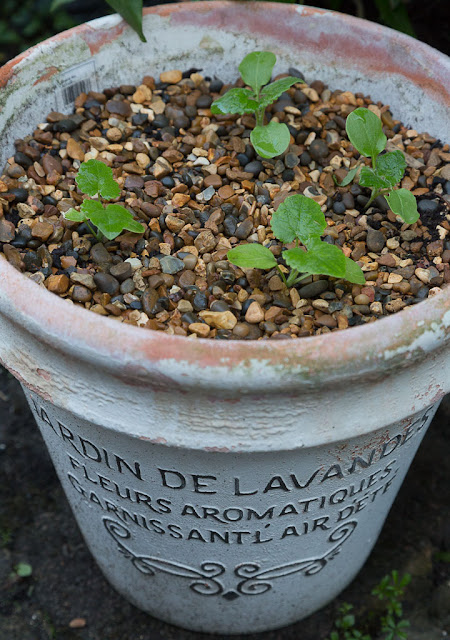 This is how I spent yesterday morning -- planting more seedlings. I put four honesty plants in this big clay pot and coated the top with a layer of gravel, hoping that will deter digging squirrels. We'll see.

The pot itself I found in a dumpster last week. It's painted white and has a French phrase written on the side:

I wouldn't buy it new, but hey, it was free! And we always need more pots. 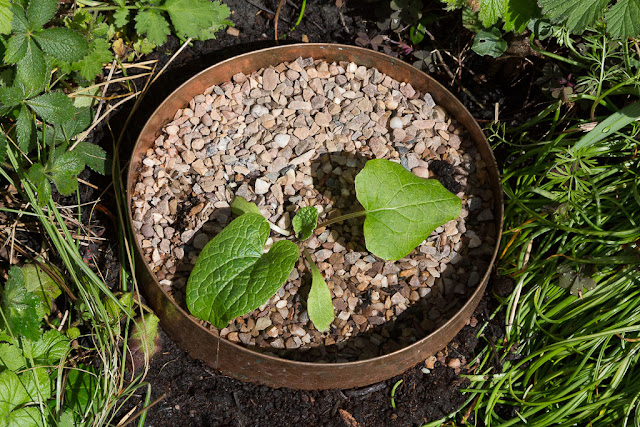 This is a burdock plant, which I put in the ground in our garden, surrounded by a copper "slug ring" and more gravel -- hopefully fending off squirrels, snails AND slugs. 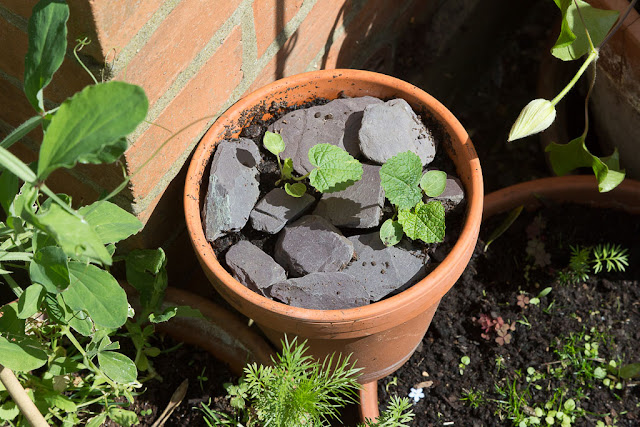 And here are some hollyhocks, in a pot with some stones to deter digging.

Every planting is a fortification! 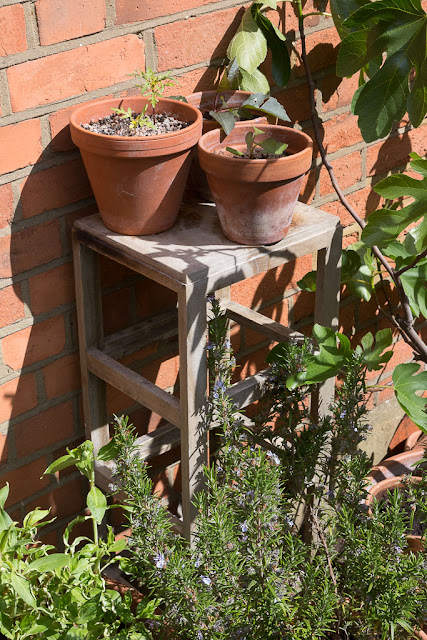 And then there's this tall plant stand, also scavenged from someone's streetside trash during a recent dog walk. I put a couple of seedlings in small pots atop it, hoping it would make the plants remote enough that squirrels won't bother them. (Squirrels are basically opportunists, interfering with what's closest at hand.) So far, so good. But I guess things could backfire if a squirrel gets up there and knocks the pots off!

Overall, I planted 16 seedlings yesterday, in both pots and in the ground. And I still have these: 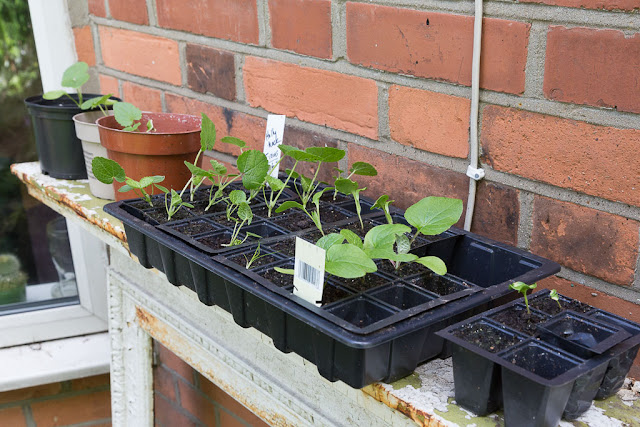 Jesus God! How did I wind up with so many plants?! And only a fraction of my seedlings sprouted!

Yesterday afternoon Dave and I went to see the Royal Philharmonic Orchestra's Film Music Gala at Royal Albert Hall. It's exactly what it sounds like -- a performance of movie music. There were old favorites including "Star Wars," "Raiders of the Lost Ark," "Star Trek" and even the very '70s theme from "Rocky," which really called for a spinning disco ball descending from the ceiling, but I guess you can't have everything. There were also some slightly less well-known pieces from the likes of "Dances With Wolves" and "Edward Scissorhands." Most of it was from the 90s and 2000s -- the oldest was "The Good, the Bad and the Ugly" from 1966. We had a great time! I'm not sure when I've so enjoyed a musical performance. It reminded me of watching Arthur Fiedler conduct the Boston Pops on PBS when I was a kid. We intend to get tickets for next year's gala, too!

One funny moment -- some boys were slipping past us to get to their seats in our row when one pointed at me and said, "You work in the library!" I had no idea who he was, but clearly he goes to our school. I felt like a celebrity, being recognized in public!

Last night, inspired by the gala, we watched "Edward Scissorhands" again. It was filmed about five miles from where I grew up, north of Tampa, and I remember visiting the neighborhood afterwards to see all the brightly painted, rainbow-colored houses. I also used to shop at Southgate Plaza, in Lakeland, which features prominently in the movie -- I specifically remember getting a pair of sunglasses repaired there, near where Joyce puts the moves on Edward in the beauty salon. Does that make me two degrees removed from Johnny Depp?
Posted by Steve Reed at 7:25 AM