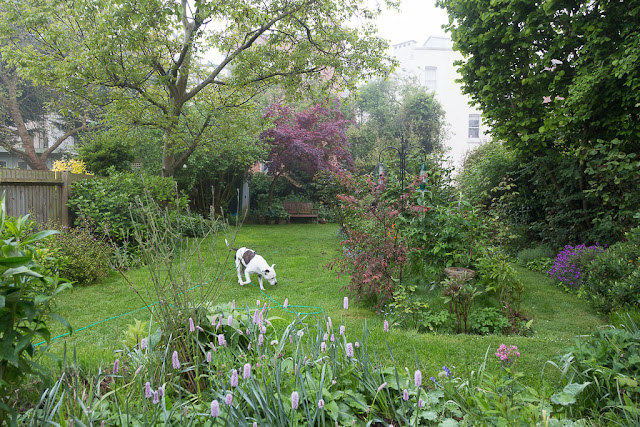 There's a fine mist in the air this morning. I've been scrambling to get the recycling and garden waste put out for collection, but that's all done now and I'm back in bed with coffee and Olga. (Dave is already getting ready for work.)

Everything seems remarkably quiet -- maybe because of the way mist muffles sound. I don't hear any traffic or street noise. The garden seems very lush and damp and fertile.

I finished the fiction inventory in the library yesterday -- we're missing about 25 fiction books, which is about twice as many as usual after a year of school. We used to have security gates at the entrances to the library, and they would beep (when they worked) if a student tried to leave with a book that hadn't been checked out. Last fall we removed the gates, because they were old and mostly didn't work right, and putting security tape in all the books was very expensive. We decided to experiment with having no security system at all.

That may be why a few more titles have gone missing. Fortunately most of them are not books we need to buy again. Even if they were, the question is -- is it cheaper to replace the books than to run that security apparatus? Probably.

I've still got some more inventory to go, but it's in specialist areas like reference, foreign language and professional development, and I don't expect anything to be missing from those categories. My best estimate is that overall, we'll be down about 30 books. That sounds like a lot, but not when you consider that we've got 27,000 in the collection. Plus, I suspect some of them went walking during the summer, when the library is technically closed but the space is still used for meetings and other functions.

It's also likely some of the missing titles were merely borrowed, rather than stolen, and will come back or turn up in classrooms and student lockers before the end of school. I haven't yet started my annual tradition of prowling through empty classrooms in the afternoons to retrieve books left lying around. Stay tuned!
Posted by Steve Reed at 6:40 AM