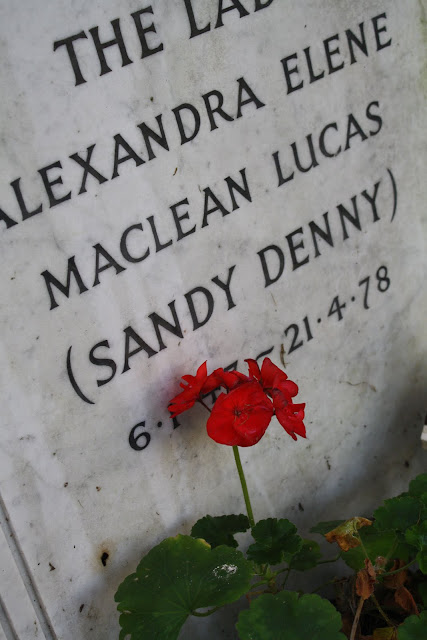 In the mid-1980s I briefly experimented with radio production, volunteering at a community radio station in Tampa. I helped put together one episode of a radio show, and in my free moments I had a great time digging around in the station's collection of vinyl records.

Among the albums I came across a boxed set of recordings by British singer Sandy Denny. Back then, I knew Denny only as the author of her best-known song, "Who Knows Where the Time Goes," which had been famously covered by Judy Collins. But I listened to some of the boxed set, and that put me on a path toward appreciating Denny as a singer and musician.

Denny was a lead singer for the folk-rock group Fairport Convention in the late 1960s, before embarking on a solo career that lasted until her death, at age 31, in 1978. I eventually bought one of her solo albums, "Rendezvous," as well as a "best of" anthology, and I enjoyed them both.

Now that I live in London -- Denny's home turf -- I thought I might try to find her grave. I did some research and found that she's buried in Putney Vale Cemetery, in southwest London near her former home in Wimbledon.

Putney Vale is not immediately accessible by tube, and it's located on a fairly well-traveled highway that -- at least on Google StreetView -- doesn't look particularly walkable. I decided I would have to take the bus.

I have been reluctant to use buses in London, mostly because I am intimidated by the spaghetti-noodle craziness of bus routes. (I avoided them in New York, too.) Whereas the tube and the New York subway have relatively few lines, buses seem to exist on a whole new level of complexity.

Anyway, yesterday morning I set out to conquer my unease about buses and pay my respects to Sandy Denny. The bus, it turns out, is not all that difficult, once you know which route to take -- easily determined on the web. 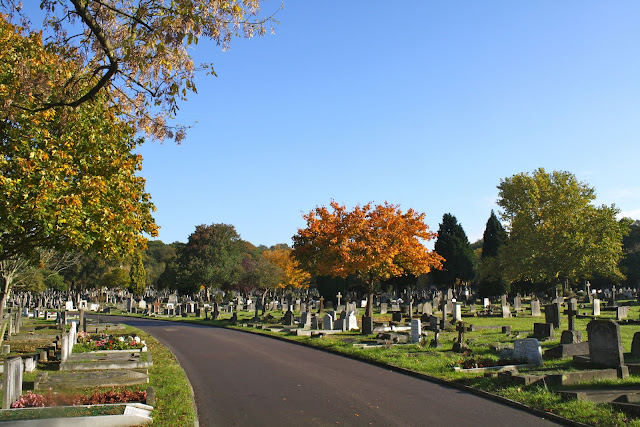 The bus dropped me off right smack in front of the cemetery's iron gates, and after about 20 minutes of wandering I found Denny's grave, a simple white headstone inscribed "The Lady," after one of her songs, above her married name. "Sandy Denny" is written beneath, almost like an afterthought, in parentheses.

I listened to some of her music, including the prescient "Who Knows Where the Time Goes," on my iPod as I stood at her grave, decorated with a single red, slightly bedraggled geranium. In Denny's case, her time was relatively short. I'd had a vague idea that she died of cancer, but it turns out that's not true -- she fell down some stairs in March 1978, and although she reportedly recovered enough to perform at least one more concert, she died from a brain hemorrhage the following month.

(Side note: I also found in Putney Vale the grave of Bruce Ismay, the chairman of the White Star Line and its doomed RMS Titanic. Ismay was aboard the ship when it struck the iceberg that sank it, and famously made sure to procure a scarce lifeboat seat for himself.)

Surprisingly, there's no footage of Denny performing her most famous song on YouTube. (There are some of those photo mash-up faux videos, but I hate those.) So here's a live version, instead, of another song, "Late November," which is also on my iPod.

She had a great sound and was obviously a talented musician. It is so sad when people like her (and Eva Cassidy) die so young.

Good for you for conquering your bus aversion and tracking down that lost lonely grave!

I enjoyed the song a lot - I like that type of music. Such a sad story - glad you found her grave!

I remember hearing her death announced on radio and since have heard a lot of her music courtesy of WMNF. Sad that her life was cut short...

I love that you paid tribute at her grave. Thanks for your recent visits to Willow Manor!

Since 2 years Sandy Denny become my biggest music muse and influence...i play some cover of her on my channel: http://www.youtube.com/user/maxghezzi

This are 2 new the video of her founded on web:
http://www.youtube.com/watch?v=GCdDxIYr9CU&list=UUxKdj533zhEwgEwkCNDjbKQ&index=7&feature=plcp

I WILL NEVER FOUND THE SAME VOICE...ANYWHERE...
max

The best folk singer/songwriter this country has ever produced. A tragic loss so young

Don't forget about her on the song "Battle of Evermore" , Led Zeppelin

Such a treasure in the hiatory of English music. A One Way Donkey Ride ended in putney, but she lives on through the beauty of her songs.