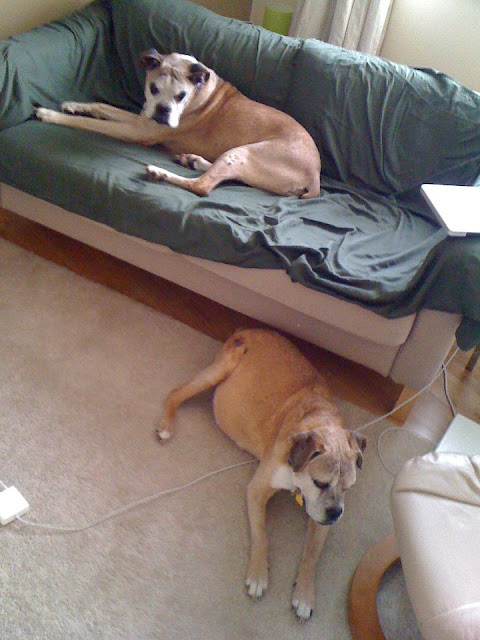 Finally! After more than three months apart, we've been reunited with Ernie and Ruby. They were delivered less than an hour ago, and now they're both sound asleep. The poor things are probably exhausted after their bewildering experience in the bowels of an airplane and being poked and prodded through customs.

It seems that everything went without a hitch. Ruby seems lively and happy, and Ernie is his usual dopey self. I was so relieved when I got the call about 8 a.m. that they came off the plane in good condition. Kudos to Continental Airlines and Airborne Animals, our animal importer, for all their hard work!

I'm so glad that when we started the process of preparing them for the move, back in late March, we decided to prepare Ruby for the trip, even though the vet said he didn't think she'd live that long. Imagine if we'd decided against getting her rabies shot and $600 blood test? Where would she be now? Let's hear it for blindly plunging forward on some kind of crazy faith.

(And just to look back, it's been a year and a half since we were first told she might be fatally ill. For part of that time her illness went undiagnosed, but as I understand it now, she has right-side heart failure, exacerbated by the presence of a lime-sized growth inside the pericardial sac. No one's looked at that growth in more than a year, so I don't know if it's grown or shrunk -- but her heart is definitely still impaired, based on the fluid accumulation in her belly.)

I'm also glad that we hired someone to ship the dogs and do the last-minute preparations. It was the smartest decision I've ever made. I would not be happy right now if I were all jet-lagged from a red-eye flight.
Posted by Steve Reed at 12:13 PM

yaaaay! so happy you are all reunited.

What a sweet reunion! Did they seem happy to see you? They look extremely well adjusted given the new surroundings and all they had been through getting there. You were so smart to hire professional dog movers!

Enjoy being a family once again!

Hooray! I can't think of a prettier picture than that of both Ruby and Ernie lounging in their new home.

Aw - I just got a big grin when I saw the picture - so glad they got there safely!