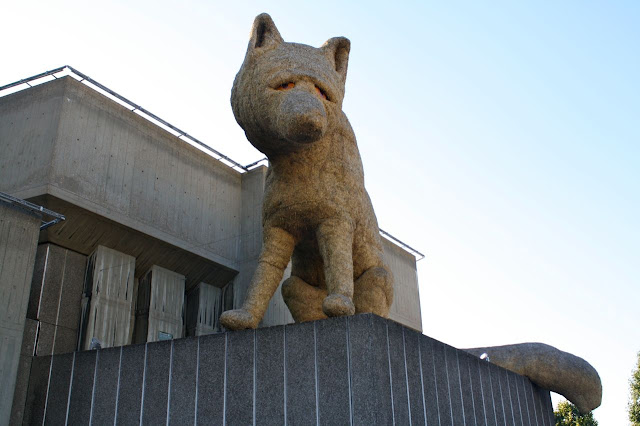 When I went walking with Sally and Liz last week, we came across this huge straw fox perched on the Southbank Centre, part of the arts center's 60th anniversary celebration of the 1951 Festival of Britain. The festival, held on the same site on the south bank of the Thames, was at the time conceived as a post-war mark of progress for a battered nation.

The fox is an outgrowth of a tradition at a farm in Cheshire, where each year people build a huge straw sculpture. Southbank Centre arranged to have this year's sculpture transported to London, and there are explanatory murals and photographs nearby showing how that feat was achieved.

"As we learn to become more careful with our resources, what better animal is there to represent wily resilience than an Urban Fox? These creatures have long been considered to be a uniquely British phenomenon," reads a display adjacent to the fox.

"Everyone remembers locking eyes with a fox in a garden or street. Urban Fox recreates that moment of wildness on a grand scale, so for a fleeting instant you are not sure who owns this space."

Personally, I think this fox is a little creepy. But then, urban foxes can be a bit creepy. I took Ernie and Ruby out for a walk the morning after they arrived, before the sun came up, and one ran across the parking lot right in front of us, watching us warily, as silent as a ghost. (Fortunately, the dogs, being old and somewhat blind and deaf, were none the wiser.)

I saw two in the courtyard this morning, too, making their high-pitched barks and squeals. A little creepy, but also pretty amazing.
Posted by Steve Reed at 6:26 AM

I never thought about foxes living in cities, but it sounds like you have quite a few around. There is some advantage to walking a dog who is mostly deaf and blind. It greatly diminishes the tendency to lurch!