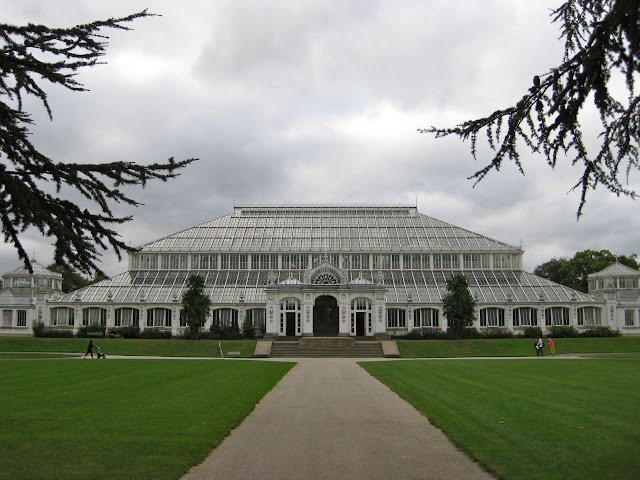 Yesterday I set off on another walking adventure, this time to Kew Royal Botanic Gardens. The gardens are located to the southwest of us, a little more than five miles away. I started walking thinking I might not have much energy to explore the gardens by the time I got there! 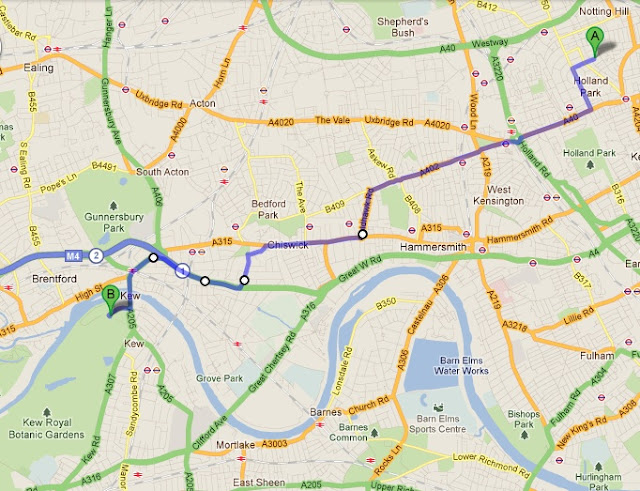 This is roughly the route I took. (Click the map to enlarge. I'm kind of into this mapmaking thing, as you can tell!) And actually I still managed to see about a third of the gardens -- which are huge. (Slogan: "Plants People Possibilities.") 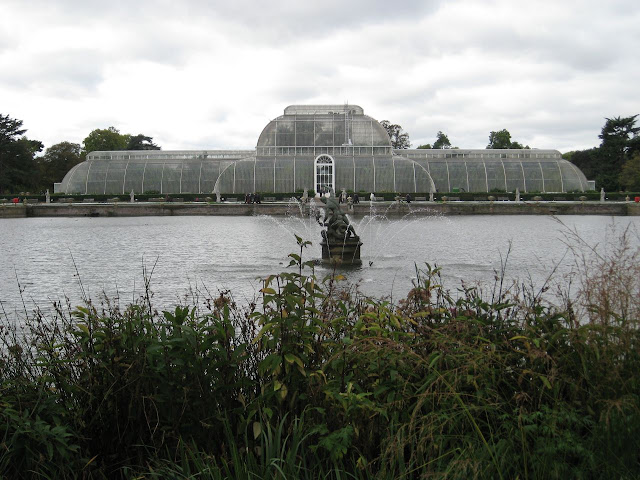 Because Kew Gardens is hundreds of years old, some of the plants have been in place a long time. The palm house (above) contains a sago-type palm dating from 1773 -- older than the United States! It was so big I couldn't get it all in one picture. I also saw an Italian stone pine planted in 1846 and a Chilean wine palm that reached to the rooftops of the largest greenhouse. (That's the greenhouse in the top picture, called the Temperate House. It dates from Victorian times.)

I resisted the urge to bow down in tribute to the coffee plants, and I saw huge Brugmansia trumpet flowers, a relative of the Datura plants known to induce hallucinogenic trips in enterprising Florida teenagers. (Not including me, of course. I didn't hear about that phenomenon until long after I reached adulthood. Which is just as well.) 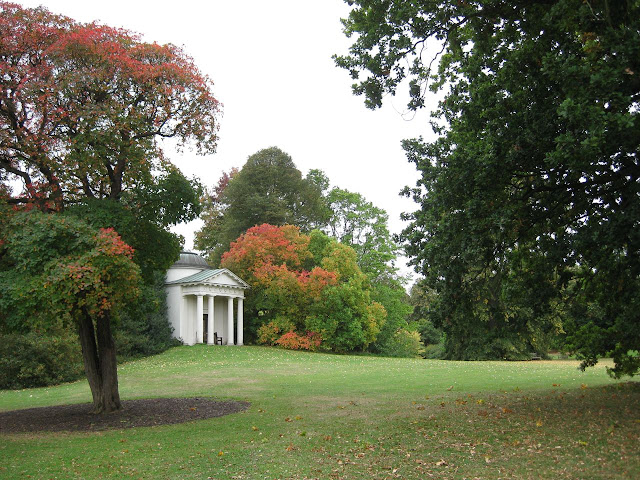 As you can see, fall is coming to London. A part of the gardens I didn't see includes an elevated walkway through the canopy of a stand of trees -- the garden's literature suggests coming back to see that later in the fall. Dave will definitely want to see Kew Gardens, as much as he likes gardening, so that sounds like a good outing in upcoming weeks!

-- Sorry to hear about the death of Steve Jobs. It's certainly an illustration of the axiom that wealth, fame and intelligence can't stop the inevitable. I can honestly say that Apple products have transformed my life, and God knows they're easier and more pleasant to use than PCs. My mom bought our first Apple computer in about 1983, and I remember using it to create my own world atlas, writing blurbs about the countries and little programs that would draw their flags. (Never mind that the computer screen was limited to shades of green.) I can't believe I was ever that ambitious.

-- Our dogs are in a kennel in New Jersey, and scheduled to board their flight today. They passed their last-minute vet checkup, but the vet and the animal mover both expressed concerns about Ruby's heart condition. We all agreed to go ahead and ship her, because really, what other option is there? I did not sleep well last night, and I suspect tonight I'll be nervous too!
Posted by Steve Reed at 7:16 AM

Kew Gardens looks like a place I'd love. I think I'd have to spend days and days there!

I love Kew Gardens. The Brits really know how to do things like this.

We are in a state of mourning for Steve Jobs. I think the continuing success of Apple will be the finest tribute he could have imagined. He put up a valiant fight against an awful disease.

I hope Ruby and Ernie fare well as they cross the sea to be reunited with the two of you. I'm sure it will be a sweet reunion!