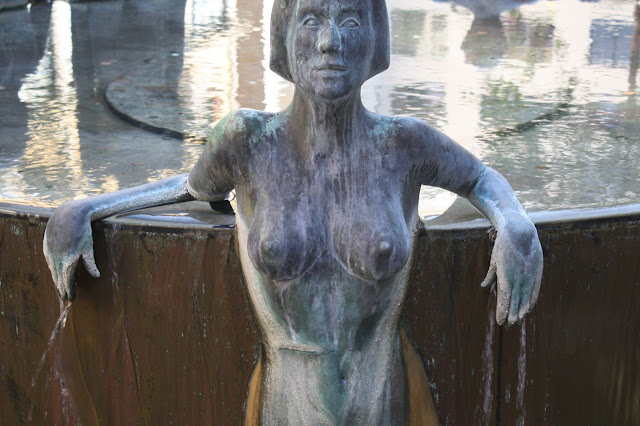 Remember what I wrote recently about the coming of autumn? Well, we've had a slight change of plan. The weather gods decided to give us another week of summer, and the last few days have been sunny and unseasonably warm, with temperatures in the 80s. It seems like everyone in London is out and about, sunbathing in the parks and strolling around in t-shirts.

I was among the hordes of wanderers yesterday, when I met up with Sally and Liz for brunch in Bermondsey, on the south bank of the Thames. We then walked through the neighborhoods around Tower Bridge including the curiously named Shad Thames. It's an area of old spice docks and warehouses that have been turned into gourmet restaurants and such.

We wondered about the origin of the name. I thought it might have something to do with shad, the river fish, but according to the always-reliable (ha!) Wikipedia it may be a corruption of "St. John-at-Thames," a reference to a church once located in the area.

We found an interesting fountain, which my Googling tells me is called Waterfall by the sculptor Antony Donaldson, from 1991. It features cavorting water nymphs, with everyday items like books, a watch and a camera -- all cast in bronze -- seemingly scattered at the fountain's edge. I especially liked the hands of the nymphs and the way their lime-crusty fingers dipped into the pool. 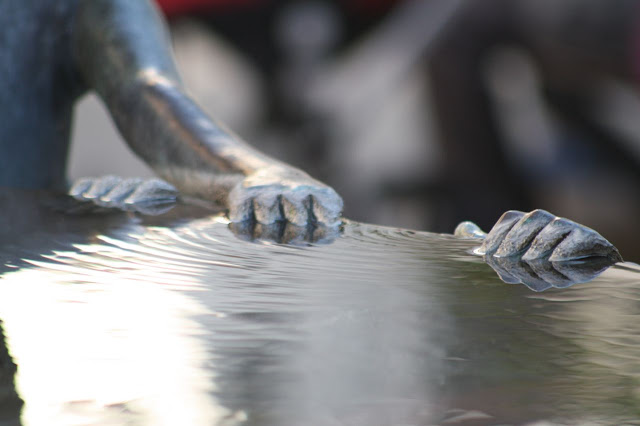 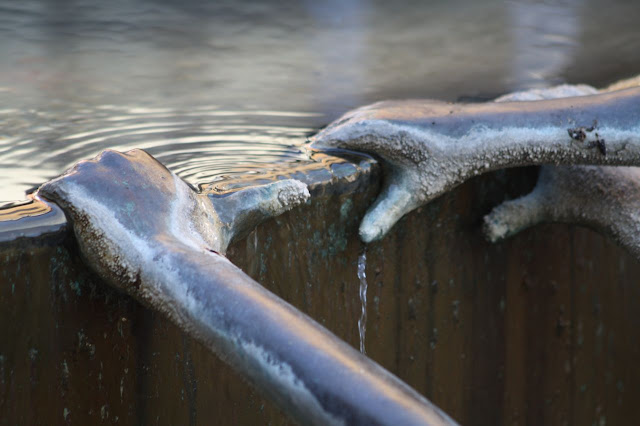 The pigeons liked them too. 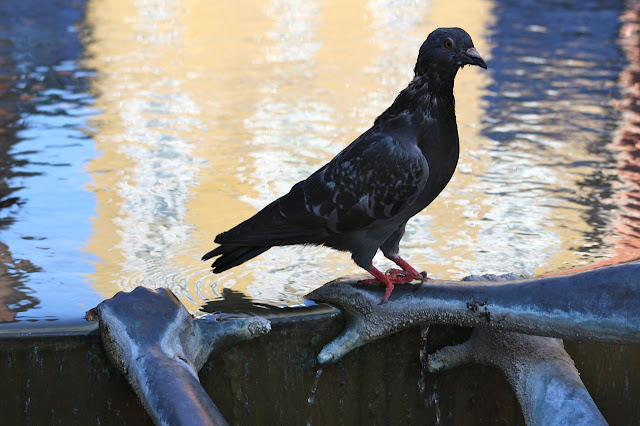 After exploring Shad Thames, we had coffee at Borough Market -- a huge outdoor food market that was mostly closed on Sunday -- and wandered slowly westward all the way to Waterloo Station. Along the way we stopped in at the Tate Modern (mostly for a quick bathroom break), had a late afternoon beer at Royal Festival Hall, and watched skateboarders in a graffiti-plastered skate park on the riverbank.

It was great to finally see Sally and Liz, who have been my blog pals for years. We hadn't yet had a chance to meet up since I moved to London. And being outdoors was ideal -- everyone tells me to take advantage of the summer while it lasts, because winters in London are long and dark!
Posted by Steve Reed at 7:14 AM

Oh. I didn't realize you had never met. Well, thank goodness! Didn't you meet Sally at the blogger maypole dance? Weren't you there?

We have some history behind us by now. We've been friends for years. Crazy.

LOVE the fountain and love reading about your adventures in London. Are you settling in? Are you homesick?

Oh, we've met before -- at the maypole dance and when Sally and Liz came through New York a few years ago. I just meant I hadn't gotten together with them since I moved here.

I am not at all homesick, and I am settling in. I am thoroughly enjoying my time wandering around the city and getting to know so many new places.

Lovely weather...That fountain is great too...The sculptor has a sense of humour...Glad to hear you don't suffer homesickness. I wouldn't either. The next time you see Sally, please say hi for me. We got down into the sixties yesterday, so there may be hope for winter yet.

I found your blog when researching the fountain you have pictured here. I have photos of it I took 5 years ago when I visited London and stayed at a friend's flat near there. I've always loved that fountain. How exciting to move to London. It has to be my favorite city in the world.

Sharon, thanks for stopping by! It is a great fountain -- and a great city!